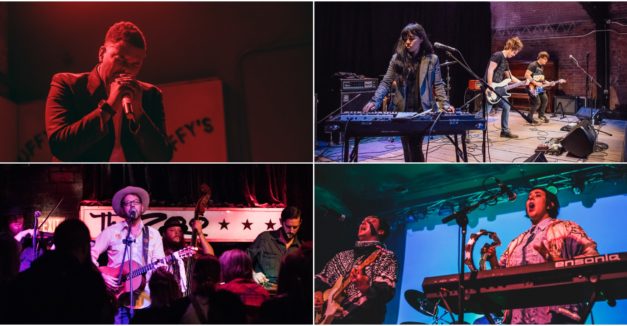 The sixth-annual Take Cover concert lineups are set and the cover choices are out in the open. In advance of this weekend’s two-night affair, get ready with our HN Radio playlist. It’s streamable below or at the top of the website.

Take Cover happens this Friday at The Bourbon, presented by Ameritas, and Saturday at The Waiting Room, presented by Medical Solutions. Twenty-three Nebraska bands will take the stage to reimagine, reinterpret and re-contextualize some of their favorite Nebraska artists.

Some of their choices appear on today’s playlist: For Against’s “Amen Yves” (chosen by Life Is Cool); The Good Life’s “A New Friend” (chosen by See Through Dresses); and Kait Berreckman’s “Keep It Up” (chosen by The Morbs).

Hear these and more in the playlist below. RSVP to Take Cover Lincoln here, Take Cover Omaha here, and check out the full guide to both Take Cover concerts here.

As the changing political climate threatens to affect underprivileged and marginalized folks and the organizations that benefit them, an increasing number of  music community members are stepping up to help. For many, like Lincoln musician Rachel Tomlinson-Dick, sexual assault and the pervasiveness of rape culture is a pressing matter not only to society at large but also, more directly, the music scene itself.

“Rape culture is all around us and is something that women and femmes have to constantly navigate,” she says.

Tomlinson-Dick is working with The Commons LNK on “Rock Against Rape Culture,” an upcoming concert on Saturday, Feb 11 which will benefit Lincoln’s Voices of Hope, a Lincoln organization which provides services to empower those who have experienced relationship violence, sexual assault and related forms of abuse.

“I’ve talked to many people in the music community that have discussed instances of assault and abuse,” says Tomlinson-Dick, who is one-third of Lincoln garage rock band Bien Fang and who performs solo as Miniature Horse. “It’s a pretty common experience that at a show is the first place we were ever groped, that a scene sided with an attacker or abuser, that we stayed silent about these experiences for fear of alienation or reprisal.”

In addition to benefitting Voices of Hope, the event looks to educate. There will be a presentation and facilitated discussion that evening, starting at 7 p.m., which will focus on sexual consent and how to combat rape culture. Music starts at 8:30 p.m. with The Morbs, Boner Killerz, Once A Pawn and Bien Fang.

Tomlinson-Dick says the moment demands the community work together toward making a safer and inclusive space for all of its members. That includes the music community within.

“We, as a music community, need to take responsibility for the fact that this isn’t just some abstract issue, it is our own problem as well,” she says. “And we need to take active steps toward supporting survivors and holding one another accountable.”

Lincoln indie rock band Walk By Sea has released a new video in preparation for its upcoming album release.

“Moratorium” dropped yesterday, shared one month ahead of the band’s debut full-length, on which the song will appear. The video, shot this past summer by Hannah Willison, depicts the simple life of an infant juxtaposed with the song’s existential anxiety. Here’s the band with more:

“The song reminds us of how fleeting life is and the search for something meaningful in a seemingly meaningless life. In the face of an infant, it’s difficult to have these thoughts, but they’re a reality and most of us distract ourselves from these questions every day.”

Watch the video below. The album release show is Friday, Feb 24 at Duffy’s Tavern with Better Friend and See Through Dresses. RSVP here.

The song is called “IDKWTD” and you can hear it below. It calls upon the dreamier aspects of both bands as it drifts wistfully along, capturing the drag of finding a life after a significant other.