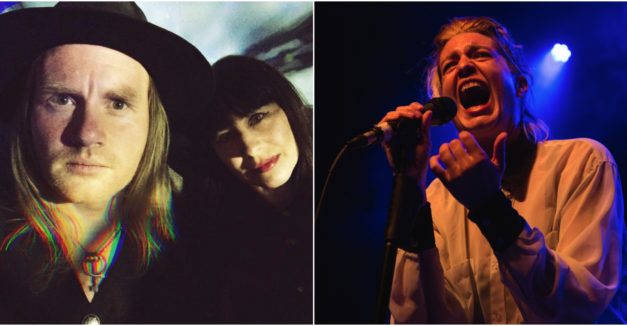 The first round of SXSW artists have been released, and already two Nebraska acts have made the list.

Omaha indie soul band High Up and electronic duo Closeness will head south to Austin early next year, both grabbing official spots on the massive annual music/arts/tech event which happens March 13-19. The former, led by vocalist Christine Fink, adds to what has a been a breakout year, locally speaking. The latter, comprising Todd and Orenda Fink’s first joint venture, emerged this past April.

It seems unlikely the Cornhusker State tally will stop there. Last year, 11 Nebraska bands found their way onto SXSW billings both official and unofficial, many of them featured at the Nebraska Exposed showcase at Cheers Shot Bar.

As Halloween approaches, two Lincoln-based bands are fitting themselves for cover-band costumes.

Salt Creek and Mad Dog & the 20/20s have planned a trio of cover shows around Halloween weekend in which they and one other act will take on another band’s persona. For all three — Oct 28, 30 and 31 — Salt Creek will cover Weezer, while Mad Dog will play No Doubt (seems fitting).

For our money, the choices seem spot-on. Schedule below:

Salt Creek was recently part of our Good Living Tour live performance video project, released last week. Watch all 12 videos — including that band’s acoustic version of “Free” inside the Museum of Nebraska Art in Kearney — here.

Throughout Lincoln Calling, Hear Nebraska’s photography team captured performance shots of nearly every artist in the crop of 120-plus. But the stage isn’t the only story.

Our Instagram portrait series, happening all day Tuesday, gives an intimate, alternative look at the downtown festival and its various performers. The first, a fittingly black and white photo of HIDE’s Heather Gabel and Seth Sher after their Plack Blague industrial showcase set, went up earlier this morning:

Tonight, electronic duo Zeds Dead comes to Sokol Auditorium, 2234 S 13th St, on its Northern Lights Tour which includes dates in southern and western U.S. and a handful in Germany. The Canadian act — comprising Dylan Mamid aka DC and Zachary Rapp-Rovan aka Hooks — initially gained notoriety in the online community, offering original remixes and music before becoming an international touring staple in the early ‘10s, combining aspects of garage, house, hip-hop, glitch and drum and bass.

Also tonight, The Interrupters come to Lookout Lounge, 320 S 72nd St, with Bad Cop/Bad Cop and Mad Dog & the 20/20s. The Aimee Allen-led punk/ska band released its debut record in 2014 on Hellcat Records, following it up with a swath of touring and now a sophomore album, Say It Out Loud. Allen is a longtime punk vocalist/singer-songwriter, cutting a pair of solo albums in the mid-aughts and collaborating with the likes of Mark Ronson, Don Gilmore Sublime with Rome and Rancid’s Tim Armstrong (who directed the video below). Tonight’s all-ages show starts at 8 p.m., entry is $14. RSVP here.

And in Lincoln, get your sad-person nostalgia fix at Duffy’s Tavern, where DJ Party Poison (former HN intern and I Forgot To Love My Father frontman JP Davis) hosts emo night during $1 Dad’s Beer Night. Rest assured: the My Chemical Romance will roll. No cover, RSVP (and drop in requests) here.

Find a fuller listing of this week’s shows at our statewide events calendar here. If you do not see your show or one you plan to attend, let us know in the comments or email us at news@hearnebraska.org (where you can send all your news tips and stories ideas).