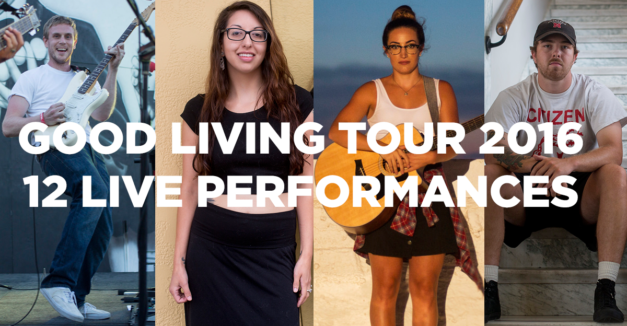 There is an undeniable, inextricable connection between an artist and the environment in which they learned to create. Heartfelt or mournful, joyous or heartbroken, strong are the formative powers of home.

As you’ll see in the following Good Living Tour live performance videos, the mark of that bond remains, regardless of the artist’s present locale. It’s there in the pop country sweetness of Rachel Price, who has taken her aspirations from O’Neill to Nashville. It’s there in the modesty of Corbin Wheaton and positivity of Baker Explosion, who channel their creative energies into their respective hometowns of Lyons and Norfolk.

No matter the circumstance, one thing rings true throughout: Home is ever-present in your heart.

View all 12 stripped-down songs below, shot throughout the 2016 Good Living Tour and featuring artists from each community performing in their hometowns.

In the center of Ord’s town square, the Sandhill-town native Lost County Road shed their pride for a mournful breakup ballad on the steps of the Valley County courthouse — built one year after settlers laid out the town in 1875.

The connection amongst Nebraska’s artists — visual and performing alike — is a tangible one made all the more palpable by this juxtaposition of veteran Kearney musicians Nathan Richardson and Chase Thompson, who perform this reflective, emo-rooted song inside the Museum of Nebraska Art (MONA).

As we age, our childhood memories seem to remain simple, providing a mental retreat from the present and a longing for those dearest. A veteran of Central Nebraska’s edgier folk community, Tyler Smith reminisces inside a beloved, hometown dive The Glass Bar.

Though its historic opera house and devotion to Willa Cather form the center of Red Cloud’s cultural community, the boys of Lester Junction and its feel-good rock are undoubtedly a locally beloved part of it. Surrounded by the markings of performers’ past, the band set up shop backstage for this ballad of love and self-worth.

Hastings native Jesse Dassinger and For The Birds played their hometown for the first time in five years this past summer, having spent much of their recent time touring around the states. Prior to that concert, Dassinger plays a stripped-down confessional inside Hastings’ downtown concert venue The Lark.

Jason and Benjamin Baker take an optimistic, uplifting approach to songwriting, using their multi-instrumentalist talents to serve a potpourri of pop, soul, reggae and rock. Whether joined onstage by a full band or simply as a fraternal duo, as in this video, Baker Explosion never falters in its positivity.

Ask a Lyons, Neb., resident who one might talk to about music in town, and you’ll likely be given Corbin Wheaton’s name. A former touring metal musician, Wheaton now creates out of his loft apartment and produces a monthly swap meet at his family’s diner Hi-Way Cafe. In this ode to his hometown, Wheaton gives perhaps the most earnest — and on a third take, well-earned — performance of the bunch.

While Rachel Price’s star spreads far beyond the Cornhusker State, that doesn’t make her career any less rooted in her origins. A two-year Nashville resident, the O’Neill native’s tuneful pop country often revolves around her hometown, her hit song “Little Nebraska Town” receiving regular airplay. Price raced from her Good Living Tour performance at Ford Park to downtown O’Neill just in time for a twilight rooftop performance atop the historic Golden Hotel.

Grant resident Matt Chandler-Smith is known throughout the southwest Nebraska region as a talented musician, his band constantly evolving throughout its 10-year existence. But he’s also noted for getting other community members involved in music. View both qualities in this performance at Grant’s Meadowlark Gallery.

Country singer/songwriter Matthew Scott has the twangy voice and acoustic chops to garner local fame throughout western Nebraska, proving it solo for hundreds of fellow Sidney residents during the Good Living Tour. This acoustic performance — filmed earlier in the day — is decidedly different in tone from the rest of the pack as a rallying cry and lyrical highlight reel for Husker Football fans everywhere. From Jonny Rodgers to Tom Osborne to the late Sam Foltz, Go Big Red.

Time Trap offers a familiar brand of Americana, its longing harmonies and rollicking rhythms recalling the likes Pure Prairie League. In this performance, the band rides the radio tunes and distant memories from within Imperial’s VFW all the way back home.

Homemade Crazy seems to be finding a footing after performing often in communities surrounding its hometown McCook. Frontwoman Breezy Ortega gives a quirky, encouraging performance in this video — which features the lone piano-based tune of the bunch — in the dining room of local eatery/listening room Sehnert’s Bakery Bieroc Cafe.