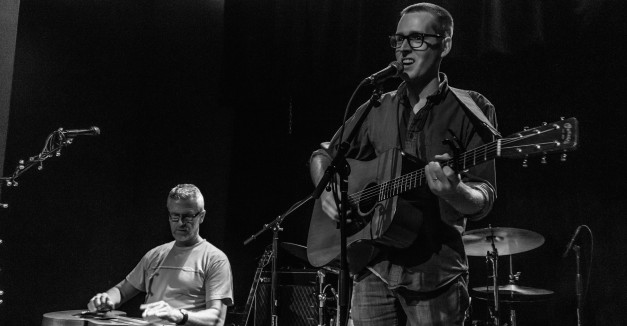 On Sunday, July 19, Film Streams is screening Heaven Adores You, the second documentary in its “Sights on Sounds Summer 2015” series. The feature focuses on Omaha’s native son, Elliott Smith, and the musical role he played in his adopted hometown of Portland, Oregon. It will also examine the influence that he had on musicians and songwriters abroad.

By combining interviews and tape-recorded conversations with the late Smith, along with interviews with his family and the musicians who took influence from his musical stylings, director Nickolas Dylan Rossi molded the documentary as a tribute that should prove to be as intimate as its subject.

Nickolas Dylan Rossi, normally a cinematographer, took the director’s chair for this project, his first documentary film. HN writing contributor Andrew Samson caught up with Rossi ahead of Sunday’s showing to talk about his directorial debut and what made Elliott Smith accessible and influential.

Hear Nebraska: Can you explain how you decided to make this documentary?

Nickolas Rossi: I photographed and edited a short tribute to Elliott the day after he died in Los Angeles in 2003. I was familiar with his music through my years of living in Portland in the mid to late nineties, so I was affected by his early death at the time. That tribute video started a few conversations about why people are still discovering Elliott’s music today and what his impact has been on music. I think that it’s important to keep his music relevant, and I couldn’t think of an artist that I wanted to dedicate so many years to making a film on than Elliott Smith.

HN: You’ve done a lot of work with cinematography and photography. How did the skills that you acquired in those jobs help in the making of your directorial debut?

Rossi: I always felt like there was a cinematic element to Elliott’s music and so I wanted to really see what that would look like if we were to make this as much of a visual and sonic experience for the fans. My skill set as a cinematographer just made it easier to explore his music with a camera in hand, to tell a story without words. But I have also been fortune to learn a great deal of how to take on a project like this by shooting other people’s films and being present for the interviewing process. I had a great collaboration with the other cinematographer, Jeremiah Gurzi, so it was very easy to move over to the director’s chair and focus on the words that I needed as well to tell this particular story.

HN: What do you hope to accomplish when people see your documentary on Smith?

Rossi: I hope that this stands to be an introduction of Elliott’s music for those who aren’t familiar with him, as well as an example perhaps of a different side of Elliott Smith—one that wasn’t always as “doom and gloom” as the media often made him out to be and perpetuated after his death. I hope that after seeing the film, people feel compelled to add Elliott Smith into their music collection, and share his music with the next generation.

HN: You were in Portland at Portland State when Elliott was playing around there. Any stories that you would like to recount about seeing him play?

Rossi: I lived in Portland between the years of 1994 to 1999, so my memories of Elliott are probably pretty uneventful. He was a kid in his twenties playing in a rock band ( Heatmiser ) before starting to play solo shows that would really quiet a room. I think the more significant memories come from seeing him after he left Portland around 1997 or 1998. It seemed like when he was back to play a show that it was really quite a buzz.

HN: Why do you believe that Elliott’s music is so accessible to so many musicians and listeners?

Rossi: I think Elliott was very proficient at observing what was going on in a room and being able to write about those situations. I think his songs contain the thoughts and feelings that we are all familiar with in very universal themes of sadness, hope, jealousy, love, self doubt, shyness, etc. I think what makes Elliott’s songs so accessible can best be stated when Autumn De Wilde’s said in the film, “ ..he gave us the words that we couldn’t find when we were sad, and he may have left just enough out of it so that it could occupy any time period, any relationship– and that is always something that makes something live beyond you..”

HN: Elliott was a very quiet person (from the interviews I’ve seen) and his music is extremely quiet and intimate. The film looks very intimate. Would you classify the documentary that way? If so, how do you create that feeling of intimacy?

Rossi: I think that Elliott’s music really speaks for itself, so I wanted to honor that as much as I could in the film. His friends and the people that knew him really all seemed to care for him a great deal, and it’s clear that they still miss him to this day. That feeling of intimacy really came from just talking to these people about their friend, who just happened to have this rather particular brush with fame. But there was no shtick with Elliott Smith. He was genuine to the end, and I think his friends were compelled to remember that about him. It was a really beautiful experience to sit with so many folks who knew Elliott and just have them talk about their friendship with him. I hope it gives the audience a little bit more of the story of where the music came from and the journey that Elliott was on.

words and interview by Andrew Samson

A new DJ project is planning a string of events in Kearney, starting this weekend with a showcase of local dance talent.

Dr DJs, the husband-wife duo of Nicholas Abitia and Paloma Valero, will present “GLOW in the Park” Saturday at Harmon Park. Starting at 6 p.m., they’ll spin and eclectic mix of pop and dance tunes, with a freestyle dance battle beginning at 8 p.m. There will also be free giveaways, raffles, neon paint and a “selfie booth.”

Originally from Los Angeles, Abitia says that he was inspired by the rising art and music upon arriving in Kearney. While in LA, he and his wife assembled a hip-hop collective and produced shows, webcasts and scratch sessions. They found that with alot of it’s younger residents listening to progressive music, Kearney would embrace that same attitude.

“Kearney is already a melting pot for culture and originality thanks to the UNK campus and students that call it home,” Abitia says. “We wanted to get involved by putting on Safe, Fun, and Exciting events for all who wish to attend.”

Hear Omaha went off without a hitch yesterday, as Brad Hoshaw and the Seven Deadlies took the stage at 13th and Howard. Our Samuel Bennett covered the show in photos. 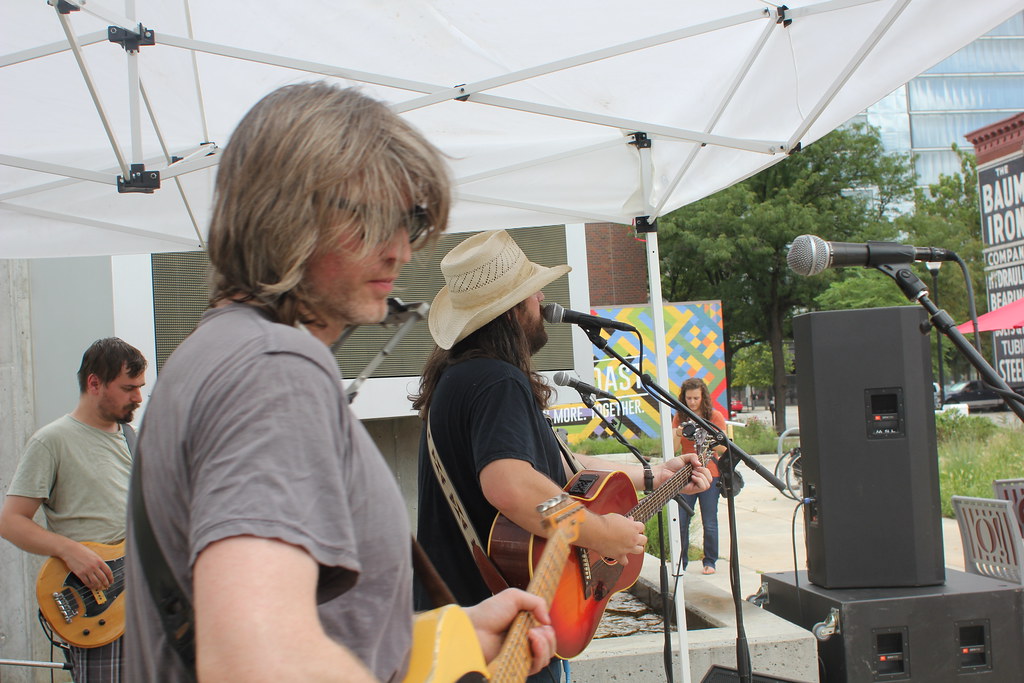 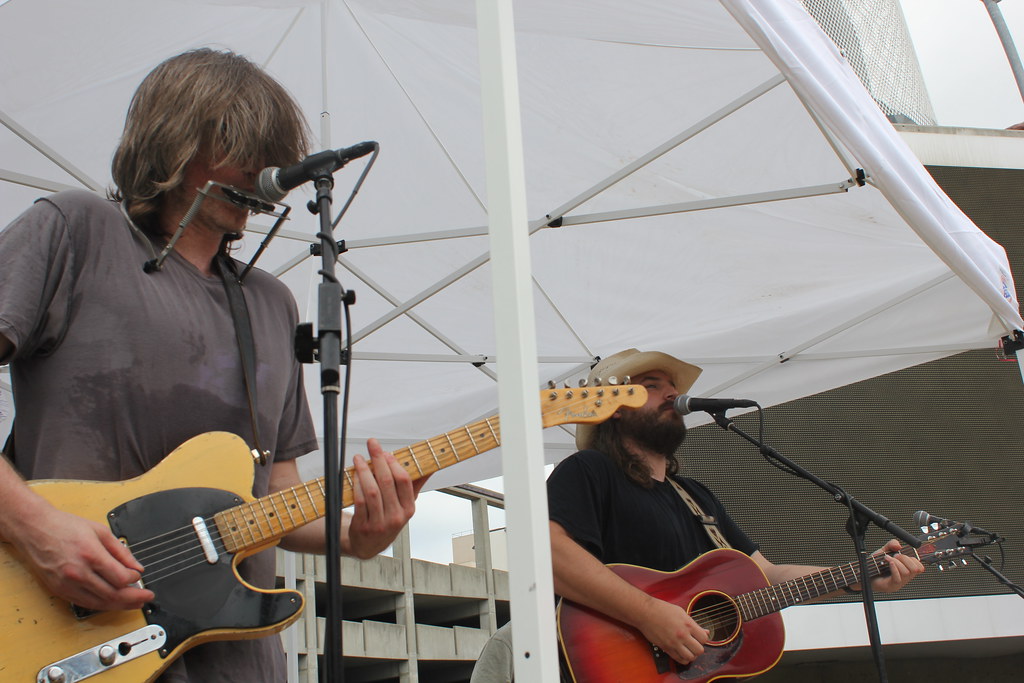 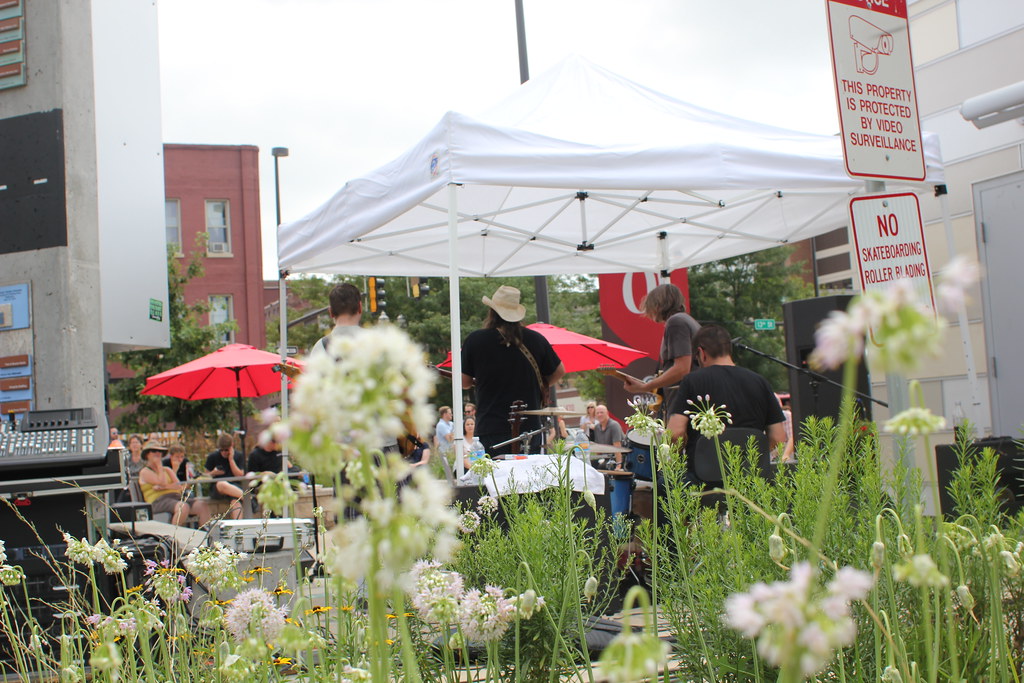 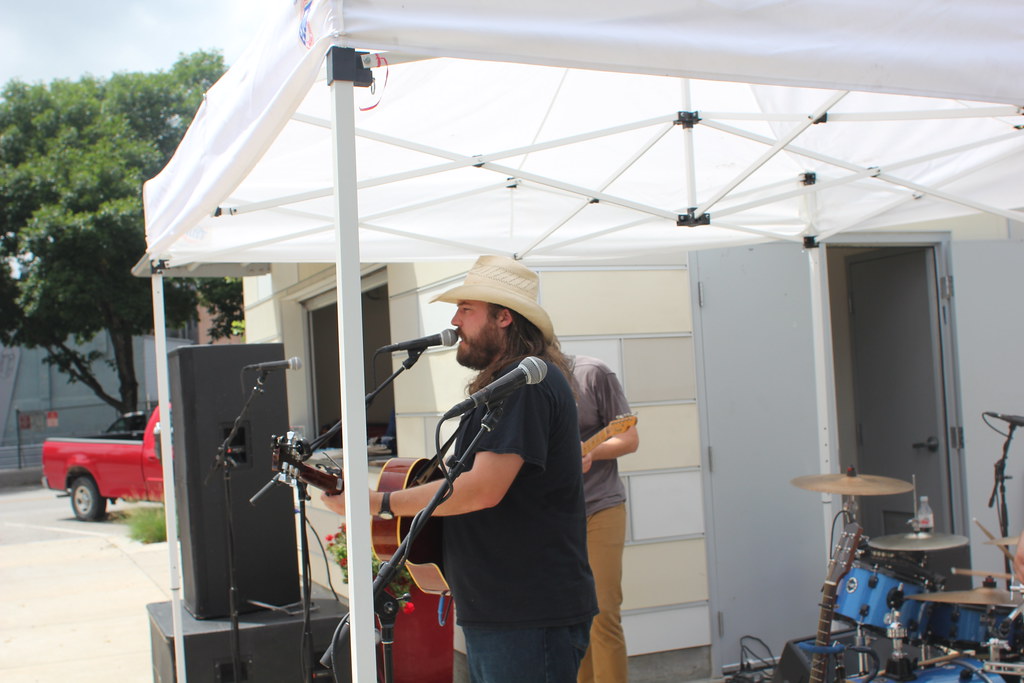 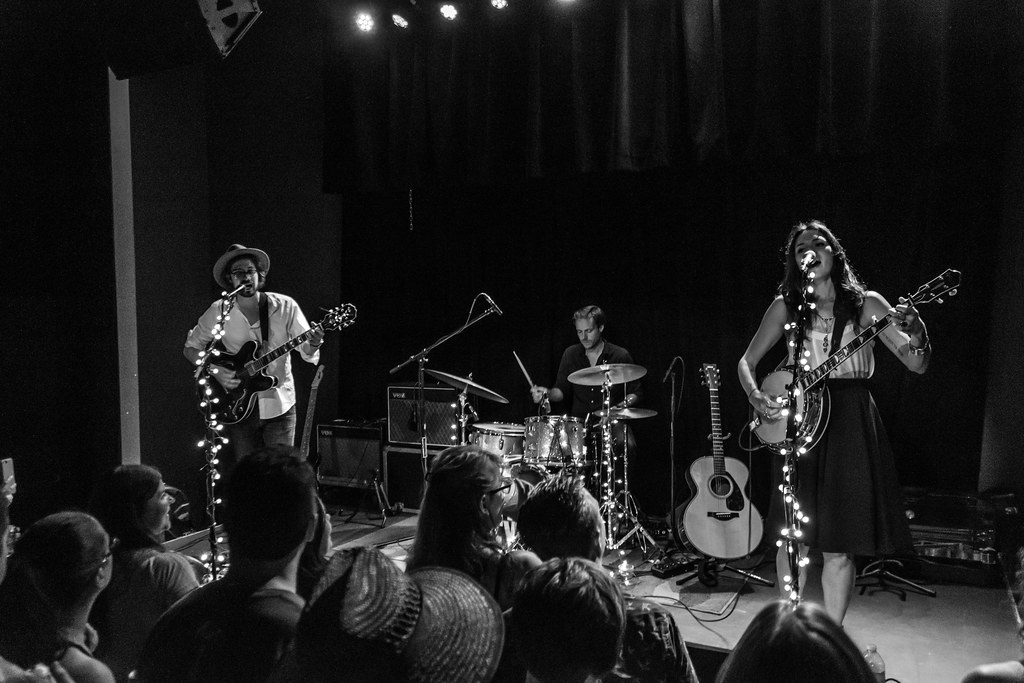 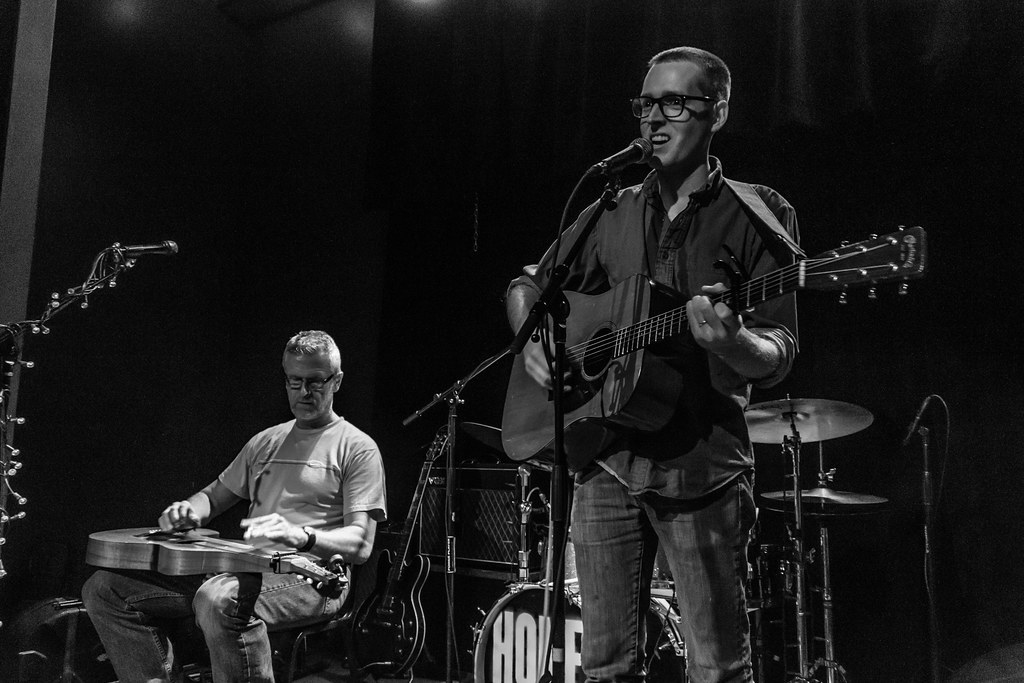 Hear “Nothing” below, and see Waking The Neighbors live at Reverb Lounge Thursday, July 30 (RSVP here).

This weekend is packed with shows, so lets get to a few of the highlights.

As we’re sure you know by now, the Good Living Tour kicks off today in Imperial. Watch today and all weekend for feature stories from Imperial, Ogallala and Scottsbluff. They’ll continue each day throughout the week of tour. See the quick weekend roundup below, and if you’re in town, come out and see some great Nebraska music (and say hello to us at the merch table).

Tonight, Omaha rock quartet Uh Oh releases their EP In The Glow at The New BLK with Eric In Outerspace and The Derby Birds. Read our review of the charming, hard-punching In The Glow here and RSVP to the show here.

Chicago neo-soul hip-hop outfit Sidewalk Chalk returns to Lincoln tonight, and will play the Duffy’s Tavern Boulevard Concert series with AZP in what promises to be a high-energy show. Entry is $10, RSVP here.

Sweatfest kicks off at 1 p.m. tomorrow, featuring performances by Universe Contest, Gordon, Calm Fur, See Through Dresses and a host of others. There will also be spaghetti wrestling and art by Mike Bauer. Entry is $10, RSVP here (and maybe bring an extra shirt).

Session two of Omaha Girls Rock draws to a close today, and as per custom, campers will play a showcase tomorrow night at Slowdown to display what they’ve learned. Entry is free with a suggested donation. RSVP here.

Lincoln pop-punk band No Tide celebrates the June 30 release of their debut LP Death Of The Sun tomorrow night at Knickerbockers with a two-show night. At 6 p.m., they play an all-ages show with Take This To Heart Records mates Sundressed and Lincoln’s Down In Circles. At 9 p.m., Lincoln punks Letterbomb and Omaha’s A Summer Better Than Yours join Sundressed and No Tide for an 18+ show.

Earlier in the day, we published a feature interview with the hard-touring quartet about working with a supportive label, the energy-sapping process of making an LP and touring hard enough to build a fanbase. Read that story here, and RSVP to both shows here.

For a full listing of this weekend’s show, check out our statewide events calendar at hearnebraska.org/events. If you do not see your show or one you plan to attend, email us at news@hearnebraska.org, or feel free to add it yourself using the Contribute button at the top of our homepage. See you out in Greater Nebraska.