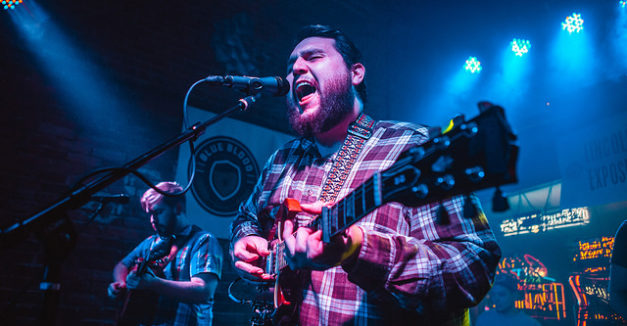 The past couple of years have been transitional for Lincoln dream pop band blét. After summer 2015 release Borrowed From The Breeze, the then-trio sank back into the writing process, generating new tunes for an inevitable follow-up. The guys — Joe Kozal, Cole Keeton and Spencer McCoy — debut the first taste of those efforts, “Lifeguard,” live on Hear Nebraska FM nearly 21 months ago. It possessed many of the band’s elements: nimbly-picked chords, building rhythms and vibrato vocals that delivered the story of a tense friendship.

“When we heard what the song had become with his addition, we all knew we could use that dynamic to explore new directions in our sound,” Keeton says. “When you bring another person into a band that has such a close musical awareness to one another, you build a new level of trust that allows you to push further and explore new sounds and write different songs.”

Blét will put those songs to tape this October when it heads into the studio to record its sophomore full-length record, the band announced earlier this week. Kozal says they have placed a stronger emphasis on song structure and how it can elevate what they are trying to say. Borrowed From the Breeze was sprawling and loose, its songs taking a deliberate and patient pace to find their grooves. In live performances with Durrant, the direction is more focused and tight while maintaining the imagination and resourcefulness demanded of blét’s prior form.

Before they head to Iowa City’s Flat Black Studios this fall, blét plays one last show, Friday at Tower Square. Kozal and Keeton exchanged emails with HN, getting into the band’s new direction, Durrant’s addition and the whackest thing that’s happened on tour. Read their conversation below.

Hear Nebraska: Last time we talked blét for the website, you had premiered a new single, “Lifeguard,” live on-air at HN FM. You recently announced a brand new record, so of course I wanted to start there. How much is that song a preview of what’s to come?

Joe Kozal: “Lifeguard” is the oldest of the songs that are gonna be on the new record, and I think that song opened the door to a lot of new areas. Sonically, it sets a groove (especially now with Alex on drums) like we never hit before. It also helped us find some new ways to contrast acoustic, fingerpicking guitar work with some really rhythmic and percussive lead guitar. Thematically, a lot of these songs became about exploring the relationships with our past(s), be it places we used to live or people we used to know. There’s a certain sense of reckoning in “Lifeguard” that I think manifests itself in different ways and on different topics throughout.

HN: In the meantime, you’ve added a dedicated drummer in Alex Durrant. For the rest of you, how does it feel to devote all of your limbs to one instrument at a time? More seriously, how has his addition affected live performance and songwriting?

Cole Keeton: Alex has become an invaluable addition to our sound and continues to open more doors for us [musically] than we were used to. Earlier you asked about “Lifeguard,” which was the first existing blét song in our rotation that we asked him to write a part for. When we heard what the song had become with his addition, we all knew we could use that dynamic to explore new directions in our sound. When you bring another person into a band that has such a close musical awareness to one another, you build a new level of trust that allows you to push further and explore new sounds and write different songs.

HN: It has been more than two years since Borrowed From The Breeze. What are you hoping to accomplish with this new project? What, if anything, do you feel has changed about blét’s approach?

JK: There’s definitely been a concerted effort to pay attention to “Songwriting” with a capital “S,” if you will. We’ve worked hard to make songs feel more whole and focused on single ideas/experiences/themes. With that, there’s been a lot more emphasis on song structure, and using that to give greater lyrical impact to our music.

CK: “Borrowed from the Breeze” was a lot about finding our sound with a pretty precise format. The sparse percussion and multi-tasking in the Borrowed songs provided a control for us to harness a certain sound. Now that we’ve built upon that arrangement I think we are able to push the aspects of that sound we liked and build them into a new formula. Our approach to organizing songs has changed.

HN: The band has toured and played out of state in recent months. What’s the funniest/whackest story you have from those trips?

JK: I would say the whackest thing to ever happen on the road (perhaps in any context of performing) is when a grumpy old lady in Wichita was terribly offended at our mention of selling t-shirts. There were maybe ten people at this show, it was a Wednesday at the end of tour, and you do the typical “Hey we got shit for sale if you want some,” and she screams “Already got enough band shirts.” and walks right out of the bar.

HN: blét has played Hear Lincoln once before, when it was at Noon. What are you expecting differently this time around? If you could redesign Tower Square, how would you do it?

JK: Can’t wait for those cooler temperatures. Those noon-hour July shows could get pretty brutal. Quite honestly, I’m thankful Lincoln has a cool space like Tower Square for events. The only thing that could really improve it is making the entire square a Bisonwitches patio. More queso.

We want to draw attention to an album we missed over the summer, by Omaha’s Citizen’s Band.

The instrumental rock outfit dropped its third LP Revelation in July, and everything about it leans into the epic. The seven-song concept album definitely has the feel of a rock opera; prima facie, it’s ocean-and-the-heavens cover and abstract song titles set the mood.

The lead track, “Allegro Con Impeto,” enters with a storm and a meandering saxophone solo that takes us immediately to the meat of the album in “The Creeps,” a track which takes cues from the likes of Chicago and Rush. In the ensuing half-hour, Revelation delivers on its own tall order, guiding the listener on a sonic journey through arena rock, calypso, funk and progressive jam rock.

It looks like it will be a beautiful weekend on the Great Plains. Enjoy it, then get out for some shows. Picks are below, with many more at our statewide events calendar here. Tell us where you’re headed in the comments or upload them yourself using the contribute feature here.

O’Leaver’s Fest – The Club hosts three straight days of music for its annual blowout. Peep the schedule below. Shows are 9 p.m. 21-plus, $7, except for Sunday, which is free. RSVP here.

Hear Lincoln at Tower Square – We covered it above, but blét and Jens Lehman & the Time Cops are playing a free show at 5 p.m. at Tower Square. Come say hello, perhaps even with an adult beverage at the nearby sandwich shop. RSVP here.

The Bottle Tops at Zoo Bar – The Lincoln Americana outfit plays the F-A-C at Lincoln’s home of the blues. 5-8 p.m., $5 cover. (We suggest making a date of the two.) RSVP here.

The Way Out album release show at The Bay – The Ashland/Lincoln four piece indie rock band celebrates the release of its debut LP Automatic Writing tomorrow night at The Bay. The album is available now, pre-released by the band earlier this week. The Way Out played some of that record for Hear Nebraska FM when they stopped by in July; listen here. Doors at 6 p.m., music at 7 p.m. All-ages, $5, RSVP here.

Hurricane Harvey benefit at The Bourbon – 10 local acts perform to raise money and supplies to assist with the Hurricane Harvey relief effort. All proceeds will be donated to the Houston Food Bank, The Coastal Bend Disaster Recovery Group and the Houston SPCA. There will be tons of raffle prizes from various local businesses. Find a complete listing and RSVP to the all-ages, 5 p.m. show here.

Solidarity Forever: DSA Benefit at 1867 Bar – Jack Hotel, The Morbs and Root Marm Chicken Farm Jug Band play this night of solidarity and benefit show for the Lincoln Democratic Socialists of America. Entry is free, while donations will be accepted at the door; 50-percent benefits Lincoln DSA, while the other half will be donated to disaster relief funds. RSVP here.