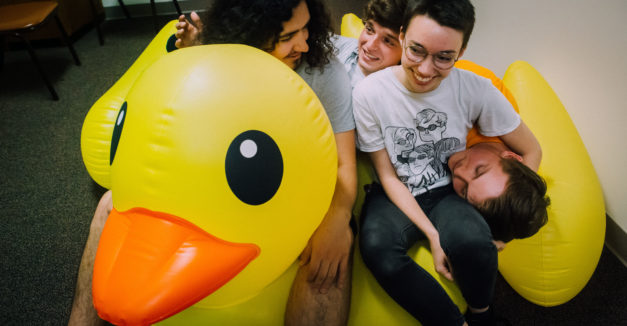 [The following introduction was read on-air at the KZUM studio, immediately preceding The Way Out’s live performance and interview.]

The Way Out has caught the attention of many since arriving onto the scene early last year with debut EP Good Grief. That record displayed a lot for the relatively young yet already seemingly plugged-in band. These songs weren’t only ambitious in their energy, construction and potential; Mari Crisler’s clever, cohesive charting of teenage love from start to anthemic finish suggested an already wizened songwriter ready to take on everything from boredom to heartbreak.

What started with Crisler and Levi Hagen playing mid-90s rock covers as a way to blow off their suburbia-fueled steam has recently blossomed into one of the most talented up-and-coming rock vehicles in the state. Their chemistry — bolstered by the addition of Reed Tiwald and Nick Ulrich — is apparent throughout Good Grief. Merging contemporary indie rock and classic pop-punk, the quartet navigates myriad tempo changes on the strength of its dynamic rhythm section, sparkplug guitar leads and low-end harmonies that made for a smart, spunky debut effort.

What’s impressive about all this is not their age, or their newness, but the quality and craft of the songs themselves and their live performance. The foursome brings the same zip and pop in-person, appearing right at home March’s House Fest or club, as with last year’s Lincoln Calling. It’s pointless to list instrumental duties, as who-plays-what rotates seamlessly from song to song, giving a fun and fluid vibe to songs bursting with vulnerability.

It’s early, but at current trajectory, the future looks bright. What’s in store? Tonight, the band treats us to some brand new tracks, and later, has some big news. You’ll have to stick around for the interview.

Until then, buckle up: here’s The Way Out with “Automatic Writing.”