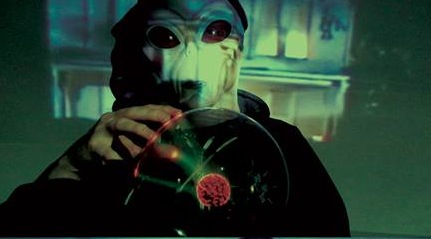 Omaha producer Haunted Gauntlet has breathed life into the frankenstein that is his new mixtape.

Spew Me is limited to 100 cassettes, which will be available at two weekend shows. First, Haunted Gauntlet performs at O’Leaver’s tomorrow night with Dojorok, Kethro, W.E.R.D. and Conny Franko (RSVP here). Saturday, Haug has curated “Spew Fest” at Vaudeville Mews in Des Moines. Joining him on the bill are The Vahnevants, Goldblums, Anna G. of Annalibera and DJ Dj Tanner. It promises to be visually stimulating, and like many of this weekend’s events, there will be a costume contest (RSVP here).

In case you missed it, Haug was featured on Des Moines-based Pants OFF Podcast, in which he talked to host Brian Campos about both upcoming shows in addition to his passion for combining audio and visual art. Listen below:

While one of Omaha’s newest singer songwriters might also be one of it’s most prolific, 15-year-old Jack McLaughlin is definitely one of the city’s youngest.

McLaughlin releases full-length album Lost In The City Saturday. The album was recorded live in three hours with his brother at Rainbow Recording Studio. This marks his second album, the follow up to 2014 EP From The Attic.

When McLaughlin was 10, he broke his jaw fielding baseballs at TD Ameritrade’s first home run derby in 2010. He turned to music as a way to coping with the loss of his first love. Soon, music would become his passion.

McLaughlin says he’s written more than 100 songs, many in the classic folk singer/songwriter tradition. Earlier this week, he was on KMTV’s Morning Blend to talk about his music background and play a few songs. See that video here.

Find From The Attic via Spotify, iTunes and Bandcamp.

There are so many shows this weekend that our brains are frying from the stress. Don those costumes and paint those faces, here’s the rundown:

Meadowlark Coffee: Tiny Giant Launch Party w/ Phoebe Dro, Leaves Brown, Teapot – Lincoln emcee and producer Phoebe Huxleigh launches her web-based independent art collective, as well as a few EPs, with a show at Meadowlark Coffee. Read our interview with Huxleigh on her new label here. Artist Amber Stevens will do live art throughout the show, Funtastic Faces will paint faces and HN contributor James Dean will run a photo booth. This one starts at 7:30 p.m. and wraps at 10 p.m. RSVP here.

Chez Hay: Shithook Album Re-release with A Ferocious Jungle Cat, the Bottle Tops – Shithook has cranked out the live karaoke entertainment at Duffy’s Tavern for more than 20 years. In case you didn’t also know, they used to write original music. Sower Records is re-releasing the Lincoln rock band’s 1997 album When A Boyscout Gets The Blues. Frontman Phil Shoemaker told HN that the band has special costumes planned. Oh boy. Read more of our feature on Shithook here. RSVP to the show here.

House of Loom: the Fantastic Iconoclastic Halloween – This year’s House of Loom Halloween party honors “the matriarch diva of them all, Grace Jones.” Costume contest categories include “Most Iconoclastic/Fashion-crazy,” “Best Celebrity Look-Alike” and “Best Classic Halloween.” I suppose my best bet is Josh Groban. RSVP here.

Halloween activities abound, so check out our statewide calendar here for a more complete listing. Let us know what we missed, or send story ideas and news tips to news@hearnebraska.org. Be safe this weekend and enjoy the shows.