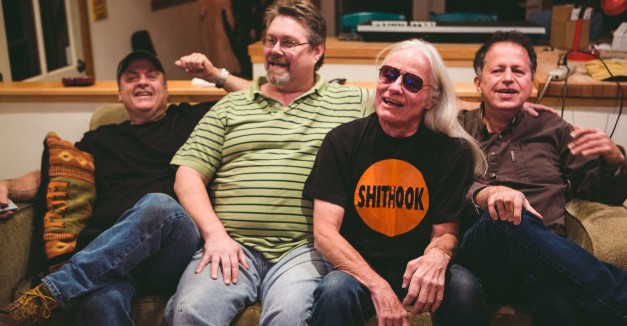 Everyone knows Shithook, but mostly as the karaoke legend of Duffy’s Tavern Thursday nights.

While sifting through the muck at a garage sale last year, Sower Records co-founder Mike Semrad stumbled upon a copy of the band’s only original record, When A Boyscout Gets The Blues, and it soon made it into his regular car-stereo rotation.

“It not only encompasses all of the layers and elements of a good rock record, but production-wise, it … really blew me away,” Semrad says.

Then, at last year’s Folk & Roots Festival, Semrad bumped into frontman Phil Shoemaker and Semrad pitched the idea. Shoemaker not only balked, he facetiously told Semrad “Oh fuck off! Why would you wanna do that?”

Even so, Shoemaker soon came around, and the party was on.

Shithook will re-release When A Boyscout Gets The Blues Saturday on Sower Records. Original guitarist Steve Lamphere will join the trio of Shoemaker, bassist David Boye and drummer Dave Robel for the accompanying Halloween concert, which takes place at 9 p.m. at Chez Hay with the Bottle Tops and A Ferocious Jungle Cat (RSVP here).

Whether you’re an avid karaoke singer knocking “Gimmie Three Steps” out of the park or just dropping into Duffy’s Tavern for a pick-me-up, you’ve seen Shithook kicking out classic rock tunes almost every Thursday night for the last 20 years. It’s practically a downtown Lincoln institution.

Look past the beer-swilling, off-tune veneer of rotating vocalists both talented and woeful, and see one of the longest running original rock bands in Nebraska. Karaoke might be the band’s legacy, but its 1997 album is the Shithook relic that few in the younger guard know about.

“When [karaoke singers] are on stage with Shithook, singing “Dancing Queen,” do they realize that at one point, this band opened for the Ramones or the Talking Heads?” asks Semrad. “I bet people don’t.”

An early Nebraska DIY act, Shithook recorded the album independently in Shoemaker’s basement in 1997. It sold roughly 500 copies and earned a modicum of press attention, taking the band to the Memphis Crossroads Festival (“What you go to if you can’t get into SXSW,” Shoemaker quips).

“At one point in our existence, we were a real rock band, striving for some kind of acceptance or success,” Shoemaker says.

It would never come. What remains is a semi-regular early Thursday night gig at Zoo Bar, the night cap at Duffy’s Tavern and a load of great memories. Shoemaker says the record doesn’t feel 18 years old, even if the band hasn’t listened to it for just as long.

When A Boyscout Gets The Blues combines heavy rock riffs, searing leads and a rumbling rhythm section — all of the identifiable influences and components and even pastiches and parodies of its contemporaries. If the title track seems to poke fun at a whiny would-be rocker, “Deuces Jacks Man With The Axe” outright satirizes Mötorhead’s “Ace of Spades” from the steam train, scale-descending guitar line to the gambling language.

In many ways, When A Boyscout Gets The Blues is an ode to Nebraska music history, born out of the band’s days backing Nebraska Music Hall of Famer Charlie Burton. After spending more than a decade backing the legendary funny-man, Shoemaker calls his style an inspiration. When Burton ended his run and left the band on its own, Shoemaker stepped into the frontman role. His style came naturally.

“When writing lyrics, there’s always gotta be humor there for me,” Shoemaker says. “I was in a band with one of the greatest funny lyrics writers of all time.”

“I never get tired of having people tell me they like the songs we came up with,” Shoemaker says. “We’re still a real band in a way that … we can play this material and we can entertain. We enjoy it.”