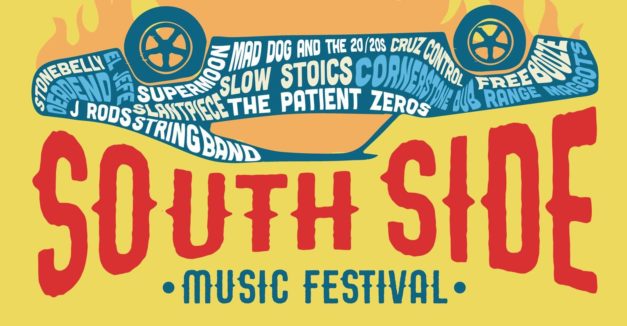 Kearney’s independent and underground music hub is launching its very own music festival.

Gillie’s Bar has announced the inaugural Southside Music Festival will take place Saturday, Nov. 11 on two stages, indoor and in its back alley. In all, it will feature 15 bands, food, vendors and art starting at Noon and running until 1 a.m.

After re-opening as a music venue in 2013 and serving the local and touring music community, this is Gillie’s first run at its own full-fledged fest. It’s a natural progression for a venue that has since been beloved by musicians and fans for its casual atmosphere and consistent quality booking.

Halloween approaches, which has come to mean a new, spooky offering from M34n Str33t’s Haunted Gauntlet.

The Omaha producer — Adam Haug — has released, Blessed Possession, a 21-minute, single-serving track in the spirit of the season. Using a Plantron Pm-88 keyboard he found in the junk bin, he built layers on layers of original music, kicking his signature classic sound uptempo and mixed with a new shade of retro feel.

Equally as interesting as the work, available now on Bandcamp and YouTube, is its release on VHS tape. It can be had online or on Friday, Oct 27, when Haunted Gauntlet, Glow in the Dark and Ryan de la Garza-led comedy troupe You Had To Be There will perform at O’Leaver’s for Spewfest 3.

View the visual Blessed Possession below and RSVP to Spewfest 3 here.

We have a pair of quick updates on Nebraska-related kickstarter projects.

First up, The Show Is The Rainbow, Lincoln ex-pat Darren Keen’s electronic project, is back with new music since 2011’s Tickled Pink. Two recently released tracks “Aw Nuts” and “Three Toed Paw” comprise the first listen from what will be Keen’s fifth album Aw Nuts.

Keen’s associated Kickstarter project — which represents an about-face from his earlier anti-crowdfund stance —  lives here until Friday, Oct. 27. Listen to the new tracks below.

Second, filmmaker Martin Kenna looks to visualize a new Jake Bellows track with a crowdfunded project of his own. According to the Indiegogo project, “Tattoo” will narratively explore a story of two young people in love. Kenna says it will look much like his last video with Bellows, “Little Bird,” which we premiered earlier this year.

Donors have one day left to contribute. Do so here.

Take a look at what’s going on in shows the next couple of nights with our statewide calendar here and find a few picks below. Tell us where you’re headed in the comments or email us with shows, news and story ideas at news@hearnebraska.org.

The Ghost of Paul Revere with Andrea von Kampen at Reverb Lounge – This “holler folk” band hearkens back to old New England folkways and communal music traditions. It’s rollicking sound and lush harmonies earned it top new artist honors at the Newport Folk Festival and made them one of the top acts in the region. Its new album Monarch drops Friday, Oct. 27. Andrea von Kampen opens the show. 8 p.m. show, $10, RSVP here.

Bass Night at The Bourbon – Head down to The Bourbon for a heavy night of dance music from Darkwood, Odinson and RVGER. 9 p.m., 18-plus, $5 admission (+$2 for minors). RSVP here.