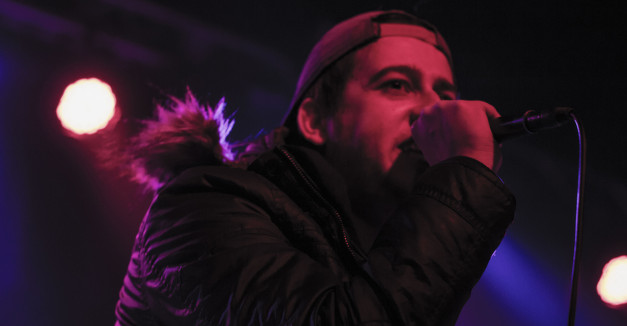 Consider this your epilepsy warning. Purveyors of the Conscious Sound‘s latest — like a Kanye West video or strobed-out Pretty Lights show —is a hip-hop track with a bit of EDM flair.

Jake Dawson, Liz Graham, Nick Holder sing and rhyme while kaleidoscopic projected images of flaming cash, grass, inkjets and busy, wild patterns are cast over and behind them. Words from lyrics spit by Dawson and Holder fill the screen as the emcees whizz by them, only making their already firm and furious delivery hit harder.

The video, directed by Andy Boonstra (the crew’s beatmaker) and Brett Brooner, is a far more visually arresting video than what the group has done in the past, even from a hip-hop group that loves its videos. The Omaha crew has cooked breakfast on camera and doused each other in ketchup in another, and though “Supernova Stature,” is complete with fire breathers and eerie lighting, “Neon” is just as live.

If the “Neon” video s indicative of anything, PCS’ upcoming show at the first annual Grassroots Festival in Council Bluffs could be just as energy-packed. PCS is slated to share the stage with The Wailers and 311, who will be closing the festival by playing their sophomore release, Grassroots, in it’s entirety. You can grab tickets here.