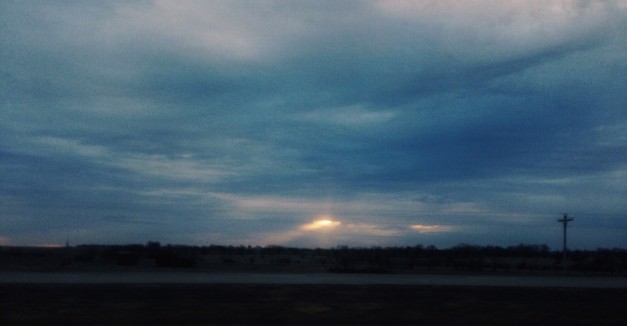 Two miles north of the Oklahoma-Kansas border, we slip underneath an I-35 bridge that’s labeled in white paint, Bridge No. 1049. Its numbering is a parallel emptiness (meaninglessness, if you prefer) to the land around.

Whatever person or agency labels such a bridge — with no indication of where Bridge No. 1 stands — has the hots for a certain kind of futility. Or maybe they’ve never driven the road themselves. A few hundred yards off the interstate, sheds and barns having crossed some mortality line in their ongoing battle with wind and rain. They’re punch-drunk.

By the time we come back up this road on Sunday, South by Southwest may grant us their same posture.

We’re listening to Okkervil River. Will Sheff’s driving songs, his both droopy and brutal voice, are fundamentally aware of themselves. And it makes for a nice soundtrack to the open road, but also for the gratuitousness of the music and marketing festival we approach.

Like most spectacles in this country, perhaps its enduring spatial quality is that you still have to trek (or more likely, sit on your ass) through geographic vacancy to arrive.

I’m Chance, and by this point, the big Kansas plains make me want to feel sure about that. That McDonald’s coffee earlier could have better. There, that’s something a person would say. Next to me is Jacob, Hear Nebraska’s staff writer. He’s driving my car and he is doing a good job. It’s comforting.

“It’s fucking flat,” he says of the windshield vista that almost forces you to see it in 180 degrees.

HN contributing photographer Andrew Dickinson is in the backseat. He’s taking a lot of photos through the car windows and of our dusty biodome inside the car. Which makes me think, as I often do when I’m with him, that I’m missing things.

Anyway, we’re in the fifth hour of an almost 13-hour drive. Since Jacob and I write and talk about Nebraska music for a living, the conversations that follow come naturally.

Before we begin talking, Johnny Cash is doing “Sam Hall” on the stereo.

What’s the weirdest or most out-of-character album Saddle Creek has ever released?

Jacob: Tokyo Police Club. That’s the band that doesn’t fit in at all with any of the bands that have been on their roster. Especially when it came out. Now, they could probably hang with Twinsmith or something. I don’t think Saddle Creek has ever released anything that sounds this … British [we’re listening to 2008’s Elephant Shell on the stereo now.] Most Saddle Creek stuff has a Midwestern quality to it. This sounds like Bloc Party, sort of.

I remember seeing this song [“In A Cave’] on MTV. During MTV’s death rattle or relevance.

Chance: Just ‘cause of the hair or do you have other reasons?

Andrew: I’m trying to figure out a good one for [Jeremy] Buckley.

Chance: You need to stop casting just Twinsmith. What about Mark Ruffalo as Max [Holmquist]? But would this movie have a narrative? How would you even do that?

Jacob: You could do a Romeo and Juliet thing about two people from Lincoln and Omaha that want to make a band together.

Chance: And their families won’t go to the shows in the other town? [Laughs.]

If Nebraska music was an NBA team, how cool would that be?

Andrew: Wouldn’t the state be upset it’s not an NFL team?

Chance: Hold on, let me draft my starting five. [Matt] Whipkey, Nate Luginbill. I’m taking Zach and Ishma [from AZP] for a Sampson/Olajuwon “twin towers” thing … Did I just take all tall people?

Jacob: You wanna have a good team, don’t you?

Chance: Who would have a good handle? Who’s my point guard? Maybe I want someone kind of odd and wiley, like Casey Hollingsworth [from Bud Heavy and the High Lifes] … or wait, hold on, I want Rachel [Tomlinson Dick] as a wing player. Like a more punk Kyle Korver. “RTD for three!”

Jacob: Conchance at the point!

Can we say something about Twinsmith’s and Icky Blossoms’ potential for their 2015 albums that’s better than “they could be popular”?

Chance: I feel like people are always eager to say “this could be on the radio!” whenever a Nebraska artist writes something that feels aware of pop music and how contemporary music sounds in 2015. But I don’t feel like that’s the best way to talk about stuff like this. Have you heard what’s on Top 40 radio? This is not it.

Chance: But that Twinsmith song that used to be called “John Elway’s First Touchdown Pass” is very catchy.

Jacob: It was called that!? Why did they change it?

Chance: I still need to ask why they did. Maybe Saddle Creek thought it was too obscure? Or else they were worried about Elway being litigious. Because of how he got mad at that punk band from Colorado that called themselves Elway.

Jacob: That’s weird. Damn, John, I thought you were cool … I feel like every year someone is pinning their hopes on someone in Nebraska music and it never works out quite like people predict.

Chance: To be honest, I just don’t think anyone, myself very included, has a clear sense of what will work industry-wise.

Andrew: I think the thing you guys are hopping around is — what does actual success mean? Does it mean being Bright Eyes? Or getting on a label? Or having people come to your shows?

Jacob: I think my definition of success is playing a headlining tour somewhere the size of The Waiting Room and selling it out. Like Shakey Graves. I wouldn’t call him famous, but he came through and sold out The Waiting Room.

Chance: Mmm, so we don’t have an answer. Could you say this? Could you say, isn’t it going as well for those two bands as it possibly could at this moment? Aren’t they right where they should be in terms of position for advancement?

Who are the best people to photograph in Nebraska music?

Andrew: Saber Blazek is first. But also maybe the hardest to get in focus. ‘Cause his head is always flinging around in ways I don’t think my neck can move. 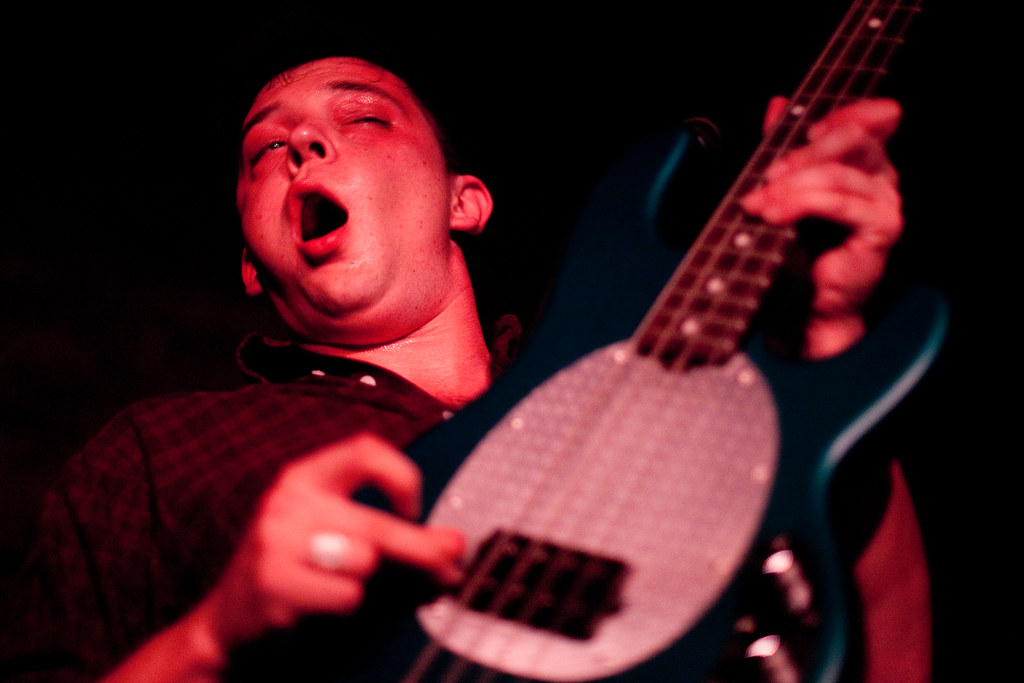 Universe Contest. Probably old more than new, because of the lights.

Jacob: Josh Hoyer, because he’s always doing the preacher thing and reaching his hands out.

Andrew: The backlot at Duffy’s is great to shoot in. It’s rare and not inside a dark bar. It’s still dark. Oh, and Root Marm, especially at house shows. Ian [Egenberger] is always wearing a cool hat and Kyle [Bruggeman] has spit at the bottom of his jug. Add The Bottle Tops, too. … But, also, not the band, the crowd. The people who show up at these shows.

At this point, we answer a remote question that came via text from one-time HN contributor Tim Lundy.

“So obviously the whole Oquoa record is amazing, but how good is ‘Liars/Lies?’”

[Puts it on the stereo.]

Chance: I never think of Max having a really good voice. But he really does. I’m excited to see what Oquoa does going forward. The [self-titled debut] is really a record for people who kind of savor rock music. Like See Through Dresses’ album. Albums by people who love tasteful rock for people who probably love the same thing.

What’s the best example of a Nebraska band not sounding like itself, and that being cool?

Chance: I think we came up with this because of that Digital Leather song Jacob found.

What about Jack Hotel’s “Iodine”?

Did you know there used to be an Omaha band called The Better Beatles?

Chance: That’s it. Jacob, I have a question … what does “the omaha sound” mean? Do you need a drink?

Chance: Can we talk briefly again about Cursive playing “Hunger Strike” at Bowery Ballroom and that video?

Chance: I only want to bring up that Tim Kasher made a joke — that no one seemed to get — about Stone Gossard sounding like a French cheese. It was phenomenal.

Who are the best social media follows in Nebraska music?

Chance: Does he use social media, really?

Jacob: Oh, Vickers is a great Facebook follow, you “crazy motherfuckers. So much fucking hair.” [Because Vickers gets hair from its fans to burn at shows.]

What Nebraska musicians are your parents most into?

Chance: Which is remarkable. Because how many artists pass the I-want-to-groove-out test and the cool-crowd-and-persona test and the let-me-put-on-this-record-and-ponder-it test? Not many.

Jacob: Can we talk about who’s doing the freshest thing in Nebraska music? I just want to say Mesonjixx.

Andrew: I knew you were going to say that.

Jacob: I just feel like it’s such an experimental project in a good way. Still songwriter-driven. And Mary [Lawson] has a real voice. She has shit to say.