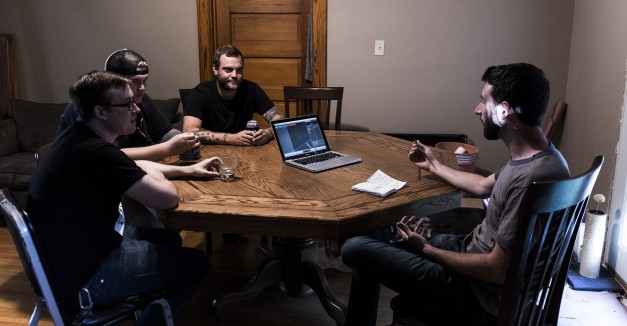 We at Hear Nebraska expend a lot of daily sweat and coffee to cover Nebraska music statewide, but with a small editorial staff, it’s hard to get there alone. We also realize artists don’t always know the best way to approach HN or other news outlets for coverage.

We assembled an easy guide to getting covered, with help from a pair of publicists in Emily Engles of E3 Music Management and Caroline Borolla of Riot Act Media as well as music journalists L Kent Wolgamott, Kevin Coffey, and longtime Lazy-i blogger (and HN board member) Tim McMahan.

Before sending out a press release or contacting a journalist, spend an hour or so getting to know that publication. Read its feature stories, blog posts and album reviews. Watch videos and view photos. The more familiar you can become with the way an outlet operates, what type of content it produces, the better equipped you’ll be to garner its attention.

Borolla — who represents the likes of Big Harp, Orenda Fink and The Faint — recommends an even more tailored approach: “Become familiar with a writer’s style and genre preferences and pitch your record or song to writers that cover similar sounding artists.”

Why are you seeking coverage? Why should we care? While we know that you care dearly about your music, most journalists will tell you there has to be some important event or accomplishment attached to a contact in order to merit coverage.

“If you have a few shows going on and some new music, I’m automatically interested,” says Coffey, music writer for the Omaha World-Herald. Album releases or tour announcements make for great hooks, and there is typically more than one angle to approach it.”

Hear Nebraska writes about original bands and artists who are working — playing shows, releasing new music and booking tours. Because there are far too many Nebraska musicians for our small editorial staff to ever cover cumulatively, we aim to time our coverage around big news — generally, new music releases and tours. We’re always doing legwork to find these stories ourselves, but it’s hugely helpful when a band or publicist gives us advance notice. Not only does it create a better chance of our scheduling a story, but the coverage is more likely to benefit the artist as a promotional tool. I can be reached at news@hearnebraska.org literally all day. Hit me with a news tip or story idea and I’ll see if and where it fits.

In order to help a reporter get to know your project, it’s important to have music, photos and a bio at the ready. Music profile websites like Soundcloud and Bandcamp are easy to use for both band and audience, and are easily linkable/embeddable in online blogs and feature stories. Photos are basically essential, as most media outlets can’t or won’t run a story without one.

Especially early, professional recordings or photos aren’t necessary. “It doesn’t have to be a thousand-dollar studio recording, it can be the demo you made on your laptop,” Coffey says.

Still, it definitely can pay dividends to invest in professional recordings. Aside from documenting your hard work (even for nostalgia’s sake — I’ve got plenty of those) it can be an attention grabber in itself. McMahan says that he hardly has time to listen to all of the Soundcloud and Bandcamp pages out there, so physical copies are a plus.

“If the band sends me a CD in the mail, I’m even more likely to listen to it,” McMahan says. “And if they send me a vinyl copy of their record I feel almost obligated to listen to it and comment.”

Either way, having all the requisite information in one place will make it easy to write a press release or answer interview questions when the time comes. Which leads us to …

Engles — who manages local Omaha acts — listed this first when I asked her to give advice on seeking coverage. Aside from cultivating a relationship with your local or desired press outlet (which we’ll get to), this part is of the utmost importance, as it may be your first and/or only contact.

While style and content of press releases can vary, here are a few tips for getting a journalist’s attention:

Why should we care? “Any journalist, whether you’re writing about music or crime or whatever, you’re writing about news,” Coffey says. This point cannot be overstated: why should people care? While a one-off show rarely merits a feature story, album releases, tours or unique and unexpected stores often do.

Write a catchy headline. This goes in the email subject line, along with some variation of “press release.” There’s no need to be especially clever, but all of the pertinent information must be there, and it must be succinct. If your story is about your debut full-length album release, say exactly that. Journalists are inundated with requests and press releases on a daily basis. The headline must grab the reader and tell them exactly what is going on.

Summarize the news immediately. An article published by the Guardian in June suggests that, while getting a journalist to open an email is important, the first sentence is even more so, as its reader will usually decide immediately whether or not to continue based on its effectiveness. In a typical newspaper story, this is what is called a “lede” or “top line,” and it’s usually the very first sentence. It should contain as many of the five “w’s” as possible. Quite simply, it’s your elevator pitch.

Get to the point. After the lede, use the rest of the email to explain the story and why it’s important. Explain the necessary details: If it’s a new album, say where and when was it recorded and give a preview of what it sounds like. If it’s a tour, include dates, other touring bands and any other pertinent information. It always helps to tell some kind of story, but make it quick and easy to read.

Use correct grammar and spelling. This is an absolute must in order to make communication professional. Proofread the press release multiple times, checking for spelling accuracy and sentence structure. Multiple errors may make the email difficult to read, which may in turn lose the person you’re looking to reach. If you’re unsure of a particular spelling or grammar rule, take the time to run an internet search, or ask a friend. It’s worth the extra effort to get it right.

Wondering how HN can help specifically? Here’s how:

Statewide events calendar — any and all shows go here, from just a regular night to an album release party. Email them to news@hearnebraska.org, or feel free to add them yourself here.

HN Radio — we feature a weekly rotating playlist of all-Nebraska music at the top of our homepage. Send new music for consideration. Also, we host a weekly radio show on KZUM, Monday nights from 8-10 p.m. If it’s on HN Radio (and radio friendly), you can bet I’ll play it there, too.

Daily news — new music, interesting tidbits, regional touring, playing a string of shows or opening for a touring band can land you here. We do a daily show roundup in this space, so there’s always room for promotion.

Album review or song premiere — these often go in news, but also can be stand alone features. Either way, it helps to let us know about new music as far in advance as possible, especially if there is a release show involved.

Feature story or video — almost always associated with some kind of hooky story: regional/national touring, full-length album, label signing or just hustle and an interesting angle. If you think you have a home-run idea use that press release to pitch it!

To a person, everyone surveyed for this article mentioned relationship building as the most important step, outside of playing shows and releasing new music. This could be a handshake at a show or consistent (yet professional) follow ups. If you don’t get covered right away, be persistent. There are plenty of reasons why that might be the case, from timeliness to content volume we face. Coffey cites his loaded email inbox, as well as the variety of determinations he has to make on a daily basis. Lincoln Journal-Star music writer L Kent Wolgamott says he likes to be kept in the loop on band happenings. When the timing is right, the effort put into that relationship gives you an advantage.

If a journalist does write about your band, Borolla recommends showing your appreciation.

“A complement on an article your favorite journalist wrote or follow up note on any coverage for your band can go a very long way,” Borolla says.

(Whether you liked our piece or not, I want to know about it. My inbox is always open at andrews@hearnebraska.org).

This almost goes without saying, as these are the primary functions of any band or musician. To some, though, this is the first and only way for a band to burst out of its inner circle.

“Just like it’s always been, the only way to break through is by touring and live performances,” McMahan says. “No one has time to listen to all the anonymous music being uploaded to Soundcloud/Bandcamp/Youtube.”

Regardless of how a band decides to pursue dissemination of its music, it’s important to remember that the press is simply one tool among many, but a valuable, cost-effective one.

“Receiving a feature story or album review from a media outlet is definitely worth the effort used to gain the exposure,” Engles says. “It can be used to promote the band or album for years.”