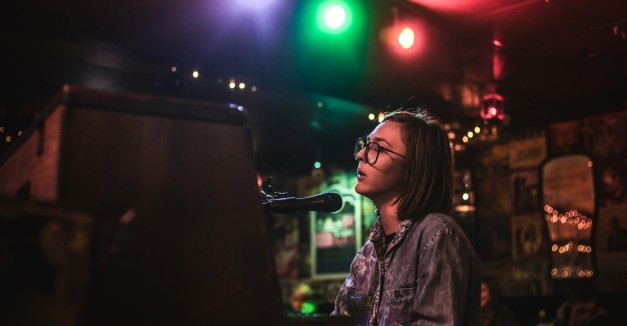 The Omaha songwriter’s drone lends a nervous quality to what would otherwise be wholly bold declarations of love. The absolute devolves into rehearsed line. It’s typically flirty to tell another that they “look so damn good in a pair of jeans”; here, its semi-guarded embarrassment.

There’s a resignation in McClellan’s tone, at the outset of “Let’s Be Quiet.” The character is seemingly aware of its tunnel vision but at least trying to warm up to the idea of spending every waking moment staring into its significant others eyes.

A listener might interpret this as an awkward yet charming love confession were it not for a dramatic swing final act. Before that final passage, McClellan lilts down the scale, crescendoing toward big minor chords before pulling up suddenly into the clouds again. Her voice reemerges, sporting a threatening tone, attempting to ward off logic and the “calculating life.”

The possibility of rejection seems affecting, but the character persists anyway. There’s a desperate hope for simplicity in the quiet. Don’t over-think it, lest the wires come untangled or cut off entirely.

McClellan recently finished recording forthcoming LP Fire Flames with Ben Brodin at ARC Studios. The record will release on tape next month via Majestic Litter, and will include this new track among 10 others.

For now, hear the debut of Anna McClellan’s “Let’s Be Quiet.”