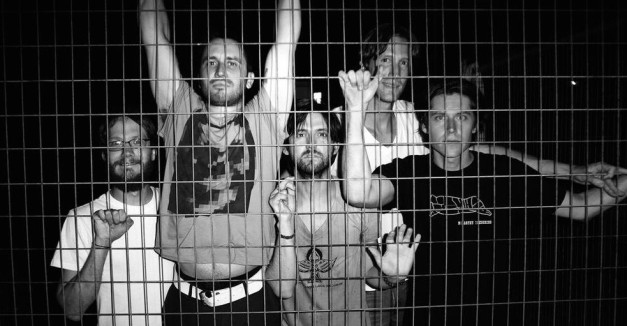 For Desaparecidos fans, it’s been a few years of speculation and piecing bits of information together.

There was the reunion in 2010 and again in 2012, followed by a short tour and a string of singles. Last year there was an Epitaph Records mixtape that included the Omaha-based punk band. In November, the band reconvened to record in its hometown.

And today, finally, there are some concrete details on Desaparecidos’ second album, the follow-up to 2002’s Read Music/Speak Spanish.

This morning, Pitchfork premiered a track from the Conor Oberst-fronted project’s forthcoming Payola, to be released June 23 on Epitaph. Pre-order the record here.

As a new track, “City On The Hill” is less surprising and more refreshing. With Omaha music staples Landon Hedges, Denver Dalley, Ian McElroy and Matt Baum filling out the band’s lineup, Desaparecidos’ sound has always been a fully-formed anti-commercial punk act. And for its songwriters, it has acted as more of a side project than a main vehicle.

There has never been much room or need for intense growth. Desaparecidos is what it is: a high-aiming punk band, a specific kind of outlet for its players.

As always, the rage is palpable and the guitars are robust, colored with Dalley’s high-octave lead-work. Which makes Tim Kasher’s appearance on the track perhaps the most satisfying new information. It’s hard to hear exactly what Kasher’s role is, but we’re guessing backing vocals.

In terms of features, one track also has help from Against Me!’s Laura Jane Grace and another calls in So So Glos.

Desaparecidos has a handful of tour dates this month and later this summer. They’ll be playing with Brand New, Joyce Manor, Built to Spill and Touché Amoré. Check them out:

^ with Built to Spill