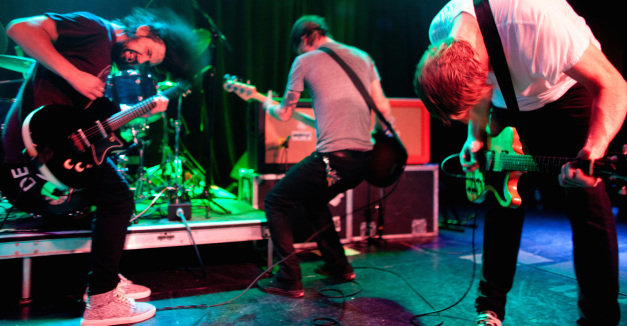 It’s almost a guess what persona Conor Oberst, having released music in so many different contexts, will inhabit for any given performance.

There’s the moody Oberst with the complicated relationship to his hometown fanbase. There’s the chatty and comfortable Oberst and the classic country troubadour, among others.

But last night at The Waiting Room with Desaparecidos, on a bill with Both and Digital Leather, Oberst donned a cap he probably gets to wear all the time on national and international tours, but almost never brings out in Omaha where he achieved demigod status more than 10 years ago.

Last night he was just the rhythm guitarist and vocalist for a band (albeit, a very, very good band), hardly even the frontman standing next to bassist Landon Hedges’ erratic, excited acrobatics.

Something about the landscape and nature of the Desaparecidos ethos creates a backdrop against which Oberst the Immortal Voice of Angsty Omaha Teens can blend in and become Oberst the band member. He was even sporting a beard last night, as if a subtle acknowledgement to his role as everyman guitarist.

Politically potent, it isn’t possible to read your own troubled romance into Desaparecidos songs. Texturally aggressive, there’s no space in the soundscape for Oberst’s bare, vulnerable voice. If you want to find yourself in a singer’s shoes, last night was the wrong show.

It was more like a baggage-free evening for everyone involved, absent of the deeply personal history attached to projects like Bright Eyes. Indeed, most people there under 25 (myself included) probably don’t even remember the release of Desaparecidos’ sole album, 2002’s Read Music/Speak Spanish.

As few and far between as Desaparecidos shows in Omaha are (and with two of the most recent ones at major outdoor events, Maha and Concert for Equality), there was really no choice but to judge and enjoy the night based only on what was presented right in front of you.

Both, the hip-hop duo relatively unknown to many of the hundreds of people keyed into the work of Omaha scene forerunners like Desaparecidos, set that tone. 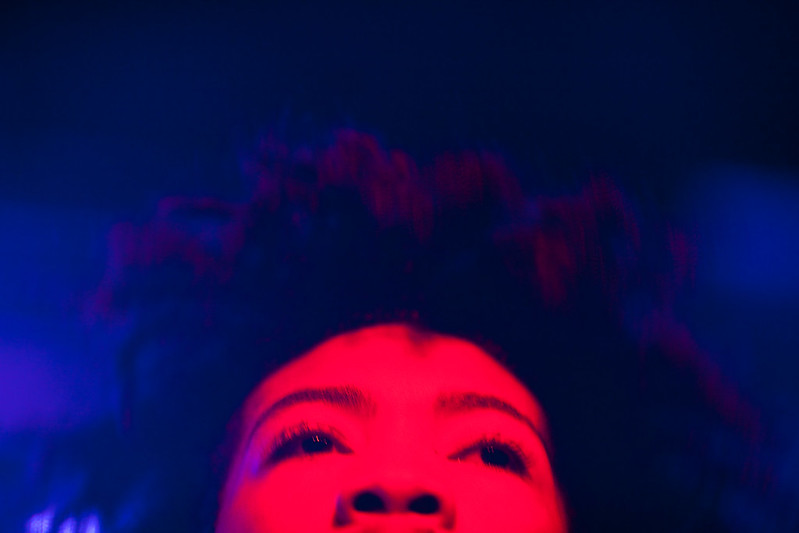 The first lyrics out of emcee Scky Rei’s mouth were “Show me my respect, I earned it,” to the slowly-filling venue. While Scky may have known that he and producer INFNTLP have earned the respect of Omaha’s music community after a solid self-titled full-length and a regional tour with The Seen in the last year, he would have to prove it all over again last night.

Which, by all accounts, he did. Both might be making a name for itself as the wildcard act on any bill, playing shows with everyone from Oquoa to Mean Street. Call them the hip-hop group that hangs with rock bands and you’ll feel validated when you see Scky and INFNTLP at the center of the Desaparecidos mosh pit and again when Oberst pitches the group’s website (bothsucks.com) to his capacity-crowd. 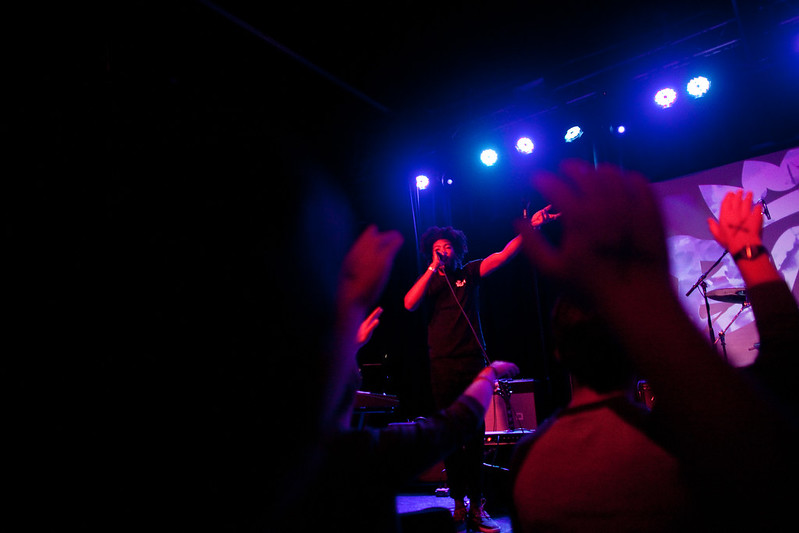 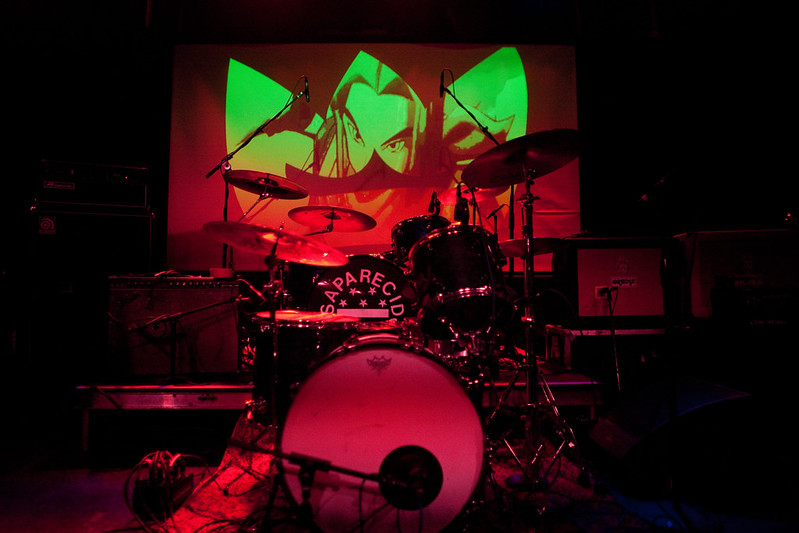 During the set, too, Both’s presence was quickly justified. Either INFNTLP is beefing up production techniques or they’re naturally more palpable on a PA system that lets the low-end spread out. Tracks both new and familiar were approached from a more aggressive angle than the lounge-vibes cultivated on “Uhmmmmm,” for instance.

Scky Rei, energetic and charismatic, gets recursively more excited and intense by his own delivery, even when it took the generally silly group about half the set to get comfortable enough to goof around on stage. The absence of self-seriousness eventually matched the atmosphere set by projections of Dragon Ball and Dragon Ball Z episodes behind them (mostly from the Androids Saga, if you were wondering).

And when they finally did, the set transformed from decent opener to memorable act. 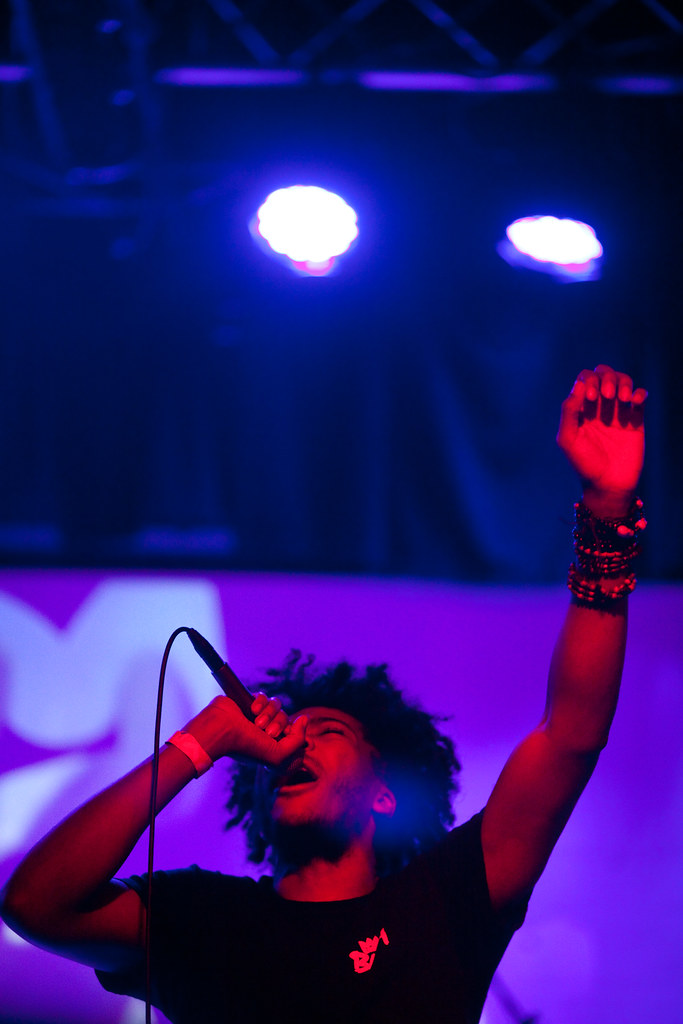 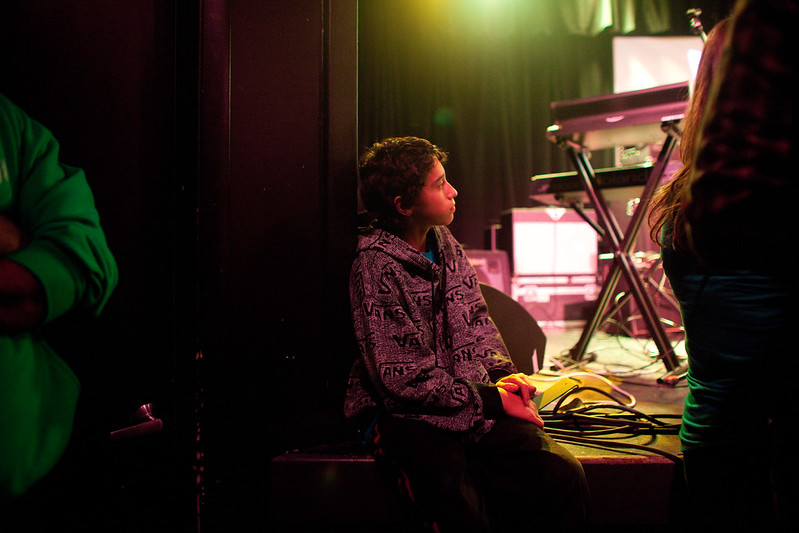 INFNTLP, who generally only speaks through his MIDI controller with myriad explosions and maniacal laughter between tracks, even took to the microphone at one point for a charming, if joking and stumbling, freestyle verse.

It was clear last night that seeing Both on such varied billings isn’t because they’re adaptable, changing to fit the topography of showmates, rather it’s because their energy and identity is so universally engaging.

Digital Leather’s set began full-bore and never really hit the brakes. The five-piece has developed a reputation as one of Nebraska’s most aptly named bands. It’s Joy Division-style punk, relying more heavily on synthesizers than any traditional punk rock instrumentation. Even so, with room in the soundsystem to fill the space, what could have easily been a wall of indecipherable garage noise (and has been before) was a warmly layered array of complex inner workings. 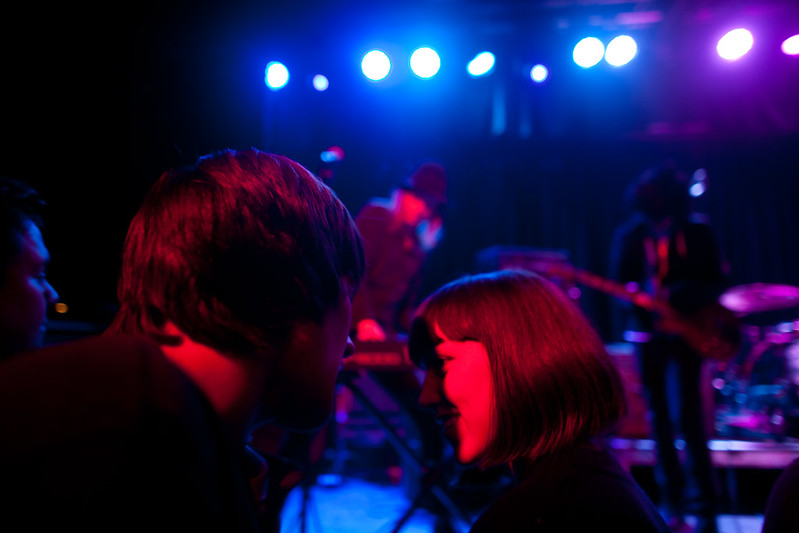 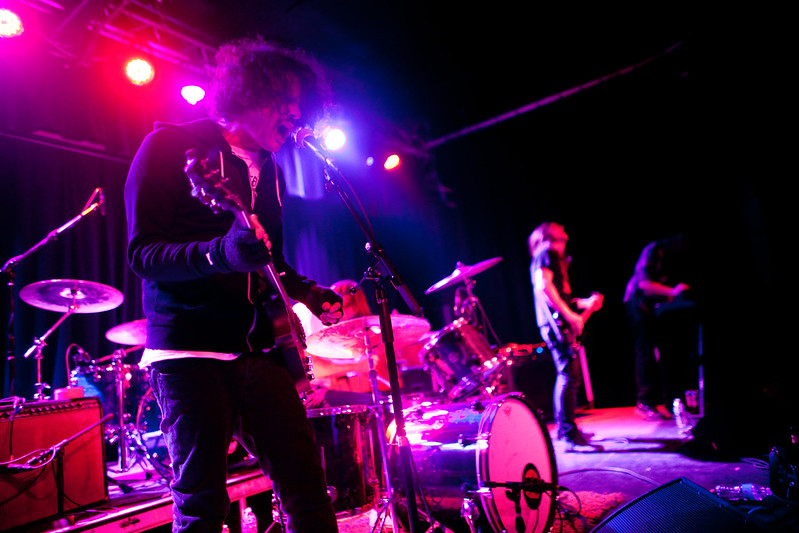 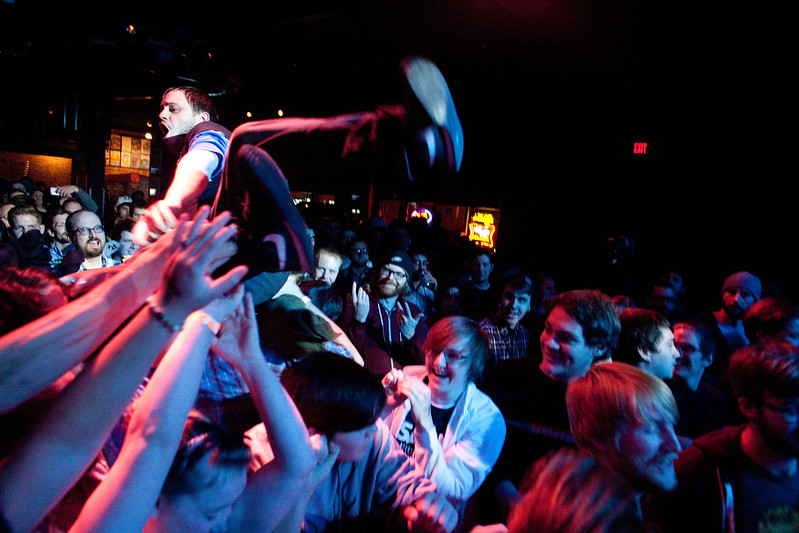 But the crisp live mix may have been the only warm thing about Digital Leather’s cold and calculated approach. Vocalist/guitarist Shawn Foree and synth/vocalist Todd Fink have similar, inhumanly impersonal vocal deliveries that Faint fans will recognize immediately. It suits the almost futro-Soviet sound that never quite invites the listener in.

And to further that arms-length effect, Foree spent most of the set in a curly black mop-of-a-wig, only to remove it near the end to hilariously reveal the exact same natural hair on his head. 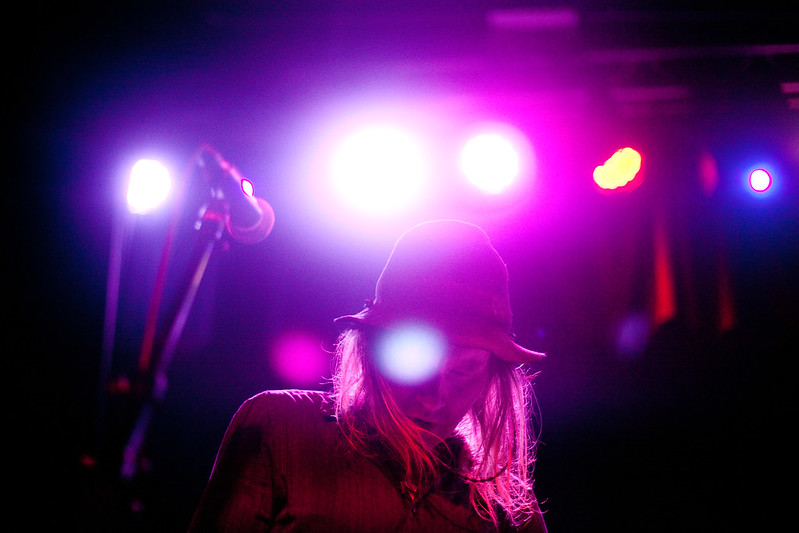 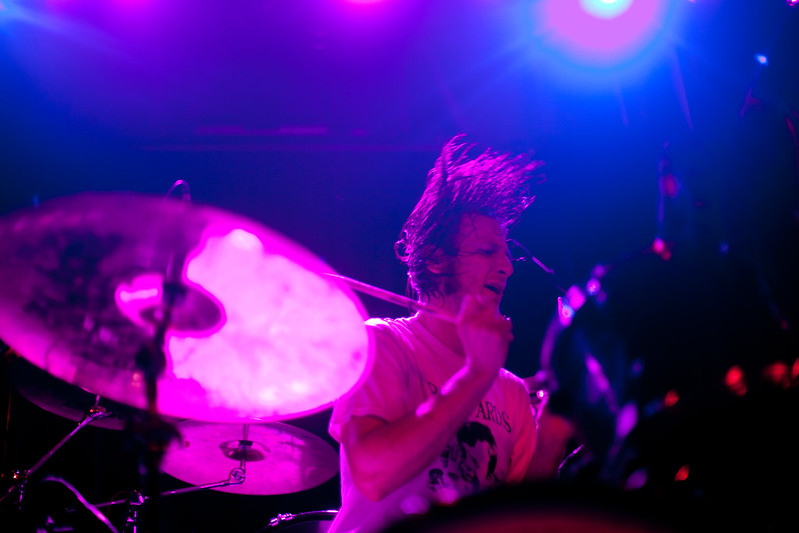 When Digital Leather starts with its foot all the way on the gas, it’s hard to build to a climax. But they did manage, eventually cajoling a generally placid crowd into a few raised fists before Desaparecidos came on.

As for Desaparecidos, they had crowd surfers before the end of the first song.

They tore through almost their entire published catalog (less than 15 songs), as well as tracks presumably from the forthcoming LP, which the quintet was in Omaha to record.

And the new stuff is the same as the old stuff: politically furious, masterfully orchestrated punk. This time around, the guitar work is less informed by the early ‘00s era emo music, but the approach is the same. 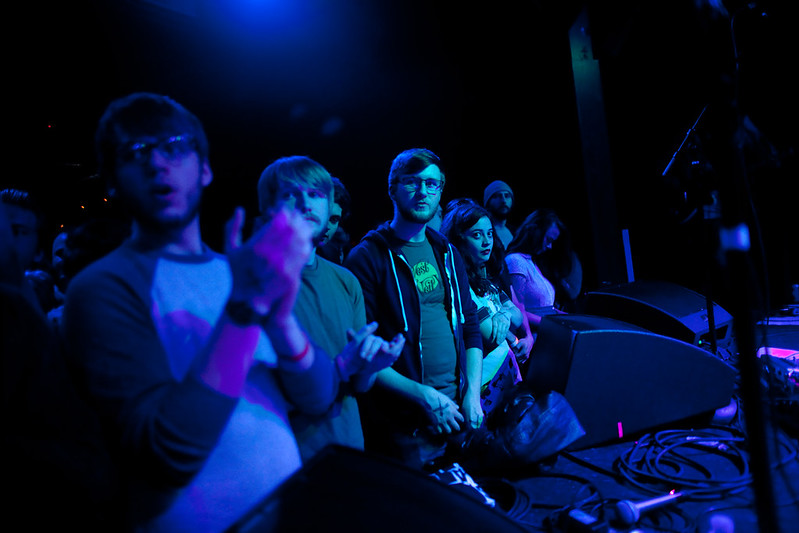 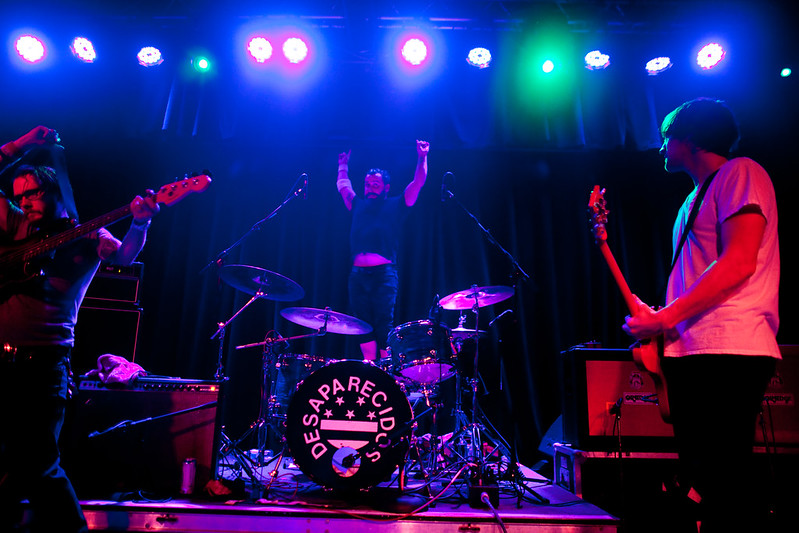 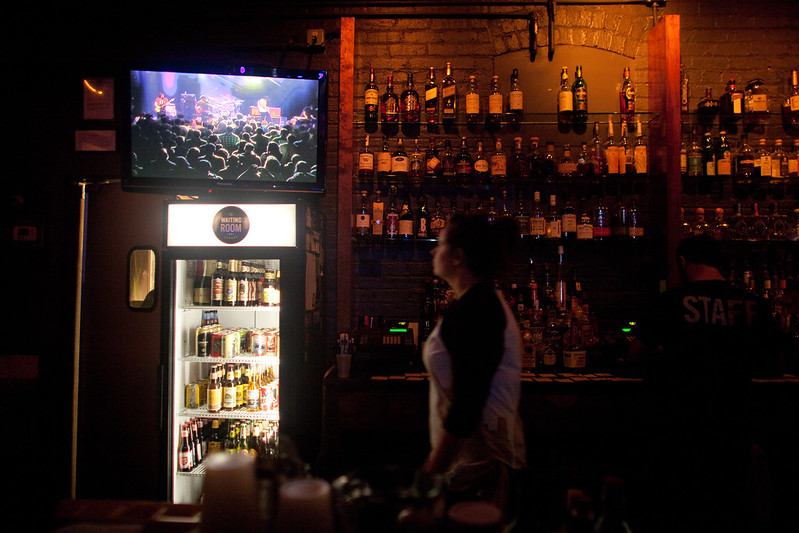 It’s a both amazing and depressing fact, too, that many of the politically edgy songs penned for Read Music/Speak Spanish 12 years ago still hold up so well today. In a perfect world, punk is not timeless because the fears and frustrations it gives stage to are eventually resolved. But when Desaparecidos plays “The Happiest Place on Earth” and Oberst voices a shrugging military enlistee who “got a letter from the army, so I think that I’ll enlist,” it rings as sadly true today.

Two years ago, Desaparecidos released “Marikkkopa” about racist immigration policies in Arizona. Last night, the song was still about that, specifically, but change a few words and it’s equally about the racial tension surrounding Michael Brown and Ferguson, Missouri, a fact Oberst acknowledged.

Indeed, people who were eight years old when “Greater Omaha” was released knew all the words and raised their fists to the anti-capitalist expansion anthem, perhaps ringing even more relevant now to Omaha audiences with the recent demolition of old buildings in Midtown.

After sheer dynamic stage presence, Desaparecidos succeeds best at embodying the little guy’s plight, closing out with “Man and Wife, the Latter (Damaged Goods),” written from a woman’s perspective. Oberst seems adept in the role as someone else’s mouthpiece, equally evidenced on this year’s solo record Upside Down Mountain. And he’s more capable now than he probably was 12 years ago, when the subject matter may have been as personal as a fresh wound. 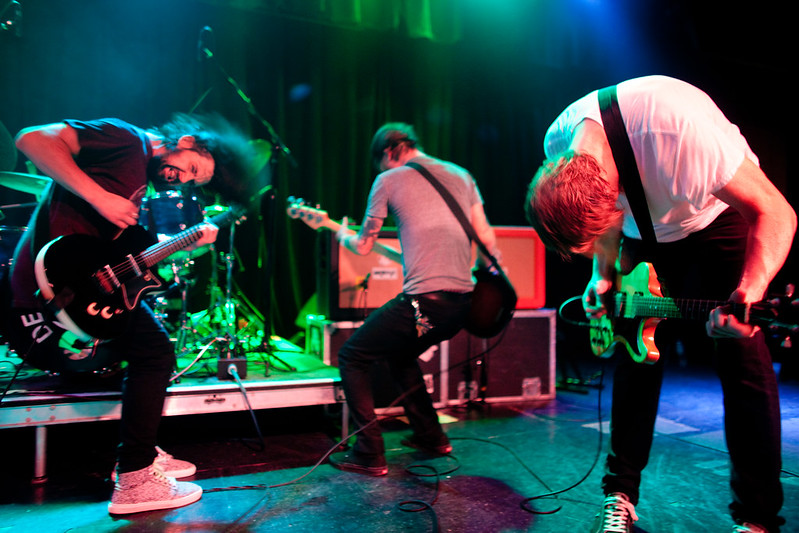 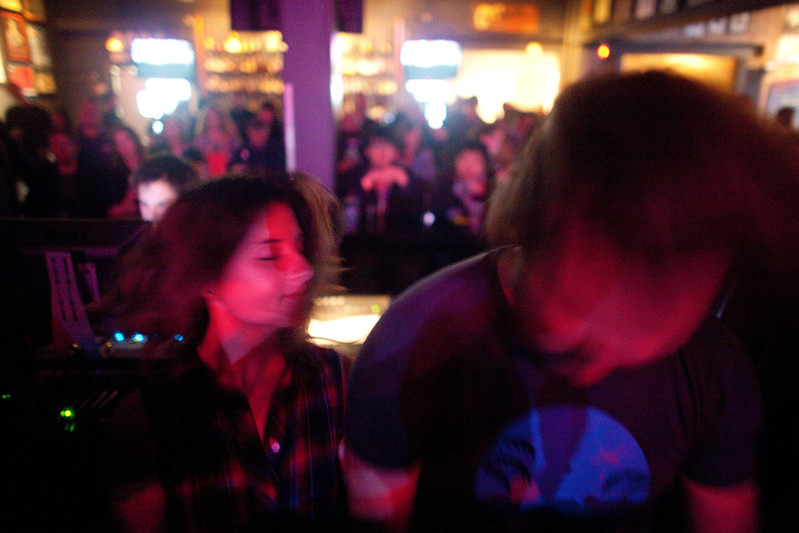 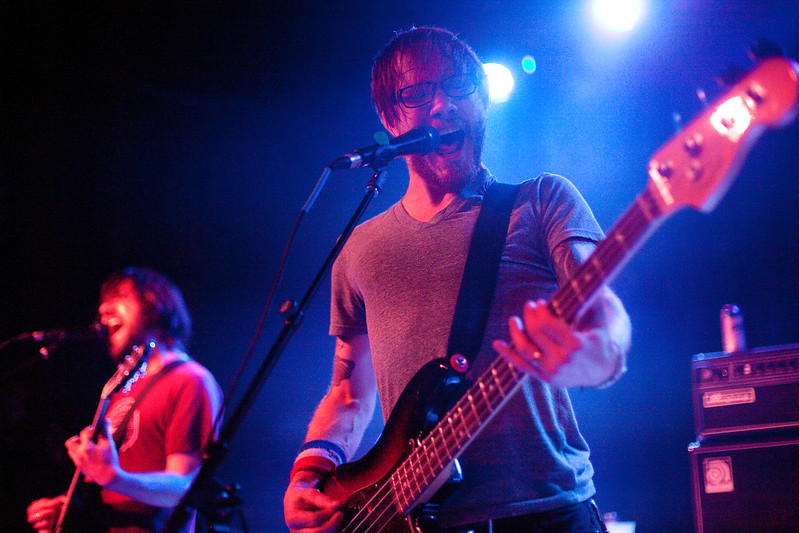 In the crowd, Dan McCarthy (McCarthy Trenching) commented last night that it’s like Oberst wrote those songs 12 years ago so he could sing them now, perhaps implying that it’s more difficult for a wealthy 35-year-old white man to channel that same kind of raw frustration and anxiety, but also that Oberst now has the chops to deliver them as reasoned, yet impassioned sermons rather than emotional vilifications.

And with that, Oberst as voice-of-the-populace is so much less fraught with the anxiety of facing a crowd that knows every personal song he’s penned since he was 14. The expectations here are different. The crowd wants Oberst only as a member of Desaparecidos, only as the guy voicing our deepest contemporary nervousness and providing the space to lash out about it.

After it was all done, the encore closed and the churning mosh pit stilled, Desaparecidos had genuine thanks in store for the audience. Oberst hung around on stage for a few moments, shaking hands with the front row, a sure sign of confidence and comfort. 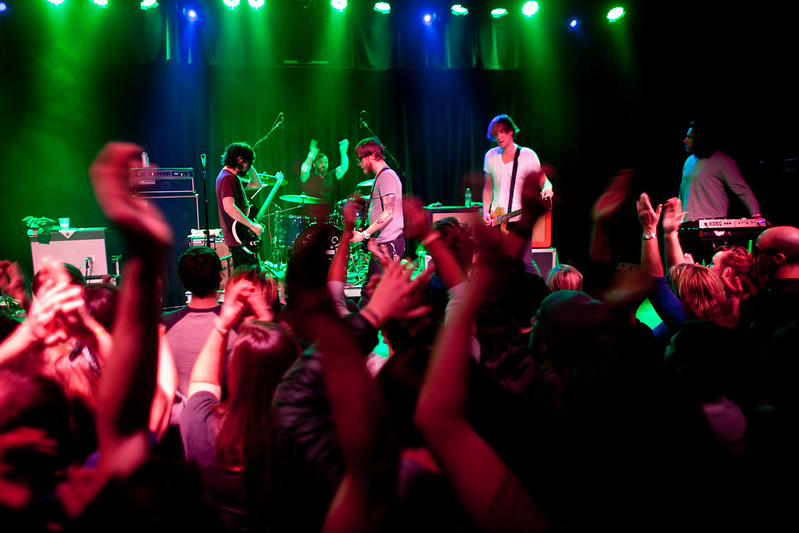 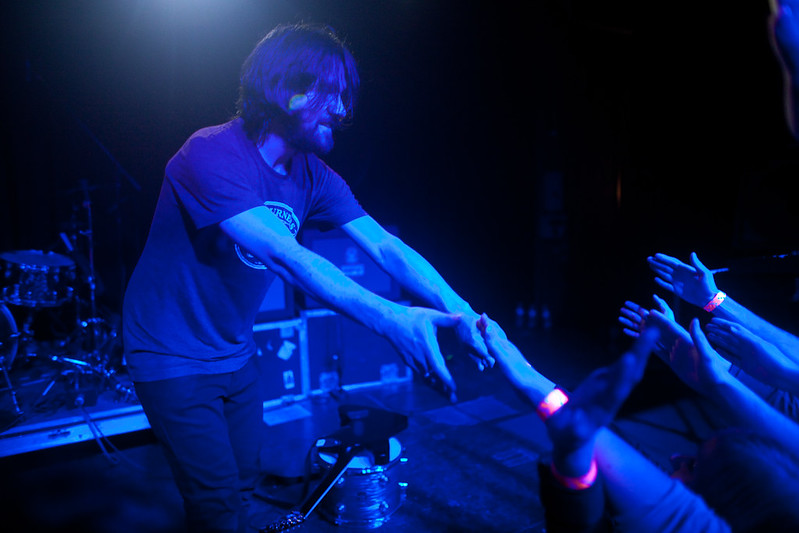