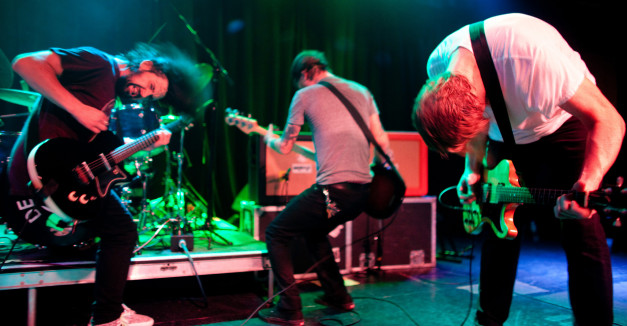 Expect to see a lot of Desaparecidos between now and June, when the band releases Payola. Earlier this month, the Omaha post-punk band announced the details of its first album in 13 years along with a new track “City on the Hill.”

Today, the song gets a music video.

It feels classically Desa: paranoid, anxious and too quick to really grip. But also face-up. Desaparecidos has never been one for sleight of hand or poker faces. The point is that it’s really easy to get the point.

Speaking of, Desaparecidos played Coachella yesterday and Conor Oberst wore the best t-shirt. It reads “Deport Conor Oberst” with a picture of Tim Kasher. We all want one, please.

Spin’s Chris Martins had this to say about the band’s set:

“St. Lucia are beaming prismatic synth-pop from the main stage, but I’ve got that earnest feeling and know exactly where I can score a vintage fix: the Gobi tent, where Desaparecidos are pealing out emo-addled post-punk with refreshing looseness. This is exactly the kind of scrappy, charged performance that artists of Conor Oberst’s stature can’t get away with (if they can even access it anymore), yet here he is in front of his old band, bleating “Greater Omaha” while a few hundred fans scream along until they’re red in the face. Everything about it — the Dubya-era political anxiety in the lyrics, the mosh pit on the floor, the chin-length hair on the band members’ heads — screams ’02 in all the right ways. Long live Saddle Creek.”

Together, the three videos, each directed by Frank Grimes, serve as an intimate introduction to the Omaha rapper, who released TKOmaha in 2013 and his latest, GENEius, back in December. In each, the camera stays close to TKO as he dances over his rapid-fire delivery, touching on everything from race in hip-hop to class and race issues in Omaha to his own skill.

On “NE State of Mind,” ambient production sounds like an early Lupe Fiasco cut while “Written in My DNA” takes a more caffeinated approach. “Zero Dark Thirty,” at four and a half minutes, gives TKO the space to dig deep into his own lyrics.

TKO’s next show is April 20 at The Hideout in Omaha. RSVP here.

The Lincoln hardcore band Bent Life announced national tour dates this morning. This, after yesterday’s story, in which we spoke to the band’s Brock Stephens about their forthcoming LP on Bridge 9 and his criticism of Hear Nebraska’s punk/hardcore coverage.

Bent Life has been one of the hardest touring Nebraska acts of the last few years. Check out the dates here:

Last month, we wrote about Omaha Performing Arts’ songwriting competition. It’s being held in conjunction with the musical Once at the Orpheum Theater May 12 through 17.

OPA is hosting the competition for any songwriter between the ages of 13 and 29. They’re asking for submissions of original music played on any instrument. Contestants have the opportunity for a meet and greet with the cast of Once and the winner in both age categories — that’s ages 13-18 and 19-29 — will get to record a demo with Mogis at ARC Studios.

The deadline for entry is April 17. Find all the details here.

At Sweatshop Gallery, Boston-based Pile plays with Noah’s Ark was a Spaceship and Stomach (RSVP).

Pile recorded its latest full-length, You’re Better Than This, in October with Ben Brodin at ARC in Omaha. The album was released in March and it’s been selling well enough that the band is already repressing. You’re Better Than This finds its strength on a loose-knit kind of indie-punk. Songs alternately rely on Richard Maguire’s wandering, troubadour voice and Matt Becker’s jangly, homegrown guitars. And, for whatever it’s worth, Pitchfork granted the album a reverent review, both projecting and cataloguing the band’s rise in the Boston and national scenes.

Reptar and Icky Blossoms make the Omaha stop on their tour together. They play Slowdown tonight after a couple weeks on the road. Athens-based Reptar released Lurid Glow earlier this month. You can hear our review of it here. Icky Blossoms is gearing up for its own sophomore release in May and released its latest track, “Living in Fiction” here. RSVP to the show here. Coaxed opens the show.

At The Zoo Bar, Chicago-based Lincoln regulars The Boxers play with Blue Sky Angel Parade and JP Davis (HN multimedia intern) of I Forgot to Love My Father. RSVP here.

As always, if we’re missing your show or a show you dig on our music calendar, please submit it or email editorial@hearnebraska.org.