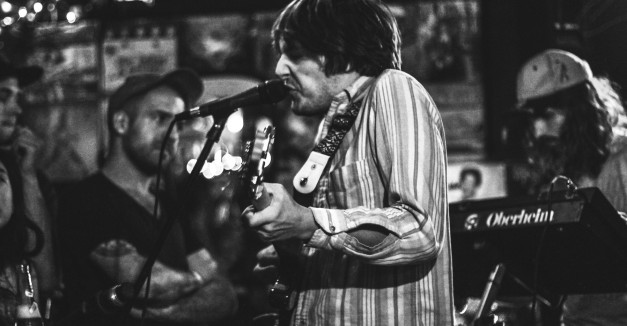 If there are any hangups to Reptar’s Lurid Glow, it’d be a difficult task telling someone what the record … is.

There are some keywords: funky, experimental, synthy, even — whatever it means — indie. But taken together, you’re still left to fill in the gaps, much like the record’s imagistic lyrics, sometimes crooned and sometimes growled, by Graham Ulicny, who lives in Omaha and fronts the Athens-based band.

For one, Reptar’s sophomore album, out on Joyful Noise, recalls elements of synth-laden musical eras past, notably the instrument’s nascent years as a new wave mainstay. But Reptar never sucks the fun out of the instrument, like an arty ’80s rock group might. Which actually helps make it seem more sincere.

Then there’s Ulicny’s voice, which can light-footedly jump around syncopations like an Ezra Koenig, before ripping open into sexual animalism. And even the brass parts, used on Lurid Glow in small, seemingly emergency portions, function as either windy melody lines or a soul-powered rhythm sections.

Above all, maybe Lurid Glow feels difficult to nail down because albums this fun and experimental rarely feel also so musically gorgeous and sincere.

Listen to the podcast here: