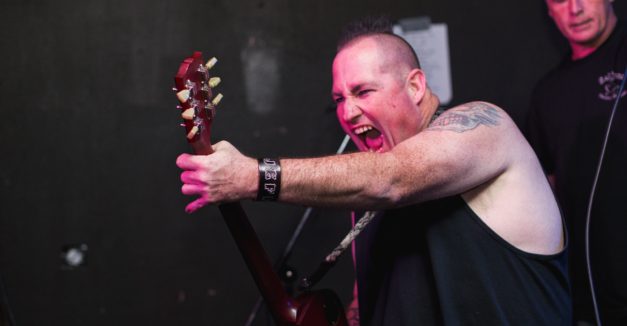 We are sorry to report the passing of Omaha musician Jeff Decker. A beloved member of the city’s punk scene, Decker was the longtime Cordial Spew guitarist and dazzled as Gene Simmons in KISS cover band KISSology.

Our hearts go out to Jeff’s family, friends and bandmates. He will be sorely missed.

There has been an immediate outpouring of community support via social media, which to us emphasizes his influence. Contributing writer MarQ Manner is currently at work assembling memories of Jeff from the people that knew him. Share photos and stories for publication by sending them to marqmannermusic@gmail.com or news@hearnebraska.org.

Right around the time that his label, Caulfield Records, was laid to rest in 2003, Nebraska-native Bernie McGinn moved to California to pursue photography. Those seeds were sown during his Good Life days, as McGinn captured a mix of the local music and skate scenes in the ‘80s and ‘90s.

Some of McGinn’s work was featured recently in California-based creative magazine Juxtapoz. The batch of photos comprise a look into underground culture during the time period between 1985-1995 (all but the one of Butanna taken in that decade). Among them are shots of iconic Nebraska performances by Nirvana and Fugazi.

Caulfield Records was founded in 1988 with Sideshow releasing its first album. The label enjoyed a heyday during the ‘90s with records by Giants Choir and Christie Front Drive. McGinn currently lives in San Francisco with his wife and 15-year-old daughter and works as product manager at Amazon Music. In his spare time, he’s still on the hunt for the next good shot.

“When I’m not working or spending time with my family, I like to stalk the skateparks and take photos of some of the great local skaters here, and get out to see live music as much as possible,” McGinn says.

View the feature here and see some of McGinn’s more recent shots via his Instagram.

We typically stick to music in this space, but there’s a cool event coming up next month at the The Joslyn.

The Joslyn? What is it? It’s a big building with art inside, but that’s not important right now.

Film historian Bruce Crawford hosts his 40th Tribute to Classic Films featuring the 1980 disaster spoof AIRPLANE! at the Joslyn Art Museum. The film’s lead actor, Robert Hays — Capt. Ted Striker himself — will be in attendance at the Friday, May 26 event at 7 p.m. The movie served as Hays’ debut, alongside Julie Hagerty and wacky comedy stalwart Leslie Nielsen.

Tickets are on-sale today and are $23. Find them available at Omaha area Hy-Vee Supermarkets.

It’s supposed to be a rainy weekend so why not spend it indoors. Find a few show suggestions below and a fuller listing on our statewide calendar here. Add your own via our contribute button here or leave them in the comments.

Arbor Night at The Bourbon – Dazzle Ships (formerly Life Is Cool), CJ Clydesdale Band and Bell Mine celebrate Arbor Day. Watch this video of Dazzle Ships, just before the name change, perform a satin-wrapped cover of Lincoln punk band Bogusman’s “Song About Chess” at Take Cover Lincoln below (who knows if they’ll play it, we just think it’s a riot). 8 p.m., $5, RSVP here.

The Morbs, The Lupines, Brazen Throats, Muscle Cousins at Brothers Lounge – The Morbs release debut album Morbs Attacks at Brothers Lounge with a trio of Omaha bands. Back in October, they graced the KZUM studio with a live performance on Hear Nebraska FM; listen here. 9 p.m. show, $5, 21-plus, RSVP here.

Tenth Street Tour – Greater Omaha Young Professionals hosts a walking tour of the 10th St Corridor, starting with a mini-market event at the Tenth Street Market Site. New Generation Music Festival is a partner in the event and has recruited musical acts Aly Peeler and Fosters to play the kick off. Music starts at 2 p.m. Find more details here. $10 entry for the event. RSVP here.

Founded at the south Lincoln church by Jack Levick in 1972, Abendmusik has aimed to enrich its congregation and the community through fine and performing arts. Over the last 40-plus years it has brought the likes of The Vienna Boys Choir, Paul Winter Consort, The Estonia Male Choir and conductors Robert Shaw and Aaron Copeland.Sunday’s concert is an oratorio, which combines the full orchestration of the symphony and the choral aspects of an opera. The program will feature local vocalists Caroline Kouma and Abendmusik executive director Drew Duncan as well as a collaboration between the Abendmusik chorus and Concordia University A Cappella Choir.

Duncan says such works are a long-standing Abendmusik tradition. He expressed his excitement about the two works in particular.

“When you combine [these performers] with the Poulenc Gloria and the Puccini Mess di Gloria, two works you do not get to hear live often, a magical musical experience is waiting to happen,” Duncan says.