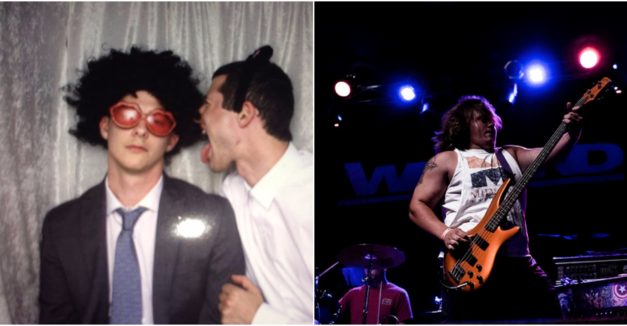 Jerkagram’s latest album Outer Limbs sounds distinctly as though it comes from a place of deliberate experimentation. Brothers Derek and Brent Gaines build around eight different musical ideas, grabbing onto a grounding chord progression or riff and following it to a logical conclusion.

You can hear the drive to keep things interesting, not only for themselves but for their audiences, which is also why the Gaines’ keep a crowded touring schedule.

“We are trying to keep busy with a big picture in mind,” Derek says. “Scenes change fast. If you fade away for a year, you can become nobody and forgotten. It’s rough out there for up and comers!”

The brothers Gaines started Jerkagram in their native Connecticut, came up in Brooklyn and subsequently moved to L.A. for a change of pace just a few years ago. That has led to collaboration with The Melvins producer Toshi Kasai, who worked on Outer Limbs. The duo continues to tour often and has a few new projects in the works.

In advance of the shows, See Through Dresses’ Sara Bertuldo caught up with Derek on working with his brother, his picky gear selections and moving out west. Read their conversation below.

Sara Bertuldo: Hi, Derek! How are you?

Derek Gaines: Living the dream in a cafe in Nashville!

DG: I find it easier because Brent and I are really close and share a very similar musical taste which makes the connection for playing music with each other come very natural. We bicker like all other siblings but it never gets out of hand. We pretty much grew up playing music together. Brent started when he was little and he got really good at the drums which motivated me to pick up the guitar and get serious with it.

We have a wide range of influences. Classical, heavy metal, free jazz, kraut rock, film scores. The list goes on. We grew in Connecticut close to New York City and was easily exposed to really great music. What really influenced us was the NY avant garde scene in our early 20s. We would frequent John Zorn’s venue Tonic quite often and that expanded our idea of what music and sound was.

SB: When you go on tour, you seem to hit it really hard. Do you have a particular city you’re fond of playing?

DG: We like to tour! There are a bunch of cities that we really enjoy playing. New York City, Minneapolis, Seattle and Vancouver are probably our favorites, to name a few. They have really great people and wonderful communities. Where we grew up in Connecticut, that scene has really come up to and I’m proud of that. That’s mainly due to Mark at Manic Productions who has made Connecticut a great spot.

DG: My gear situation has really solidified. I’m picky about it. The white SG has been my baby for a while. I haven’t changed anything on it since I bought it. I love the warmth and the tone of it. I run it through a pedal board which consists of two loop pedals, two delays, an overdrive, a fuzz pedal and a synth pedal. I haven’t added anything a while because I don’t want my live set up to be too complicated. All that runs through a 2×12 68 Fender Bandmaster combo. It’s an amp that I used in that studio when recording with our friend Eric on our first LP. I played through it once and fell in love. I doubt I’ll be changing that anytime soon. If you’re REALLY curious, I did somewhat recently put in Eminence speakers. One red coat, one blue coat.

SB: You were originally living in New York and moved to LA. What brought you to California? Has moving to a different coast affected the way you write music?

DG: We started out in Connecticut as an experimental improv band and then moved to New York in mid 2011 where we started getting serious about writing music. After our lease ran out in Brooklyn we wanted a bit of a change of pace. Our parents were both living on the west coast so we figured it would make sense. I don’t think the coasts have necessarily changed the way we write. We attribute the trajectory of our writing more to self growth and experience. It’s more of an inner influence than an outer.

SB: What do you do when you’re not on tour? If you weren’t using music to express yourself, what other outlet would you choose?

DG: When I’m not on tour I am usually working in restaurants and watching hockey or hockey clips if the season isn’t going on. Or thinking about hockey. It’s a good sport. I have no other outlet to the world aside from music and rooting for the New York Rangers. I generally like to think that playing music is keeping me alive and motivated. I have no idea what I would do without it which is why we tour frequently and have continually been trying to push ourselves out there to make this thing work.

SB: What is Jerkagram cooking up next?

DG: We just recorded an LP and EP with longtime engineer for The Melvins, Toshi Kasai. We plan on releasing those within the year. We also have another 10 week tour in the works towards the end of the year including two really cool indie festivals. Potentially doing some other recordings and / or collaborations. We are trying to keep busy with a big picture in mind. Scenes change fast. If you fade away for a year, you can become nobody and forgotten. It’s rough out there for up and comers!

PREMIERE: “Falling Into Me” by Leighton

The hard rock musicality of Leighton’s first EP, Primitive, is heavy, dripping with smashing guitar solos, powerful drums and steady bass. The EP boasts metal influences in addition to blues, creating a sound responsible for the jaws hitting the floor of those listening.

A simple rhythm pumps through “Falling Into Me”, though the song is anything but simple. Garrett Helling’s guitar solos combined with Skyler Roland’s vocals unleash a poetic madness, leaving the track oozing with abandon and heartbreak.

The song takes all torture and pain behind the crushing disappointment that can accompany relationships, and frees the pent-up energy. It questions how far one can go for a loved one before breaking and falling for someone who causes your stomach to lurch every passing day.

Listen to “Falling Into Me” below:

David Nance releases jangly new track “Give It Some Time”

Omaha lo-fi rocker David Nance found his way into ARC Studios following the release of his critically acclaimed More Than Enough dropped last year, and now has shared the first listen from the resulting album.

“Give It Some Time” is vintage Nance, his vocals distant and echoing but emphatic and emotional. The guitars jangle and the rhythm, nailed down by Tom May and Kevin Donahue, charge and sway.

The new track, which debuted earlier this week via Post-Trash, will appear on the trio’s forthcoming album Negative Boogie. As Nance told us in January, it was recorded in roughly three days with Ben Brodin at ARC, during which they experimented with vintage equipment and steel drums. The album drops July 14 on Ba Da Bing Records.

Listen to “Give It Some Time” here.

Omaha rapper TKO throws the gauntlet in his brand new video release for “L.M.S.” Directed by Obscure Diamond, it features the Omaha rapper in a cold concrete setting with little frills aside from a smidge of jittery visual effects. As usual, TKO is serious, warning he will “attack with passion” those looking down on his movement.

Here’s a look at what’s going on over the next couple days. Find a fuller listing at our statewide calendar here and add your own shows via our contribute feature here.

Dossey with Seymour, Ridgelines at Duffy’s Tavern – Austin, Texas electronic artist Dossey comes to Lincoln on the heels of a brand new EP Electric. Sarah Dossey started the pop project at local club Swan Dive, and is also a member of a couple folk and bluegrass bands in Austin. Listen below. 9 p.m., $5, 21-plus, RSVP here.