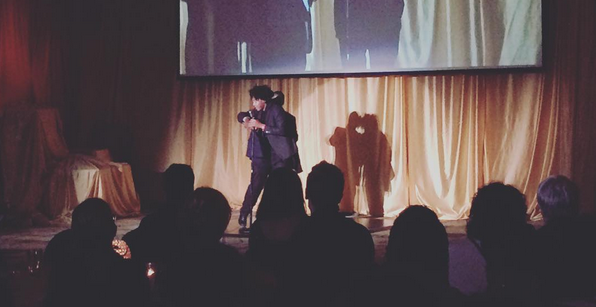 Both, Twinsmith among 20 area musical acts honored at Omaha Entertainment and Arts Awards

The Omaha Entertainment and Arts Awards honored some of the area’s finest local music acts for a tenth straight year Sunday, handing out awards in 20 categories spanning diverse genres and accomplishments.

Omaha hip-hop duo Both took home Artist of the Year, in addition to best hip-hop/rap act. It was a breakout year for the team of emcee Scky Rei and deejay INFNTLP, with saw the release of critically acclaimed BOTHSUCKS EP on Make Believe Records, a lead performance at Maha Music Festival and countless other diverse concert billings.

Omaha indie quartet Twinsmith nabbed album of the year for its Saddle Creek Records debut Alligator Years, which dropped in May. The band toured heavily throughout the U.S. this year, and released a handful of entertaining videos, not least of all this sock puppet interpretation of the album’s title track.

The separation anxiety felt at a distance from one’s soulmate is not as simple as yearning. It’s much closer to a hollowness, like walking around without a part of yourself, and wondering where it might be, what it’s feeling, with only moments of past experience to grab onto.

Mesonjixx vocalist Mary Lawson conveys these feelings in her voice above all. The Lincoln quartet’s single “Without You,” the studio version of which debuts today, begins with that desperate longing. It reminds one of the initial spark, how it lingers even after, however faintly, simultaneously yielding pain and hope. It’s the soulful qualities of Lawson’s delivery reveal that underlying pain the most.

The foursome — comprising Lawson, guitarist Myles Jasnowski, bassist Josh Bargar and drummer Kekeli Dawes — has hustled on the live stage for the better part of the last year, playing with frequency all over Omaha and Lincoln. Though we’ve heard this song live consistently, today’s release marks the band’s first studio recording, completed with James Fleege at Silver Street Studio and mastered by Doug Van Sloun at Focus Mastering.

It was last November when Mary asked me to drum for her.

She was throwing some show at Parish, and she wanted me to learn a song of hers. I wasn’t sure what it was, or why she didn’t just play it on her own, but she wanted musicians to back her. We (the elusive Nic Brown on the keys and Lee Lohrberg on bass) set up a rehearsal, and she sent me the show date. I had nothing else better going on, so I kept it clear.

I honestly didn’t think much of it. The song was straightforward; it was a two-chord, basic R&B groove with standard song structure and clear, concise lyrics. All it needed was a backbeat, so once I laid it in, it all fell into pocket quite easily. We set another rehearsal for good measure, but I was sure I didn’t need it. I never worried about forgetting the song- once I heard that hook, the tune practically played itself.

That was the tune that convinced me to continue the project with Mary (I’m glad she asked me to keep working with her). It was the only way I could hear her sing it again. Then Myles came on board for the performance at Meadowlark, and I wanted to hear where he would take his solos next. Bargar came into the fold, and playing that groove alone became my favorite thing.

As gigs began lining up last spring, this tune became our calling card, so this had to be the one we took to Fleege to record that summer. The song has played to galleries, coffee houses, dive bars- and in the same way, it has taken another life in the studio.

Over the past few gigs, Mary has asked the group to push the song out of our sets to make room for new ones. And I understand that- it seemed like the most personal song from her first project, and it didn’t match the direction of our new tunes, bold, sexy, fun, upbeat. I haven’t asked her much about it, but you can sense from her performance the emotional weight she carries with it.

Me? I just really love kicking off our shows with the massive hits we’ve added to the live version. It’s still my favorite opener.

So here’s Mesonjixx’s first studio recording, “Without You.” If you promise to learn all the lyrics for our next show, maybe I can convince Mary to tack it on to our set as an encore.

If you were searching for a year-end hardcore review, Crucial Changes has you covered.

Omaha hardcore blogger Keith McGrath gave his albums and best show of 2015 in his longtime blog space Saturday. It covers bands nationwide, including Horrendous, Violent Reaction and much more. I won’t spoil the rest, but it’s certainly a corner of the music world our coverage doesn’t spend enough time with.

Head over to Crucial Changes here to see McGrath’s 2015 picks.

Tonight, Portland duo Love Cop plays Milk Run with Thick Paint, Little Ripple and The Way Out. The Burger Records signees released Dark Ones in April, but as we detailed yesterday, the album is a stark contrast to the sunnier side of the Fullerton, California, label’s roster.  RSVP to the 9 p.m. show here.