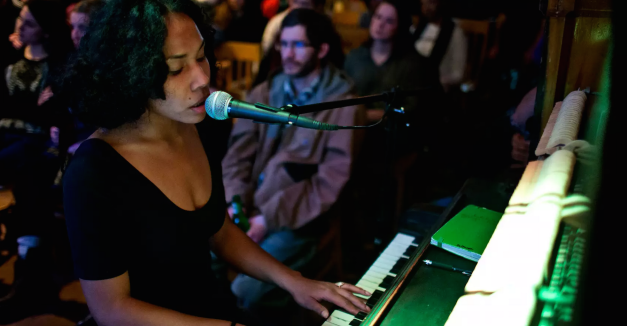 [Editor’s Note: This was the on-air intro for Mesonjixx when they appeared on HNFM. The show was Monday, March 9.]

Depending on the backing, Mary Lawson’s Lincoln project Mesonjixx is able to embody very different sides of the performance spectrum.

At its jazziest — fully adorned by bass, guitar and drums — it can live as a quieter, loungier Esperanza Spalding relative. But in Lawson’s vocals, there’s a rarely a hint of exertion. Moments of belting might wreck the thin veneer she allows the audience to sit behind, during the songs’ blanker moments. The level of plainspoken vulnerability and wavering falsetto just as much recalls confessional, vocal-oriented singer-songwriters like Joni Mitchell. Even as the chords and rhythms fashion soul and jazz spirits.

Soft meditations on love and love’s fatal flaws can live equally as near-ballads on which a crowd can project, or as quiet entries into a catalogue of self-exploration.

And it’s a band of some great young local talent that joins Larsen in the studio tonight. There’s guitarist Myles Jasnowski, who you might know from I Forgot To Love My Father and A Ferocious Jungle Cat, percussionist Kekeli Dawes of Jazzocracy and bassist Josh Barger of Josh Hoyer and the Shadowboxers.

But here’s their performance live on our KZUM show: