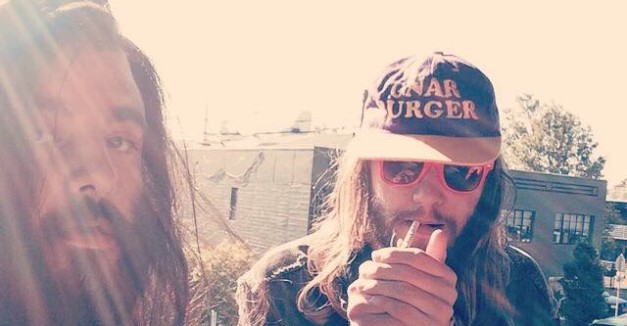 It’s unlikely for a Burger Records band to draw more influences to the electro-industrial Skinny Puppy than the sunny garage rock of The Growlers, but that’s the case for Portland, Oregon lo-fi pop duo Love Cop. Although their past albums meddle in easy bedroom pop, vocalist and keyboardist Phil Salina says Love Cop’s future is turning down the lights and matching their quirky lyricism with dark, slow goth pop.

“To be honest, we listen to very little garage rock or beach pop,” Salina says. “We don’t listen to that modern type of stuff.”

Love Cop released their latest, Dark Ones, in April. It bargains a goth gaze as vocalist Phil Salina’s low growl contributes to the eldritch atmospherics. The songs are still almost as lo-fi as their four-tracked counterparts on Love Cop’s self-titled first album, but this time, the lower production furnishes Salina’s ghoulish synth and guitarist Duffy Rongiiland’s somber riffs.

Salina attributes the departure from a more Burger-like sound to his and Rongiiland’s longterm mutual attraction to darker genres. He says they write a lot of melody and hooks, but try to keep it “weird” and with a “bite and edge” to the tone because of the goth and industrial bands they grew up on.

“We did many tours just the two of us, with drum machines and sequencers, but it’s a lot more fun playing with a full band,” Salina says of playing on tour with members of Funeral Gold and Panaderia. “There’s a lot more energy and the crowd likes it more. You can lose yourself in the music more as a performer too.”

Salina and Rongiiland relocated from near Long Island, New York to Portland, Oregon in 2009. The two networked and eventually connected with Gnar Tapes. When Salina and Rongiiland started hanging around Gnar Tapes more, Salina says two of the label’s bands, The Memories and White Fang, encouraged them to start their own band so they could tour together.

Working closely with bands like White Fang, Pop Zeus and The Memories encouraged Love Cop’s prolificacy. In Gnar Tapes’ house,  called “Gnarnia,” Salina says bands record nearly every day in a sort of “friendly competition” which each other.

“All those dudes are just coming out with albums and popping them out which inspired us to work so we weren’t hanging out at the same house and not doing anything,” Salina says.

All the work got Love Cop noticed by California beach pop tape label Burger Records within their first year as a band. The label dropped 2 True / 2 Real in July 2013 and reissued Eat Yr Heart Out and Pop Magick is Real — originally released on Gnar Tapes and Lolipop Records, respectively —  last October.

That’s not to say they don’t appreciate the typical beach goth Burger Records persona, Salina says. Love Cop is more interested in putting a “twist” on indie pop music and with Dark Ones, Salina says they were comfortable going back to their interests and indulging their dark pop with more electronics, synth and noise.

“We just got bored of making the same type of album and wanted to go a different direction,” Salina says. He adds that for future releases, Love Cop aims for heavier noise rock, like Big Black or Swans.

Love Cop created Dark Ones as a departure from lo-fi stoner pop and the rest of their labelmates. The band teased their interest in more somber instrumental intentions with “Hologram Pt. II” on 2 True / 2 Real and “Witch of Webs” on Eat Yr Heart Out, but mainly kept the lo-fi beach pop at the forefront. For Dark Ones, Love Cop’s usual lyricism of blunt, weird sex stories finds a home within its somber, darkwave lo-fi.

Salina says the inspiration for the biting humour in their lyrics — like “illuminati in your eyes, a pyramid between your thighs, I just can’t let you die” in “Star 69” — comes from Lou Reed, Morrissey, and even Drake, describing what they pulled as “depressive, millennial jaded.”

“Our labelmates write about the more happy side of promiscuous sex and partying,” Salina says. “We’re a bit older than those dudes so we wanted to do a darker perspective, like the day after a party and you just kind of feel like crap.”