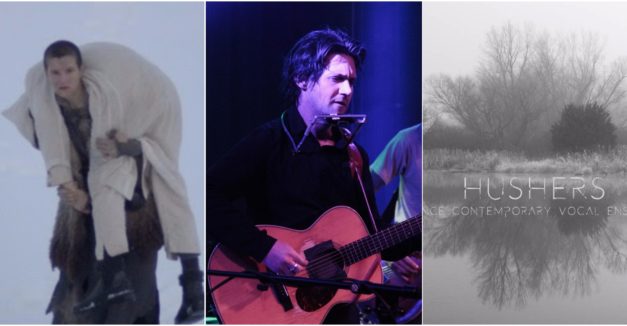 When Big Thief signed to Saddle Creek last year, outside of their Brooklyn home base, it was a relative unknown. One critically-lauded debut album, Masterpiece, and a host of impressive live performances made for a massive 2016 and, with its latest announcement, the band somehow gains more steam.

The indie rock four-piece has announced follow-up full-length Capacity, out June 9 on the Omaha label. The album’s eerily beautiful first single “Mythological Beauty” debuted yesterday via All Songs Considered, and the band has shared an accompanying video.

“Mythological Beauty” showcases the band’s tenderness and turmoil and frontwoman Adrienne Lenker’s vocal depth and lyrical intimacy. The video, earthy and adventurous while emotionally harrowing, depicts Lenker leading a weakened man — bandmate/guitarist Buck Meek — through the woods and into a ritualistic healing circle. Watch it below:

With the announcement comes a fresh batch of U.S. and European tour dates, which includes an Omaha stop with Conor Oberst. Speaking of that …

The Omaha-native singer/songwriter will play again in his hometown this summer, this time on Military Street just outside Reverb Lounge.

The show announcement — for Thursday, July 13 — was one of two “Waiting Room Outside” events dropped yesterday by One Percent Productions. Indie folk band Fleet Foxes will play a similar outdoor event on Friday, Sept 29. It is their first time in Omaha since April 2008.

Fleet Foxes re-emerges after a five-year hibernation with a world tour and its first album since 2011’s Helplessness Blues. Watch the trailer for Crack Up, out June 16 on Nonesuch Records, below:

As for Oberst, it’s a quick turnaround from his March 9 show with the Felice Brothers inside The Waiting Room. That concert, part of his Salutations tour, sparked some controversy after Oberst butted heads with the crowd (as we wrote then, it did not seem to affect the quality of performance).

Tickets go on sale for both shows this Friday.

In other news, Oberst has released a new video for “Barbary Coast (Later),” the ninth track from Salutations. Directed by Cris Gris, it follows a group of young boys on a search for treasure that leads them through neighborhoods, to a carnival, a concert and into a missing spot on a map. Watch it below:

HN readers may know vocalist Amanda DeBoer Bartlett best for her work as founder and director of the Omaha Under The Radar festival, which will celebrate its fourth year of bringing adventurous new music to multiple Omaha venues this July. This Nebraska native is no stranger to the performance side of the stage, either, having worked live and in the studio with a diverse range of artists including Holly Herndon, Deerhoof, and several cutting-edge contemporary chamber ensembles. One of those chamber groups, the Quince Contemporary Vocal Ensemble, has just released their sophomore album, “Hushers,” on New Focus Recordings, and it’s one of the most immersive set of vocal pieces you’re likely to hear all year.

If “classical” vocal music makes you think of bombastic operas or church hymns, “Hushers” will turn your preconceived notions into exciting, boundless possibilities. This disc features four pieces that showcase the diversity of creativity in contemporary music, managing to tap into universal themes while inhabiting their own unique, personal spaces. The album takes its name from the brief opening piece “hushers” (2014), which is structured on the sounds of a set of consonants unique to the Russian language. Rather than realizing a text, the music focuses on the subtle differences in these sounds, pitting them against one another in shifting rhythmic triplets and building blocks of unusual texture. As a librarian, I hear a certain kinship with maintaining the “silence of the stacks” peeking through this piece as well. Closely-spaced microtonal vocalizations gradually overtake the husher-sounds toward a haunting crescendo, leaving us with a piece that feels much larger than its modest five minutes of running time.

Kate Soper’s “Songs for Nobody” (2006) follow, setting three delicate nature-oriented poems by Thomas Merton to playful recitation. Harmonies frequently erupt effortlessly out of intoned unisons, and these short pieces incorporate a wide range of compositional approaches, including polyphonic passages and mouth sounds that would be comfortable within “hushers.” These are affecting short pieces that highlight very modern sounds with gentle allusions to Renaissance motet writing, and the angular melodies found here highlight the acrobatic technical skills of Quince.

Kaija Saariaho’s “From the Grammar of Dreams” (1988) works with considerably darker texts by Slyvia Plath, and consequently it features the most dramatic shifts in texture, dynamics, and style on the disc. Saariaho’s five short movements perhaps demand the most focus among these works to digest, alternating between melodious, comforting approaches, almost-silent whispers, and heavy rhythmic breathing redolent of aggressive Inuit throat singing. It’s appropriately evocative of complex, dreamlike states, though not all of these dreams have happy endings.

The final piece on “Hushers,” Giacinto Scelsi’s “Sauh I-IV” (1973), is another voice composition made of non-textual phonemes and microtonally-shifting intonations, the perfect bookend to the opening piece. Mostly unknown during his career, Scelsi was among the first composers to embrace time and spatial philosophies drawn from eastern musical traditions, but his unique approach can be felt in a variety of drone-oriented musical styles today across many genres, from classical to post-rock to experimental bands like Nebraska’s own Bus Gas. “Sauh” also brings together the worlds of composition and improvisation: initially created by notating recorded improvisations, the first two movements are duets that are transformed into quartets in the final movements through imitative counterpoint. Formal considerations aside, the aural result is haunting and downright trance-inducing, subtle shifts oscillating within a narrow pitch range that reaches toward infinity. As microtonal shifts melt and undulate inside a larger drone, musical punctuation comes through occasional rhythmic punctuations and shifts between molto and senza vibrato, like sonic waves hitting a shore and sliding back out to sea.

Make sure you don’t get left at the shore yourself: you can pick up this powerful new Quince disc from New Focus Recordings.

Tonight, Slowdown has a stacked billing with Minus the Bear, Beach Slang and Bayonne. Minus the Bear has made a long career of mixing proto-punk and indie rock stylings, and just released its sixth studio album Voids March 3 on Suicide Squeeze Records The album is a kind of reset for the band, with a new drummer and a start-from-scratch mentality that results in “an album that feels inspired by nostalgia but not limited to it,” writes Paste’s Scott Heisel. 8 p.m. show, $25, RSVP here.

In Lincoln, sludge/doom pioneers Jucifer comes to Duffy’s Tavern. The Georgia-native band has toured and released albums since 1993, and is known for its nomadic lifestyle and deafening live show. Lincoln’s Manslaughterer and Omaha’s Super Moon round out the bill. 9 p.m., $8, RSVP here.