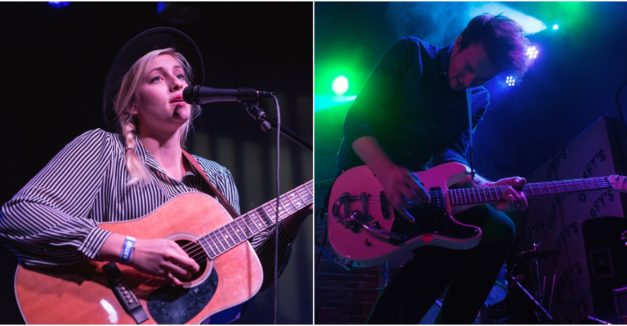 Hear Nebraska FM has booked a pair of busy Lincoln folk acts to round out 2016.

Singer/songwriter Andrea von Kampen and folk/rock quartet Walk By Sea will both appear live in the KZUM studio for the weekly two-hour Nebraska music program. Von Kampen plays on Nov 28, while Walk By Sea takes the following week.

Von Kampen joins the show to promote her forthcoming EP Desdemona out Dec 14. She has recently worked with Lucas Kellison, both on this project and a Christmas album that will come out on Thanksgiving Day. She’ll play an album release show Wednesday, Dec 14 at Vega with David von Kampen, Danny Firestone and Brian McGovern (RSVP here).

Walk By Sea just recently returned from its first out-of-state tour, a nine show, nine day affair that ended with an additional date opening for Fruit Bats. The band entered the studio last weekend to begin recording its first full-length album, after releasing a pair of EPs — Until The End and As The Night — over the last couple of years.

Less than a month after Saddle Creek Shop closed its doors and moved its warehouse, its delicious replacement has been announced.

Zipline Brewing will move into the space between Slowdown and Film Streams at 721 N 14th St with plans to convert it into a taproom. The announcement comes just weeks after the Lincoln brewery opened its second location in South Lincoln.

Saddle Creek’s Jason Kulbel said in a news release that while the record label is “pretty selective about our neighbors,” Zipline’s proposed plans meshed.

“We wouldn’t have relocated Saddle Creek’s warehouse unless we believed in Zipline’s vision for its space,” Kulbel said. “They are going to be a great asset to the development and the entire neighborhood.”

The brewery’s new location represents the latest in a string of forged connections with the Nebraska music scene. Beer Nebraska, the HN benefit it hosted in its warehouse in September, is among the handful of concerts and cultural events Zipline has been involved in recently.

Zipline co-founder Marcus Powers told the Lincoln Journal Star it has no plans yet to expand its brewing operations outside its flagship location at 2100 Magnum Cir. According to the same article, the taproom aims to open next spring.

We are looking for enterprising, self-starting candidates for multimedia, editorial and marketing for positions beginning January 9, 2017. We are offering both paid and unpaid positions this semester, based on available funding. Apply for spring internships no later than Friday, December 16, 2016. Please email Hear Nebraska’s managing editor at andrews@hearnebraska.org with any questions.

Here’s a look at concerts this weekend. Find a fuller listing at our statewide calendar here. If you do not see your show or one you plan to attend, leave it in the comments or email us at news@hearnebraska.org.

STRFKR, Gigamesh, Psychic Twin at Vega – Portland, Oregon indie rock band STRFKR is back in Nebraska, touring on the strength of its Nov 4 full-length record Being No One, Going Nowhere (Polyvinyl). It’s founder Joshua Hodges’ fifth record under the moniker and another slick pop entry into the band’s catalogue. And at ninth on the US Indie chart, it is already outperforming its 2013 predecessor Miracle Mile. Minneapolis-based producer/songwriter Gigamesh and Brooklyn electro-pop duo Psychic Twin open the show. $25, 9 p.m., 18-plus, RSVP here.

Justin Peter Kinkel-Schuster living room show – The Water Liars front man comes to Omaha/Council Bluffs on the back-half of a west coast living room tour. Kinkel-Schuster released a solo album Constant Stranger Sept 30 on Fat Possum. The songs “feel like snapshots documented, processed, and archived, filled with stories and images of how the small and often overlooked everyday moments affect the larger ones.” This album comes after a string of Water Liars releases in three straight years from 2012-2014. No word on the address; that comes after ticket purchase. $20, find them here.

Daughter with Vancouver Sleep Clinic at Slowdown – London indie rock band Daughter comes to the Slowdown main room tomorrow night, touring the U.S in support of its sophomore album Not to Disappear. Released Jan 15 on 4AD Records, it finds the band at its most sonically deep and sprawling yet. Its rich production comes thanks to Haefeli and Nicolas Vernhes, who have worked with Animal Collective, Deerhunter and The War On Drugs. Vancouver Sleep Clinic opens the show. $16 today, $18 tomorrow, 9 p.m., all-ages. RSVP here.

Y-Incision, Slut Gutter, Cordial Spew, Super Moon, ORPHEUS at The Down Under – Omaha grindcore band Y-Incision releases new album Disasturbator tomorrow night at The Down Under. Digipak copies will be available at the show or via the band’s Bandcamp page. $5, 9 p.m., 21-plus, RSVP here.