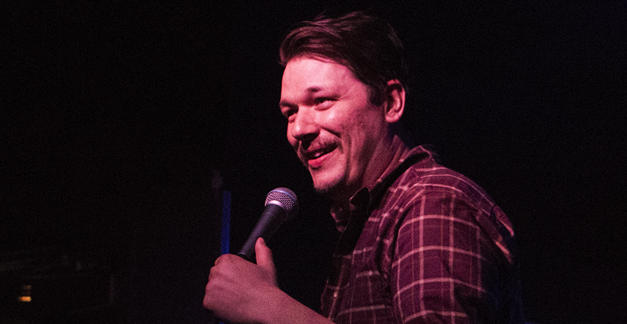 Editor’s note: Omaha native comedian Zach Peterson has struck out from his current Chicago residence on a Midwest tour leading up to a homecoming show at Reverb Lounge on March 11. Along the way, the former musician will compare and contrast his travels with touring as a band and share some observations from the road. Read on for part two.

If you’re a traveling musician or a comedian you know each town has its own community, its own culture, a collection of history, values, and shibboleths. In comedy it is often referred to as “the scene.”  Like, “The Chicago Comedy scene”  or “The Omaha Comedy Scene.” You get it. I always cringe at the word “scene” because I’m reminded of people with bad hair cuts listening to The Refused in the early 2000s and all the parties I was uncomfortable or too drunk at. Regardless of my feelings, each town has something going on and I have done enough traveling to see at least a passing glance of how things work in other cities.

Right now, I sit in a hotel room in Columbus, Ohio, the midpoint of this current tour. It is the farthest east I will venture before going through Missouri and Kansas back to Omaha. Over the past few days, I have been in Champaign, Ill., Aurora, Ill., South Bend, Ind., and Fort Wayne Ind. These cities and scenes have the same thing in common, the fact that they have people or a group of people creating a space for comedy merely to fulfill their own desire to see comedy in their city. Much like people that are into punk rock or hardcore turn their basement or garage into a makeshift venues, comedians in smaller towns around the country turn their local bar or art space into a makeshift performance spaces. Not only do these spaces provide a place to perform, but they also offer a place for a community to flourish. The “scene” goes where the comedy is, and the comedy is wherever there is a stage a stool and a microphone. On this tour I have performed above a pizza place, an event space in an advertising agency, a comedy club, a brewery and a bar. When I was touring in bands, it was very similar, you knew you were performing, but you never had an idea exactly where.

Micheal Timlin at The Drop | photo by Zach Peterson

I spent two days in South Bend with Micheal Timlin performing at The Drop Comedy Club, a club that is in the back of a small lounge wedged between an Arby’s and a prison, a very unlikely place for comedy. Regardless, the three shows were great, the crowd was attentive, good natured and ready to have a good time. The reason being, is that many people who truly care about the success of the club have created a space where comedy can succeed. Jon Baldizon, Zach Boyce and Jake Wells all live in Chicago now pursuing comedy, but over the past three years I saw the work and care they put into creating that space and it really has paid off. Now it is under the tutelage of  the likes Jim Kliss and Jason Staples and it is still a great place to perform.

The Drop is unique for a lot of reasons, but it is not the only place where comedy scenes have sprung up. Champaign has Jesse and Justin Tuttle to thank for curating and and hosting the long running and successful CU Comedy show in Champaign-Urbana. Alex Price and all of “Let’s Comedy” has made Fort Wayne a great tour stop for anyone heading through the region. Even expanding into producing shows in throughout Indiana and Michigan. Tonight in Columbus, Dustin Meadows is producing the show at Mikey’s Late Night Slice under the Whiskey Bear brand. A moniker used on shows all over Columbus and even an annual festival known as The Whiskey Bear Comedy Festival. Matt Drufke has been producing phenomenal shows throughout the Chicago suburbs since I have been in the city. I have been lucky enough to do a few of the shows and they are always a good time. I have always found it interesting that an entire scene exists on the outer realms of the Chicago scene, and at least for me Matt has always been at the center of it. If you are reading this in Omaha and you are intrigued by talk of all this independent comedy, you should rest well knowing that Omaha has a strong independent scene in places like The Lookout Lounge, as well as the annual Crom Comedy festival [editor’s note: 2017 is the last year for Crom].

Throughout this tour I have been treated so well by everyone. All of the comedians have been so helpful and kind and have really went above and beyond to make sure that I have a place to stay, a good time at the show and have everything I need. This is all because they want comedy to happen. I am a verified nobody, and every single one of these individuals are taking time out of their day to do me a favor so I can run my record and be prepared for my March 11th recording in Omaha. So why would they do it, why would they put on a show and work on promoting it for months? They do it because of community, they do it because they love comedy, they do it because that is what comedy scenes do, they have comedy shows.

Zach Peterson is an Omaha native comedian living in Chicago. He returns March 11 to record his live album at Reverb Lounge. RSVP here.

Here/After, it should be noted, released its That Colour EP in September last year and next performs with electronic hardcore band I See Stars and Echoes at Lookout Lounge on April 11. RSVP here.

Tonight, Boston soul band Lake Street Dive hits Slowdown with Joey Dosik. The quartet is on tour in support of its latest LP Side Pony, out on Nonesuch Records. Drummer Mike Calabrese hopped on the phone earlier this week to chat about the new record, the band’s group progression and longevity and which legendary drummer he would choose to face in a drum-off. Read the conversation here. 8 pm show, $26 tickets, all-ages, RSVP here.

Also tonight, Omaha hip-hop duo Both plays Reverb Lounge with Chicago hip-hop group Slumpgang777 and fellow Omaha acts Third Eye Merchants and The Dilla Kids. For Both, the show comes at the center of a Midwest run with DJ Kethro and Slumpgang down to SXSW, where the Omaha duo will participate in the Nebraska Exposed showcase for a second year in a row on March 15. Tonight’s show starts at 9 p.m., $7 cover, all-ages, RSVP here.

Find a fuller listing of shows at our statewide calendar here. Looking to share new music, tour news or other info? Email the details to news@hearnebraska.org.