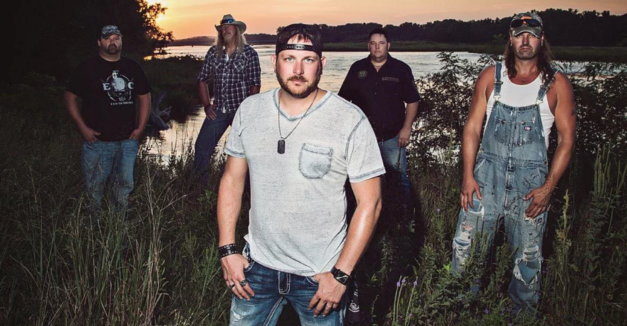 It was a demo tape that spurred country singer Tim Zach’s statewide notoriety. On a lark, the Nebraska-native sent his best stuff to a radio station helping conduct the 2009 Colgate Country Showdown, a nationwide contest that draws stacks of entries. Then, Zach was just looking for exposure and for a band to play with. But that tape led to a local Grand Island concert and then the contest’s state title at the Knox County Fair.

“By winning that competition, it gave me some credibility with other players in the Nebraska music scene,” Zach says.

Those players are now country band Whiskey Bent, with Zach at their front. The band’s 2012 debut “On The River” and the ensuing 2014 full-length album have made the band a highly sought-after local act throughout Greater Nebraska. The boys are regulars at the summer county fair and country music festival circuit, and have played alongside national acts like Lynyrd Skynyrd and Alabama.

Before Whiskey Bent opens the year’s first Hear Grand Island concert this Friday, Zach chatted with Hear Nebraska about his big break, the band’s myriad influences and the “Cornhusker Country” scene. Read on for our Q&A.

HN: Tim, you got your start as victor of the 2009 Colgate Country Showdown, a nationwide talent contest that attracts thousands. How did you get involved and what was that experience like?

TZ: I submitted a demo tape to the radio station that was conducting the competition and was selected to perform at the local show in Grand Island. From there I went on to claim the state title at the Knox County Fair in Bloomfield, Neb. It was a great experience and one that really got my career kick started. At the time I was just starting to get my feet wet and was trying to find a way to gain some exposure in hopes of getting a band started to go out and play shows. By winning that competition, it gave me some credibility with other players in the Nebraska music scene. I was fortunate to hook up with a group of guys that are not only fantastic players but great people that over the years have become more like brothers.

HN: You’ve got a deep, growly voice in the same vein as Toby Keith and Johnny Cash. I’m guessing you grew up with country music, but is there some other influence that you find leaks into your songwriting? If so, what?

TZ: Yes, I have always been an avid country music fan but I also enjoy other genres of music as well. I grew up in the ‘80s rock era, and it’s hard not to be influenced by artists like AC/DC, Motley Crue, and Poison to name a few. One thing that I like about the guys in Whiskey Bent is that we all have influences from different types of music and when all of those pieces are put together, you end up with a sound that is our own. We like to write and play songs that have a strong country lyric and a rock and roll feel.

HN: Whiskey Bent has a huge following in Central Nebraska and throughout the Midwest. What is it about your band you feel fosters a connection with the region?

TZ: First off I am very grateful for the fans that continue to come out and support us! I would say the one thing that has helped with building that fan base is that we try to remain available to our fans. We understand that without such great fans coming out to see our show night after night, we wouldn’t be able to continue doing what we love. In addition to that, we relate the people who come out to the shows. We all grew up with Midwestern values and we’ve also partied in a few cornfields over the years!

HN: You’ve opened for big country and southern rock acts like Lynyrd Skynyrd and Sawyer Brown. What’s one interesting anecdote that sticks out from those marquee shows?

TZ: You know, those types of shows are always fun! It’s great to play your music in front of huge crowds in hopes that you can earn a fan or two along the way! I don’t think any of us ever thought that we would have been blessed with the opportunities that we’ve been given, but apparently we are doing something right. As far as playing with acts that are nationally known, all of those guys are people just like you and I as well. Some of them are very cool and they treat you really well and want to get to know you … Others not so much. Honestly though, I think the most fun I’ve ever had playing a national show was with Trent Tomlinson. He invited me on stage to do a Johnny Cash cover with him, and we all sat and talked music on his bus after the show for hours. I have always been a fan of his songwriting and I’ve learned a lot from watching his live show. The guy just brings it every single time he hits the stage. His energy is contagious!

TZ: I think that we have a ton of talented artists right here in Nebraska in all genres of music. On the “Cornhusker Country” side of things there are a ton of artists that are just out there killing it right now, touring like crazy and putting out original music. The resources to record a quality product are right here as well. We love recording at Fuse Studio in Lincoln. It has the quality you would find in LA or Nashville, and it’s right here in our backyard. We all support one another as well, and that makes our scene better. I think that is very important!

In the music world, there is a cornered market on earnestness. The often flattering term is typically reserved for folk and indie pop acts, who seem to attract it based on a cheery aesthetic or an assembly-line love song. It’s framed this way by selection, regardless of sincerity’s darker musings pushed to the fringes.

Jtvrdik’s new album IRONS attacks that concept, both in form and in content. Born of its maker’s twisted musical vision, it clashes together classic pop crooning, head-bobbing synth punk and new wave despair. The result is an exercise in craft and a commentary on the “post post-modern” world.

IRONS’ vast soundscapes are enveloping, and where their orchestration is a mind-trip, the accompanying beats are constantly flirting with danceability. The project writhes in a darker corner of the same sonic room occupied by, say, Omaha peers Routine Escorts. That’s thanks in part to production assistance by The Faint’s Clark Baechle and bassist Joe Mickeliunas, who help ground the album in the present where an unfettered songwriter might get lost in his own creation.

It is a feat, then, that IRONS is so deeply personal while hinged on freneticism. Tvrdik’s voice is, at times, so electronically obscured as to be distant that it underscores the larger context. These songs foreshadow change and grasp for meaning in a world overwhelmingly plugged in. Much of that, he’s said, comes from a deep-dive into his own busy life, and the intimacy translates even at the album’s most specific self-exploration.

Perhaps that is what makes the album “earnest” — if not commercially so, then in definition. Even as its voice feels conflicted, the conviction is in the sonic and conceptual push forward. True earnestness, if it can exist, is not a projection.

IRONS is out now. Listen to lead track “Something” below:

BluesEd, in conjunction with Hear Nebraska, will present a series of songwriting and composition workshops to be held at the Holland Center and hosted by Omaha singer-songwriter Brad Hoshaw. The first of the events are on Saturday, June 3 at 9 a.m. and June 20 at 7 p.m. Later this summer, Kris Lager hosts a workshop July 10.

BluesEd is an Omaha nonprofit that since 2001 has “kept the blues alive” by offering opportunities for young musicians to collaborate and to learn playing and live performance techniques. The songwriting workshops extend BluesEd’s reach to all ages with both events being open to the public for a $10 fee.

Register for the June 3 workshop here.

Here’s a look at what’s going on in shows over the next couple of days. Find a fuller listing at our statewide calendar here and add events yourself here. Email news tips, story ideas, comments and anything else Nebraska-music-related to news@hearnebraska.org.

Saint Christopher Webster, The Devil’s Cut, Halfsies on a Bastard at Duffy’s Tavern – Malcolm, Nebraska, punk-country hybrid band Saint Christopher Webster are in the midst of a two-month U.S. tour with Lansing, Michigan’s The Devil’s Cut, and the pair of bands plays its second Nebraska show in as many days tonight at Duffy’s. Always a good excuse to revisit our 2015 interview with Webster here. Lincoln crossover thrash band Halfsies on a Bastard opens the show. 9:30 p.m. 21+. $5. RSVP here.

Justin Lepard Album Release Show with RealEyez and JMNM at Vega – Justin Lepard released the single “Start Over,” a meditative trip-hop track littered with reflective, gravelly vocals and his “psychedelic cello,” last Friday. Tomorrow night, Lepard releases his debut album, the eight-song “The Chronic Condition,” at Vega along with Lincoln electronic musicians RealEyez and JMNM. The album expounds on the template of “Start Over,” with cello-driven, electronic-influences combined into pensive, psychedelic grooves. 9 p.m. 18+. RSVP here.

BB EYE with Beyond Peace, Janitor Scum and BIB at Milk Run – BB EYE’s and Janitor Scum’s midwest tour stops at Milk Run on Thursday. The two oddball punk bands, from Missouri and Italy, respectively, both have new records out, with BB EYE’s “How to Stop Worrying and Start Quacking” released earlier this month and Janitor Scum’s “LP” dropping last October. Iowa City hardcore band Beyond Peace are on the bill too, and Omaha’s BIB opens the show. 9 p.m. $5. All ages. RSVP here.