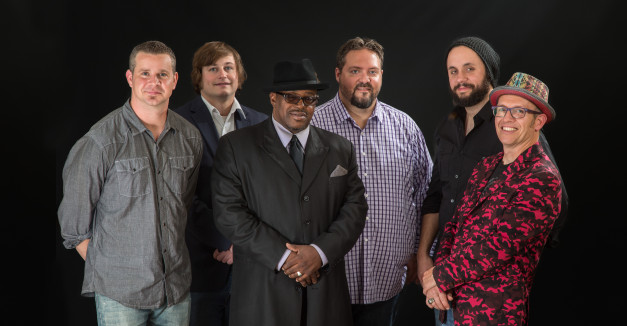 Its vocalist, Joseph “Smokey” Holman, boasts a resumé that extends back to the ‘70s, recording with influential soul artist Curtis Mayfield and the band Love’s Children.

Entry to Tweed Funk’s Lincoln debut is $6. RSVP to the 9 p.m. show here. By the sound of it, they should feel right at home in Lincoln’s blues sanctuary.

This will be the foursome’s sixth total record since its formation in 2007, developing a southern-flavored rock style that plays like a Black Crowes-Lynyrd Skynyrd hybrid. It’s all the more pronounced on tracks like “Crush,” which cruises through a sun-baked, guitar-fuzzed tale about moving on down the road.

The Good Life just put out another new single on the run-up to the band’s first LP in eight years.

“Forever Coming Down,” the third release from forthcoming album Everybody’s Coming Down. premiered yesterday on Consequence of Sound. Frontman Tim Kasher’s lyrics depict the scene from the (stellar) cover art by Dan Black: a pyrotechnic-lit carnival and a brigade of low-hanging hot air balloons. Kasher toasts “to love grown cold” like the ashen remnants of fireworks.

Musically, the song basks in a schism-like turmoil, a bit more at odds with itself than the anthemic prior release “Everybody.” Kasher sings a pop-punk style vocal line, flanked by Stefanie Drootin-Senseney’s melodic bass line and Roger Lewis’s head-bob drumming. The guitars, in contrast, shoot and spiral like wayward lightning bolts, dropping into chord progressions before taking off again.

Everybody’s Coming Down is out August 14 on Saddle Creek Records. The next day, The Good Life plays Maha Music Festival (RSVP here) before heading out on a U.S. tour.

Brad Hoshaw and The Seven Deadlies play Hear Omaha today at noon. The weather’s looking just fine for the free, noontime roots rock set. RSVP here. Earlier this week, we caught up with Hoshaw to discuss his new film-scoring plans, calling an audible on his annual songwriting retreat and how he wrote the song “Talking To God.”

And speaking of, the man who plays the rip-roaring mini-solos in that song, Matt Whipkey, is opening tonight for country legend Dwight Yoakam at The District in Sioux Falls, South Dakota. Whipkey will perform as a duo tonight with Omaha singer-songwriter Tara Vaughan. This is Whipkey’s second stint opening for Yoakam this summer, after a late May show at the Surf Ballroom in Clear Lake, Iowa.

Yoakam’s 2015 release, Second Hand Heart, has been received by critics as a comeback album of sorts. Listen here.

As always, please visit hearnebraska.org/events for a fuller listing of the day’s shows.