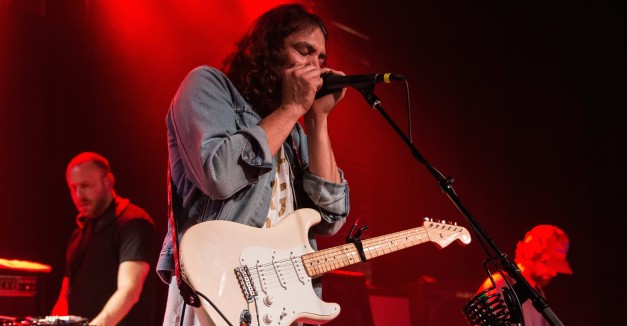 All of a sudden, after recording a new album in famous Muscle Shoals, New Jersey sextet The Everymen will find themselves on tour with one of the biggest indie rock artists of 2014.

The progressive punk band, which includes native Nebraskan and former Bandit Sound drummer Mitch Cady, has been asked to open a few dates this June with The War On Drugs. Cady says that they had no idea this was in the works until he heard the news last Saturday.

“Adam [Granduciel] just contacted me and asked if we wanted to do some dates,” says The Everymen frontman Mike Venutolo-Mantovani, better known at Mike V. “We opened for them once about four years ago at Music Hall Of Williamsburg, but that’s really it. He hit me up fully out of the blue.”

This news comes after a busy stretch for the New Jersey rockers, having played SXSW (which you can read our review of here) while prepping to record in the early part of the year. They tracked at Nutthouse Recording Studios in Sheffield, Ala., with producer Ben Tanner.

“He made sure everything went very smoothly, and it was the most efficient I’ve ever seen a band in the studio,” Cady says.

Located inside of a former, fully-renovated bank building, the studio has recorded the likes of Percy Sledge, Clarence Carter, Drive-By Truckers and Spooner Oldham. In fact, Cady says that Oldham’s old Wurlitzer organ still resides there, and was utilized during The Everymen’s recording session.

“It had a really cool messed up sound — kind of like a messed up, distorted 8 bit video game soundtrack — so we used it on the record,” Cady says.

The yet-to-be-named record is slated for release next Spring via Brooklyn’s Ernest Jenning Record Company. Dates with The War On Drugs are Listed below:

Ever felt the need to incessantly tweet at your favorite touring band to urge them to play Nebraska? There is a new template that makes it easy.

As with all HN endeavors, the goal is to show that Nebraska is a cultural destination, not only overflowing with talented, hard-working natives, but more than worthy of touring bands’ time and effort as well. Tweet at your favorite band using our handy program here.

TourNebraska.org is part of our Omaha Gives campaign, the one time of the year during which we ask for your support via donation. Your support allows us to continue to promote Nebraska arts and culture and produce engaging, entertaining content and programming.

You can schedule your pledge now at our Omaha Gives webpage here, or, log on Wednesday, the day of the event. This year, a $3,000 bonus is awarded to the group with the most unique donors from midnight to 8 a.m., and scheduling your pledge now will help us reach that goal. Every little bit helps, and no pledge is too small. Thank you for your consideration.

Mannheim Steamroller has announced its  limited Omaha run for the 2015 holiday season.

Grammy Award winner and Mannheim Steamroller creator Chip Davis will direct and co-produce performances with MagicSpace Entertainment. Listen to our feature interview with Davis here, during which we met with him at Omaha label headquarters American Gramaphone and his Ponca Hills acreage.

Tickets for the Omaha production of Mannheim Steamroller become available Friday, July 24. They are available exclusively through www.ticketomaha.com, by phone or at the box office located at 13th and Douglas streets.

Tonight, the Slowdown hosts Anti-Flag in its front room, with The Homeless Gospel Choir and War On Women. RSVP here. The Pittsburgh-based punks are famous for political activism, focusing on anti-war and anti-imperialist activism and aligning with advocacy groups like Amnesty International and Greenpeace. Anti-Flag has been active since 1992, releasing nine albums on a number of different punk labels including Fat Wreck Chords and Side One Dummy. Its tenth studio album, American Spring, comes out May 26 on Spinefarm Records.

Elsewhere, Des Moines staples Gloom Balloon and Christopher the Conquered return to the Zoo Bar tonight, the first of back-to-back shows in Nebraska. The duo of Patrick Tape Fleming and Christopher Ford have made Lincoln a regular stop throughout Midwest consistent touring, and have built somewhat of a loyal following through their theatrical pop performance art.

Gloom Balloon released its cassette Songs That Couldn’t Swim on March 17, the first-ever cassette from indie Iowa label Maximum Ames Record. Ford recently released the title track from his own forthcoming album, I’m Giving Up On Rock And Roll, which wrapped in March 2014 and which he hopes will release later this year. Read more about the recording sessions at famed Ardent Studios and his tour across Italy in our feature story published earlier this year.

For a fuller listing of tonight’s shows, visit our musical calendar at hearnebraska.org/events.