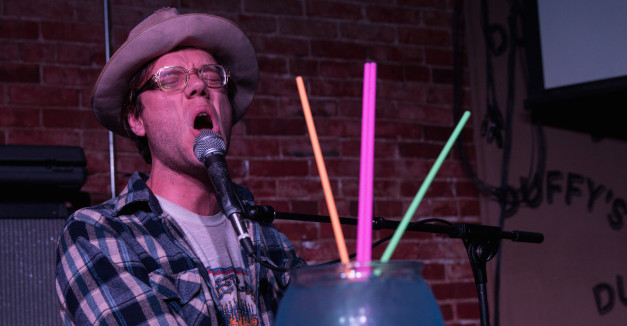 During a recent performance of tongue-in-cheek ballad “I’m Not That Famous Yet,” Christopher Ford was about to wind into the second refrain when he derailed himself.

The Iowa singer/songwriter, performing as Christopher the Conquered, typically embellishes amidst verses, directly addressing the crowd to elaborate on lyrical themes. In this one, he apologized to his mom — who was present at the Des Moines Social Club show —  and stated almost self-deprecatingly, his intentions to steal your girlfriend as inevitable.

Some of the audience members laughed, and some appeared too unnerved, as though he might actually leave the bar for his hotel with their dates on his arm. To the latter, he pauses to give his assurance.

“Whether you’re sitting here in the basement or listening while you’re driving your car or doing your dishes, whatever you’re doing out there in radio land, fellas, every fella in the Iowa Public Radio listening radius, be warned, because Christopher the Conquered is coming for your girlfriends.”

The lyrics themselves depict a deplorable transformation in an artist alongside his fame. Ford’s live performance allows him to wield a satirical hammer and drive home a more subtle point: even the prospect of becoming so famous as to lose oneself is both ridiculous and terrifyingly real.

After ten years of writing, recording, and performing, Ford finally feels like his songwriting has made the proverbial leap. Over those years, Ford has plunged into every corner of the music business with a doggish devotion to the Iowa music scene: recording and performing as his main project Christopher the Conquered; playing in other bands; starting Maximum Ames Records in Ames, Iowa, and learning how to record and produce records; serving on the Des Moines Music Coalition, which aims to build a diverse music community in Des Moines, Iowa.

Implicit in his resumé is a clear desire to foster and share musical growth, whether it is his or other local artists, with as many ears as possible. This weekend, he’ll bring that mission back to Nebraska, as he plays O’Leavers in Omaha tomorrow and The Zoo Bar in Lincoln on Saturday.

Only recently did he come to feel that, for his own music, a full-scale recording project was warranted.

“I felt like I was writing songs that were really good enough to deserve a full-on, go-big-or-go-home kind of approach to making an album,” Ford says.

That album, I’m Giving Up On Rock And Roll, is slated for release (he hopes) by the end of this summer. Part of that process involves minutiae, such as finding the right PR firm, a task he is half-immersed in while simultaneously explaining it over the phone.

Ford and his band traveled to Ardent Studios in Memphis in March 2014 to record. The actual recording process demanded a level of investment — emotionally, financially, timewise —  that made it, in his eyes, his most ambitious project to date. They spent hours of pre-production sessions at his home, selecting the songs they felt best fit and arranging the parts for additional instrumentation.

An impressive roster of accomplished session musicians provided backing vocals, the brass section, and other parts. That includes vocalist Susan Marshall, who has backed Lynyrd Skynyrd and Lucinda Williams, and vocalist Reba Russell, who sang on U2’ Rattle and Hum. Ford says this pushed them to give greater effort.

“The most intimidating thing was the pedigree of some of the studio musicians that we hired was way out of our league,” Ford says through a laugh. “The horn players [were] Broadway-level horn players … and so we felt like we needed to … be better.”

They coordinated everything with the aid of a proper producer, friend and Gloom Balloon partner Patrick Tape Fleming. Ford says the two have long been creative backboards for each other, and that Fleming’s style as a musician and producer is to focus on the creativity and energy while having less regard for technical correctness. This involved testing the limits of volume knobs or telling the engineer to roll with one mic instead of the seven he was arranging.

“This tension [was] created between the people that know what’s [technically] right and wrong and Patrick, who just literally doesn’t know what’s right or wrong, but knows what sounds good,” Ford says.

Ford and Fleming seem instinctually accustomed to creating together in this aggressive, direct manor. In Gloom Balloon, the pair fly around the concert space, climb all over each other, lift fans into the air, all while blasting their instruments and voices. In the studio, their bluntness with each other lives at the edge of friendly joking and brotherly quarreling.

“We sort of thrive off of giving each other shit,” Ford says. “… sometimes we’ll take offense to it, but it’s a natural thing for us to just be very direct with each other. We care a lot, I guess.” 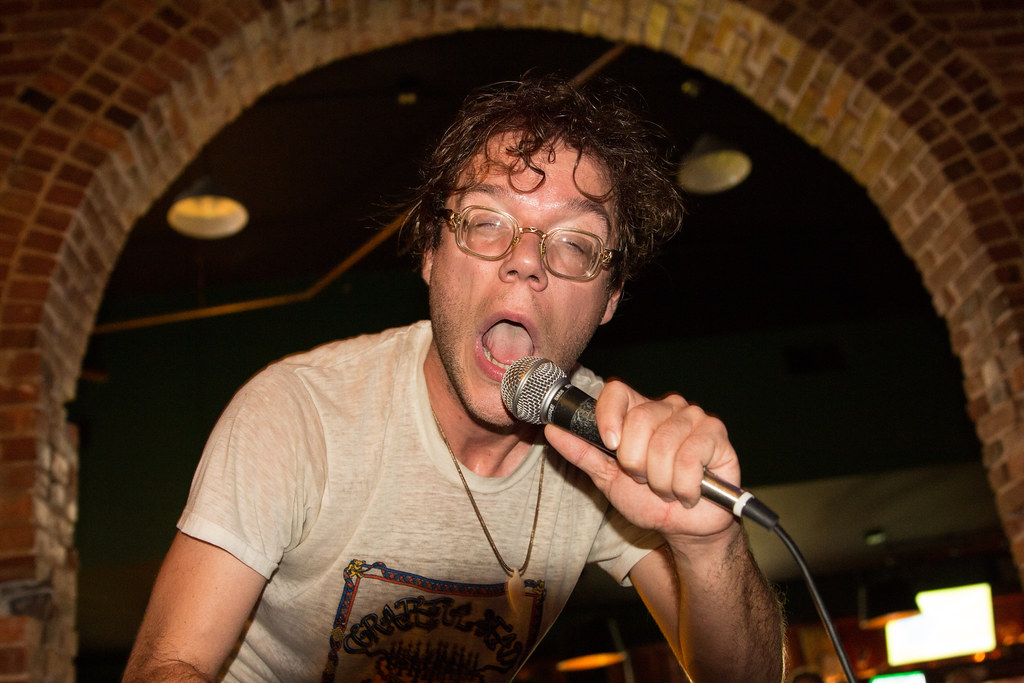 photo from Lincoln Calling 2014 by Will Stott

That same directness, mixed with humor and satire, is a hallmark of Christopher the Conquered songwriting. “I’m Not That Famous Yet” is a glowing example from Ford’s live repertoire and forthcoming album.

The song climaxes in complete exaggeration, either with an explosion of percussion or the crescendo of Ford’s voice. The narrator predicts that “people will hate me for what I’ve become,” so much so that they “pull me down and kill me then.” The hyperbole is a defense mechanism, a reminder to maintain the proper balance between creating art and promoting it.

It’s almost meta in a live setting. You get the feeling that he sings about the show he’s currently playing when he performs it, and more importantly, how the whole interaction will be rendered meaningless once he attains that level of fame. Peel off the mask of the monster he creates in the song, and it reveals something Ford is wary of in pursuit of musical success. Though the goal is to reach as many listeners as possible, there’s a risk of losing sight of the art itself.

“I feel like that concept is very universal, that we all have a dream or something we’re striving after, and the actual process of striving after a dream can destroy us or destroy our lives or consume us to a point of unhealthiness,” Ford says.

Ford brings such an intense, soulful energy to each performance that even if the nuances in his songs whiff with the audience, he still conveys the emotion and mood with his vocals and facial expressions. In late 2014, Ford toured Italy as Christopher the Conquered, accompanied by saxophonist Kyle Gowen and vocalist Gemma Cohen, in support of his live album A Passing Melody. The tour would test his knack for non-verbal communication.

In May 2014, a PR firm working with his record label, Maximum Ames, reached out to Rocketta Booking, which books many foreign artists for tours around Italy. They agreed that Christopher the Conquered would be a good fit, and booked a 26-show November-December run.

For all of the logistical items on the checklist — putting together a band, getting an International Drivers Permit — Ford barely gave himself time to consider how performing in Italy might look or how they would be received until they were ready to play on their first night. Though crowds were always good-sized — he guesses 40-60 per night in the small listening rooms they played — he realized quickly that the language barrier might be an issue.

“I had some audiences that were 100 percent not English [speaking] at all,” Ford says. “I have storytelling aspects and layered meaning, so even if people do understand some of the words, it can be deeply misunderstood or misconstrued.”

For the most part, Ford played in towns or venues in which his band was the only musical performance of the week, which drew engaged, attentive crowds, a major positive that allowed him to adjust on the fly. He used members of the audience who did know some English to set the energy of the show, learned a bit of Italian, and made light of the language barrier each night.

“I learned quite quickly that the power of music to speak for itself, and that emotion is communicated through facial expression and melody and tone of voice,” Ford says.

One night, after a show in Breganze, the band was invited across the street to play a private show. The villa was owned by a man who had shown up late to the venue and missed their performance. Ford became fast friends with the man, and played some of his own songs as well as some Tom Waits, over which the two bonded.

“He had a pure white baby grand piano, like what John Lennon has on the poster for the album Imagine,” Ford says. “I’ve never seen any living quarters like it.”

Now back stateside, he is touring throughout the Midwest and gearing up for the release of I’m Giving Up On Rock And Roll, his fourth studio album. As he continues to search for PR candidates, he waxes about the importance of the artist coming to the table from a position of power in such negotiations, as an equal partner in a transaction. He specifically references the relationship between an artist looking to promote his or her music and the platform — be it a magazine, blog, or website — through which that is possible. He worries that many acts settle for what amounts to lipservice from some publications, which gives them page-views and drives advertising. Instead, blogs or websites ought to trade honest music criticism for the right to debut an artist’s work.

“It’s a partnership,” Ford says. “If you’re giving them exclusive debut of a song or [album], the least they could do, hopefully, is give some thoughtful feedback and write about it, whether it’s good or bad.”

In his view, though, artists have to earn it. An article he penned over the summer on Minneapolis’s City Pages website reads, in-part, like an internal assessment.