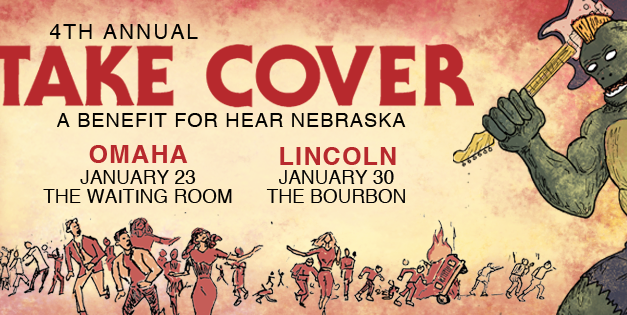 Tonight, we host our final Take Cover fundraiser of 2015 at The Bourbon in Lincoln, a follow-up to last week’s Omaha show.

Take Cover asks about 15 Nebraska musicians and songwriters to play two songs this evening: one original and one cover by another Nebraska artist. Maybe we’re biased, but it’s one of the most fun music community events of the year: a chance to see what everyone has been up to, who’s influenced by whom and, if you’re not that familiar with the local scene, one the best primers on the wealth of local variety and talent.

We’ll have raffle prizes, including a $50 gift card to Iron Brush Tattoo, two passes to Lincoln Exposed, a gift card to Meadowlark Coffee, a $20 gift card and t-shirt from Lefty’s Records, a $25 bar tab at Vega, a $20 gift card to Bread and Cup, as well as a t-shirt and mug from Ploughshare Brewery, a gift basket from Cultiva and Hear Nebraska merch.

Check out the lineup (and a little of who is playing what) below. We can’t wait to see you tonight. Music starts at 9 p.m. RSVP here.

If you missed it yesterday, here’s a taste of what you could be in for: John Klemmensen covering Bright Eyes from Take Cover Omaha last week:

Pop punk and hardcore outfits Teenage Bottlerocket and A Wilhelm Scream were set to play The Hideout in March for a night off during their tour with Pennywise.

Black Heart Booking announced last night that Pennywise will join the bill and the show will be moved to Slowdown. Tickets are now $25 instead of $10. Black Heart Booking’s Lucas Wright says on the event page that he hopes people who already purchased tickets to the original show will have them honored at Slowdown, though it doesn’t seem likely. If that’s the case, all tickets will be refunded.

Slowdown is a great venue, but the location change and addition of the veteran punk band, definitely changes the atmosphere from The Hideout’s tight-knit, all-ages feel.

Multimedia intern Marco Meyer and contributor Molly Misek spent some time with Feel Tight last week, getting comfortable in the cultish robes and weird attitude that together surely drive the band. Check out the photo essay here.

Christopher the Conquered, helmed by Christopher Ford, recently finished a massive tour of Italy and the recording of his fourth studio album. He tells contributor Andrew Stellmon that he feels it’s his best effort to-date. Read about it here.

Big Slur is the new project of Deleted Scenes frontman Dan Scheuerman, which seems so far like it will be experimental noise.

This week, Songwriter Sunday at Meadowlark Coffee and Espresso will benefit Finding Muluneh, an ongoing fundraiser that covers costs of transportation and treatment at Joy Center for Autism in Addis Ababa, Ethiopia. The funds raised ensure the Muluneh, an 11-year-old autistic boy can receive proper care.