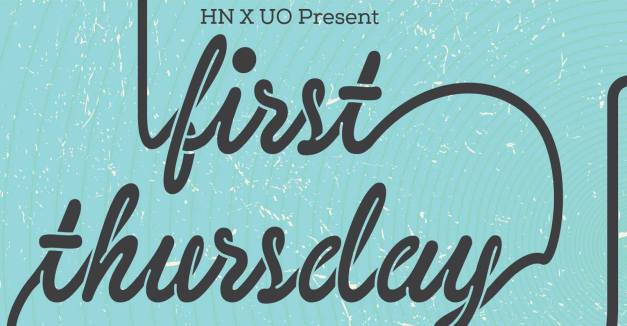 Yesterday we dropped the Omaha Take Cover lineup and have since been able to confirm Andrew Gustafson of Noah’s Ark Was a Spaceship will participate alongside members of See Through Dresses, Twinsmith, Icky Blossoms and more.

Today, we’re releasing the lineup for Take Cover Lincoln on Jan. 30 at The Bourbon. Check it out:

Take Cover is our annual concert fundraiser where we ask about 15 songwriters to perform two songs: one original and one cover by another Nebraska artist. We’re also have raffle prizes from local businesses at both shows. It’s a not-to-miss community event. We recommend both Lincoln and Omaha if you can swing it.

In other HN events news, our First Thursday Urban Outfitters showcase is tonight at the clothing store’s north downtown location.

The sludge punk quartet Bogusman is coming down from Lincoln to play with Omaha’s Congruency. For Omahans unfamiliar with Bogusman’s synergistic playing and vast sonic range of tempos, they’re a treat. As always, there will be free pizza and beer, and some local vendors and artists to check out. More details here.

After the UO show, you could duck next door to Slowdown where Minneapolis bluegrassers Pert Near Sandstone are touring their hard-charging string cacalvade. Locals Jack Hotel and Dirty River Ramblers will open. RSVP here.

The show, produced and written by members of the Red Theater collective, will feature about 30 original performance pieces of poetry, dance and music. The performances are bookended by an opening performance from This Machine Kill Vibes and a closing performance by Kamakauzzy and Yellow. The show starts at 7:15 p.m.

Red Theater is a theater collective founded in Lincoln that now has branches in Omaha, Chicago and Purchase, New York. Sure, the shows aren’t strictly what we usually think of as Nebraska music, but there’s a definite, if often under-recognized, overlap between this kind of theater and seeing a band at, say, Barley Street Tavern or Duffy’s.

It’s all performance art to some degree, though many bar-playing bands are probably less conscious of the fact in their own performances. If the live-music sector of performance art wants to push boundaries, it might be smart to take notes from people who have been more encouraged to play with the form for decades. If it doesn’t want that, well, it’s still going to be a good show.

“We have many social justice/awareness pieces expressed everywhere from the ridiculous and hilarious to heartwrenching and metaphorical,” Hand says.

Nik Fackler of Icky Blossoms is back in the director’s chair.

Late last month, Lineboil released a teaser for a film based on Matt Danner and Tony Millionaire’s book series about the classic children’s doll, the sock monkey. Danner’s script for the film is currently looking for a buyer. In the meantime, Fakler directs while Danner (The Looney Toons Show) handles animation direction.

Based on the teaser, the film looks like it could be equal parts Stuart Little-whimsy and Tim Burton-eerie. While this looks topically different from Sick Birds, that film certainly had its share of trippy animated sequences and the occasional dose of childlike cartoonism.

“Metroid’s Dungeon” features a verse by Chicago emcee Verbal Kent, who’s been recording and releasing music around Chicago since 1999. Check it out here.

It’s the fourth track released from Shamaniq, each with a different producer so far, but all tied together by Sleep Sinatra’s languid delivery and psychological framework.