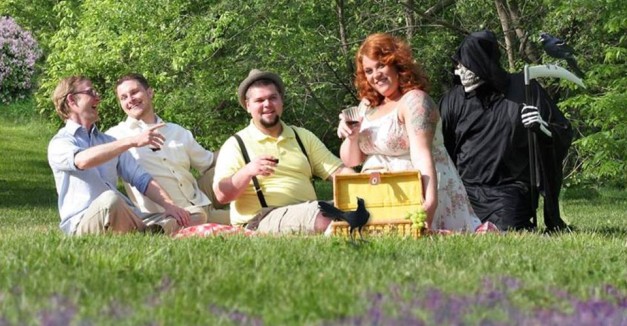 The Hear Nebraska programming team is already in the planning stages for the 2016 Good Living Tour. After hearing your feedback from 2015, we’re thirsty for more.

Specifically, we want to know which Nebraska towns you think should host a 2016 stop. Please help us by filling out this brief survey. Tell us why you think your choice is a good fit. We’ll need logistical assistance, such as local funding and organizer support, so we’ll want to know who to reach out to (Chamber of Commerce, community foundations, local businesses, etc) and how they can help. And most importantly, which bands do you think should play that particular town? Is there a local connection? Do you have a dream lineup in mind? This is your chance to let us know.

We want to make the 2016 Good Living Tour even better, and that includes gathering your input. Thank you in advance.

In 2007, Omaha musician Toby Wandel assembled a group to play riff heavy hard rock. When vocalist Kate Prokop enlisted, adding her dynamic, theatrical voice to the mix, Wandel had the beginnings of Through The Stone.

Eight years in the making, the Omaha hard rock band releases its self-titled debut LP tomorrow at The Waiting Room. The End In Red, Forever Endeavor and The Clincher Band fill out the bill (RSVP here).

The current lineup — comprising Wandel, Prokop, guitarist Tanner Ashland and drummer Wes Graffius — was finalized in 2013, after Graffius joined. The band had cut its first demo in 2012, but its coalescence set them on the path to Friday’s release, which was recorded this past winter with Jim Homan at ARC Studios.

Heavy riffs, searing solos and thunderous drum fills charge Through The Stone’s LP. Prokop spans the spectrum of her vocal range on single “Decisions, Decisions,” reaching deep into her booming voice and pulling out a vibratous upper-register howl.

In advance of the release, hear “Decisions, Decisions” below.

Before next week’s LP release, hear “See It Now” below.

Tonight is one of the busiest nights in shows in recent memory, with something going on at nearly every major venue in Lincoln and Omaha. Let’s get to the roundup.

Desaparecidos makes their return to The Waiting Room stage tonight, barely less than a year after performing there in late 2014. This time, they tour in support of June 23 Epitaph release Payola, the band’s first since 2002. Calling that record a “follow-up” seems silly. With each of its members busy with (sometimes multiple) other projects, it feels more like the timing was right to reconvene.

Either way, the Conor Oberst-led punk quintet is full-steam ahead in the wake of Payola, touring nationally and hitting a slew of festival stops, culminating in a headlining spot at late October preeminent punk extravaganza The Fest in Gainesville, Fla. Tonight, it will be joined by Calif. foursome Joyce Manor and hard-rocking St. Joseph, Mo. trio Radkey. There’s no telling whether or not this is the band’s last Omaha performance, making the show an especially attractive draw. RSVP here.

Tonight, John Darnielle of The Mountain Goats will play a solo show at Vega with Heather McEntire. The Mountain Goats released Beat The Champ April 7 on Merge Records. The 15th full-length album in the project’s 20-year existence, it concentrates on the professional wrestlers Darneille admired as a child, and tried to imagine their lives. RSVP to the show here.

Over at The Bourbon, footwork producer and former Nebraska resident Darren Keen returns to the good life with new record He’s Not Real in tow. Released Aug. 28 on Columbus, Ohio, label Orange Milk Records, the album is a foray into the footwork genre of electronic music. Yesterday, we published a Q&A with Keen — which you can read here — conducted by Omaha deejay Juan Chaparro aka Dojorok. Keen will perform on a billing with Giant Claw (Orange Milk boss Keith Rankin), Kansas City, Mo., bass producer Sigrah and Lincoln’s Beren One. RSVP to the show here.

Tonight, Lincoln’s Zoo Bar features a double-dip. The Gerardo Meza Band will entertain the early crowd at 6 p.m. Later, Iowa City indie rock band The Olympics plays with Omaha’s Twinsmith and Lincoln’s I Forgot To Love My Father. The show is a tour send-off for both Olympics and Twinsmith, including a few dates together. Twinsmith’s tour will take them through the beginning of November. RSVP to the 9 p.m. show here.