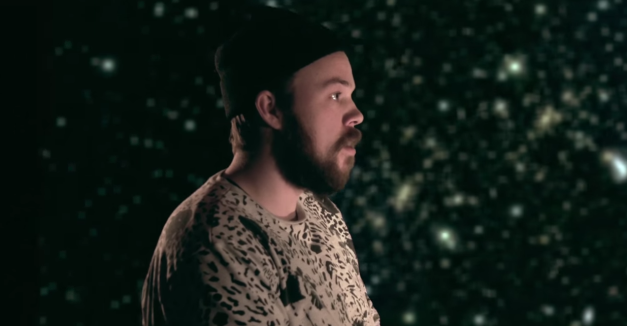 Sam Martin’s newest music video is a lot like its album source — in that Martin is the key factor.

The former Capgun Coup frontman shot, edited and directed the “I Like to Hide” music video, released by Make Believe Recordings yesterday. It’s from December’s A Notion in an Ocean. Check out our review of the album here and buy the record here.

That album feels like a work of Martin’s complete vision: never content to settle into one groove, rather it dabbles deftly in any pop genre it wants.

And so the video for “I Like to Hide” similarly never finds one mode in its brief 70 seconds. Instead, Martin’s playground melody is mashed together with an array of suggestive images and an apathetic journey through space. At one point, Martin’s face is morphing, but the effect is never visited again.

Check out the video below:

Lincoln Exposed kicks off tonight with shows at Duffy’s Tavern and The Zoo Bar. Tomorrow night, The Bourbon joins.

With the snow coming down, maybe it’s a blessing that tonight will be comparatively short and sweet. If you’re planning to park downtown tonight, Lincoln is putting a parking ban into effect at midnight. However, the parking garage at 12 and N will offer free parking.

Imaginary Girlfriend was originally slated to play The Zoo Bar, but cancelled. We’ll be out there tonight, so say “hello” if you see us.

A handful of Nebraska musicians are headed to South by Southwest in March, and that includes Aaron Jordan, Anniversaire frontman.

But Jordan won’t be in Austin for a round of shows. He’s going in support of The Grief of Others, one of the ten narrative feature films selected for the festival’s film showcase. The film features Anniversaire song “Southerly” and Jordan wrote the score.

The Grief of Others is based on a novel of the same name by Leah Hager Cohen. It follows a family trying to recover from a devastating tragedy. Rachel Dratch plays a major role in the film. Dratch is best known for her work in Saturday Night Live and a recurring role in 30 Rock.

SXSW’s film portion runs March 13-21. The music portion March 17-22. We’ll be down there to cover, let us know if you or your band are headed that way.