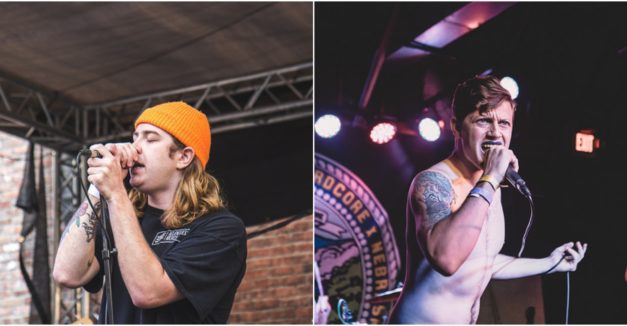 The daily office grind can sometimes feel like a repeating cycle: wake up, grab coffee, plow through the inbox, back to bed to do it again the next day. The latest video from Salt Creek peers into the life of someone stuck in a rut through the lens of their dull routine.

The Lincoln indie rock band released “Phase,” a darkly-tinged video accompanying the soaring final track from its debut EP Where Strangers Go, on Sunday. Directed by Carter Knopik, its expressive protagonist drifts through his days until his stifling becomes too much to endure. Stuck to the floor and locked into his local coffee shop (which you might recognize), he finally breaks out.

No Thanks rails against imperialism in new track

Omaha political punk band No Thanks has released a new single, “The Harvest,” also the first from its forthcoming full-length album The Trial. The song starts with a guitarist Mike Huber’s psychedelic chord strike and bassist Cam Stout’s grumbling groove. As it kicks up, vocalist Brendan Leahy rails against United States violence in South America, painting a bloody picture of foreign coups and economic warfare.

“The Harvest” is the first recorded music released by No Thanks since last year’s Position EP. Listen to the new track below.

The Bemis Center for Contemporary Arts has drafted a fellow community arts partner for its annual fundraiser on Friday, Oct 27.

In addition to this year’s Benefit Art Auction, which unites local and national artists with local patrons to raise money for the Center’s programming and mission, Maha Music Festival has curated an after-party concert with New York indie pop band Cults and Omaha electronic duo Closeness. The concert will take place at Bemis Center’s Okada Sculpture and Ceramics Facility, across the street from the main building at 723 S. 12th Street.

The art auction starts at 5:30 p.m., while doors for the after-party open at 9:30 p.m. Tickets are available now, offered for only the art auction or concert, or for entry to both. See details below and RSVP here.

In case you missed it last week, Lincoln chamber pop ensemble Floating Opera piled into the KZUM studio on Oct. 9 to play live for Hear Nebraska FM. We filmed their performance of “Nothing Feels Worse Than Your Good Times,” from the band’s 2009 album Pony Up A Go-Go. Plus, the entire audio — featuring a pair of tracks from January 2017 album Pop Song On The Elevator Down and an interview with the band on constructing its first album in eight years — is available for revisit.

Check it out the full session here. We will also play some of it tonight live on the KZUM airwaves; tune in from 8-10 p.m. to 89.3 FM KZUM or stream at kzum.org for two hours of Nebraska music.

Here’s a look at what’s going on in shows over the next couple of days. Plan your week with our statewide calendar here, and add your own here.