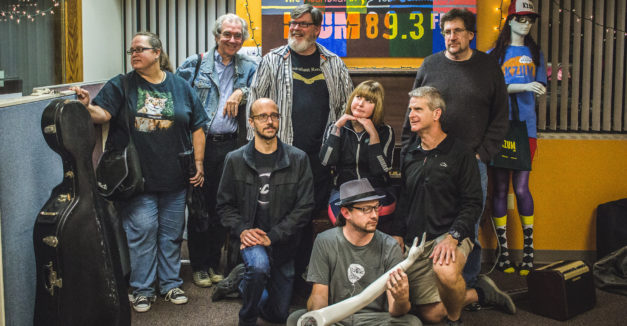 The following essay was read live on the air introducing Floating Opera’s live performance on Monday, Oct. 9, 2017. Find the session audio, interview and video of “Nothing Feels Worse Than Your Good Times” below.

Over the past few decades, Lincoln has been a sort of harbor to a fleet of quality songwriters, some coming and going from the Capitol City’s often temporary port and others popping in and out of visibility but never totally vacating. Floating Opera and its principal writer, UNL professor Richard Rebarber fall into the latter camp, turning up first in 1993 and enduring for the next 20-plus years with the assistance of an all-timer list of Lincoln musicians from notable bands like Mercy Rule, The Millions, For Against and Prairie Psycho. All the while, it stayed committed to churning out lush, piano-driven pop with a grand self-image and the heady lyricism to match.

This year, eight full trips around the sun from its 2009 album Pony Up A Go-Go, Floating Opera has injected an extra dose of theatricality into its latest full-length, Pop Song On The Elevator Down. Fitting glove-like with the adult-alternative-oriented Tremulant Records roster, the January release bears the ensemble’s full-steam, Brit-pop inspired sound and adds orchestral weight. Violin and cello introduce themselves immediately with Bond-flick-ready album opener “Meantime,” and give otherworldly depth to the band’s joyful “Debaser” cover. Songs like “Calling Card” and “Infomercial” play right up Floating Opera’s alley, with all the tightness and precision one can expect from its mathematically-inclined frontman. It adds up to another sparkling and complex effort from one of the longest tenured acts in the state.

Listen up, here’s Floating Opera with “Starships on the TV.”