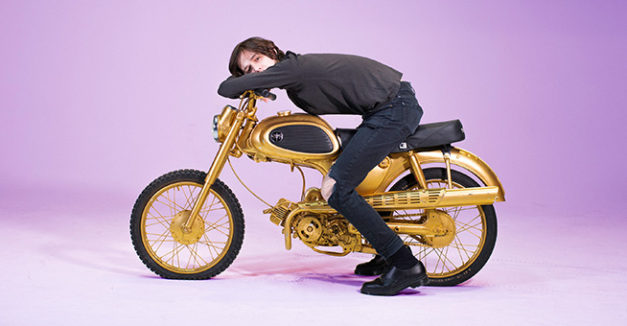 Saddle Creek Records has broken out the ink, signing its second new act of 2016.

The dreamy, beachy track will appear on Evian’s debut LP Premium later this year. Recorded in just a few days at Brooklyn’s Figure 8 Studios — where Evian is a resident engineer and producer — it features “glowing lead guitar, aching pedal steel, Wurlitzer keys and iconic 20th-century synths [which] coalesce over a sublime, supportive rhythm section,” according to the press release.

Watch “Sleep Easy” below, and pre-order the 7-inch vinyl here.

As it progresses towards its lofty fundraising goals, KZUM has kicked off its summer drive.

The nonprofit community radio station’s Soundbacker’s Drive starts today at 1 p.m., aiming to raise $30,000 over the next week. The Lincoln station is halfway to its $300,000 mark, which it must meet by September 30 in order to sustain eligibility for government funding.

KZUM general manager Kerry Semrad says her recent hire has freed up the rest of the station’s small staff to focus on community connections and expanding its offerings, which include education and live concert programming.

“We have all the manpower that we need to do all the amazing stuff we want to do,” Semrad says.

While the bulk of the Lincoln station’s financial support traditionally comes from private donors, funding from the Corporation for Public Broadcasting comprises roughly 25-percent of its budget. Without that funding, KZUM risks stagnation.

“We do not want to simply exist, Semrad says. “We want to be able to grow with Lincoln and the community.”

In 2013, the CPB instituted new regulations for its fund matching program, most notably the minimum requirements its member stations must meet in order to qualify. The $300,000 mark is this year’s minimum, and would be a KZUM fundraising record.

All week, KZUM’s volunteer programmers will ask listeners to become Soundbackers, and as always, there are gifts up for grabs for those who pledge their support. To donate, call the station directly at 402-474-5086, or go online to KZUM.org.

(Quick note: I’ll be back in the studio Monday, 8-10 p.m., after a three-week hiatus from Hear Nebraska FM. If you feel so inclined, call and pledge your support then, or donate in our program’s name online. It is because of it’s listener support that KZUM continues to exist.)

I write from the beautiful Golden Husk theater in downtown Ord, Nebraska. It’s quiet now, the geometric shaping decorations on its corn husk walls muffling the sounds of work. But in roughly a month from now, The Good Life, CJ Mills, Vegetable Deluxe and DJ Tyrone Storm will play for an all-ages crowd (July 21, RSVP here). It’s the only (planned) indoor show of the tour, but I’m not sweating it:

Here’s a quick rundown of what’s going on this weekend:

No Thanks tape release Friday at Milk Run – Omaha’s self-proclaimed “spookiest political punk act” releases Position on tape tonight at Milk Run, 1907 Leavenworth St. It’ll be joined by Lincoln garage rock trio Bien Fang and Omaha stoner/doom metal band Super Moon. No Thanks has risen quickly amid the Omaha DIY scene, no doubt due in part to its live antics and staunch political message. The show is at 9:30 p.m., but you’ll wanna get there early for free pizza and root beer. RSVP here.

(Full disclosure: we can’t help but be pumped, because HN intern Mike Huber is No Thanks’ guitarist. Even so, thought you should know).

For the rest of this weekend’s slate, head to our statewide event calendar here. If you do not see your show or one you plan to attend, leave it in the comments or add it using our Contribute feature here.

Musicians/bands: have news to share? Maybe an upcoming tour, new release or other info? Email us at news@hearnebraska.org.