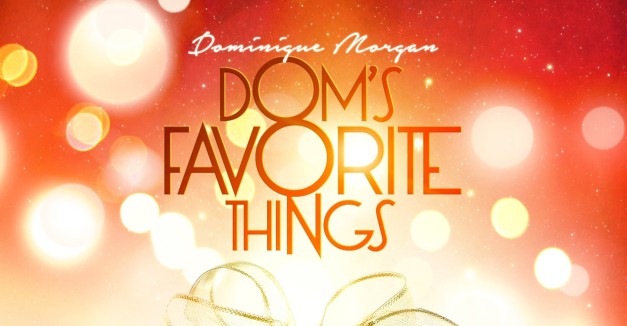 From the first strain of “Silent Night,” any one of the million or so people who’ve heard Boyz II Men’s classic Christmas Interpretations album might actually think they were listening to Nathan, Michael and Wanya, right until you missed the powerful bass of Shawn Stockman’s voice and instead hear the woosh of a car speeding along. The raw intro — recorded a capella outside of Dominique Morgan’s North Omaha childhood home, is one of two songs that you will instantly recognize — and that is entirely on purpose.

Morgan lost his father the day after Thanksgiving in 2002 and, seven years later, lost his mother December 21st. With the loss of both parents, Morgan found himself the guardian of his little sister, putting up the Christmas tree year after year, coasting through the holidays, a ghost of someone who felt like celebrating much of anything.

Here, six years later, he’s challenged himself to be present in the holiday season. Morgan tried to find something that would help him reconnect to the holidays in the Christmas music he was hearing, and he couldn’t. Exasperated, he realized he was going to have to write that music for himself. Thus, Dom’s Favorite Things was borne.

The EP starts with “Say Yes (To Christmas)” featuring and written with jazz musician Todd Campbell. The theme of reveling in the holiday is set up like a thesis paragraph. “Your walls are up, you’re going through change after change, and on the news the world is in pain. But even through it all, you’ve got to hold on. See, the sun is shining outside, the birds are chirping, too. Somebody moved your snow away, they left a note for you. The mailman smiled and sent some love, your world is filled with good. Say yes […] to Christmas.” While it’s easy to get caught up in the economy of the holidays, Morgan spends the body of Dom’s Favorite Things focusing on the importance of being with and being good to one another. He does this with his lyrics as well as with the audible presence of collaborations. Jus.B brings his gentle tenor to “Home for the Holidays.” J. Longoria and N’talia Shenelle bring pop vibes to “We Are Family.”

The EP’s stand-out track, though, is “Miss You Most at Christmas Time.” While easily mistaken as a heartsick reflection on a lover lost, the song is actually an ode to Morgan’s parents, “I wish you were under the tree, the only gift I’ll ever need.”

This Friday, December 4th, you can celebrate the release of Dom’s Favorite Things, at The Down Under (formerly the Side Door) in Omaha at 8 pm. The show is free and dinner is provided. Joining Morgan will be a slew of musicians and spoken word artists.

Live at O’Leaver’s continued its steady stream of releases last night, adding performances by Omaha garage rock band Eric In Outerspace, Lincoln rockers Powers and Brooklyn surf duo Crushed Out. Check them out at Liveatoleavers.com, and listen in below:

Jazz/fusion combo Velveteen will take the White Rabbit stage tonight as usual, and for the month of December, the Lincoln’s lounge is getting another dose of regular music entertainment.

Singer/songwriter Sas Liska (performing as SAS) plays the first of a three-night December residency tomorrow night. She plans to play mellowed versions of original songs — including from her recently released Rarities EP — classic folk covers and she is working on creating thematic shows each night. Liska says she’s also planning for a few guest Lincoln musicians to join her.

Tonight, English Beat will play to a sold-out The Waiting Room with The Interrupters. Known in their home country simply as “The Beat,” the Birmingham ska revival band released Here We Go Love this year, its first studio album in more than 30 years. The band was highly active in the late ‘70s and early ‘80s, mixing the 2 Tone ska sound with themes of unity and sociopolitics. RSVP here.

Also in Omaha, Anna McClellan returns to O’Leaver’s after a two-week tour to play with Miniature Horse and Razors. We published an artist profile video interview with McClellan yesterday, in which she talks about creating as a solo artist and reuniting with her former Howard band mates (watch it here). RSVP to the show here.