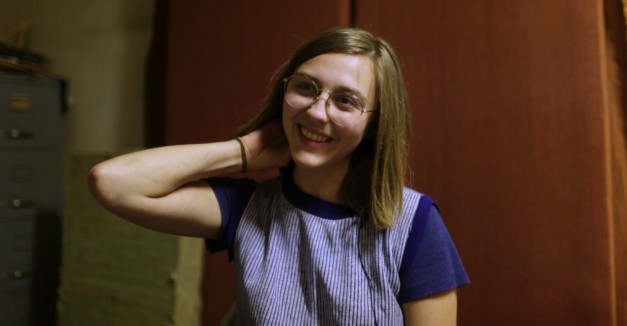 Hitting the creative reset button can be taxing, but sometimes it yields the best results. For Anna McClellan, it has rearranged her musical endeavor into what feels like a best fit.

In our latest profile, the pianist/songwriter told us about her modest beginnings in an Omaha basement, where she met former Howard bandmates Corey McDaniel and Daniel Ellis. After a few years’ run, a full-length album and a subsequent breakup — citing creative conflicts — McClellan embarked on what she describes as a four month road trip which she tried somewhat unsuccessfully to turn into a tour. She acknowledges difficulties were due in part to her inexperience.

Having landed in New York, she now has plenty of reason for optimism. Her debut full-length album Fire Flames released in October on Portland-based tape label Majestic Litter. When she kicked off the supporting tour two weeks ago at Zoo Bar, her former bandmates flanked her onstage. McClellan says their chemistry feels better than ever, though she admits it’s because she possesses the creative control, rather than trying to share it equally. Still, it’s produced positive results.

“I think I also realized after trying to play with other people that there is something special amongst the three of us,” McClellan says.

The trio returns to Omaha from tour tomorrow night to play O’Leaver’s (RSVP here). We caught up with McClellan before the Zoo Bar show to talk about her reunification with McDaniel and Ellis and giving tour another shot.