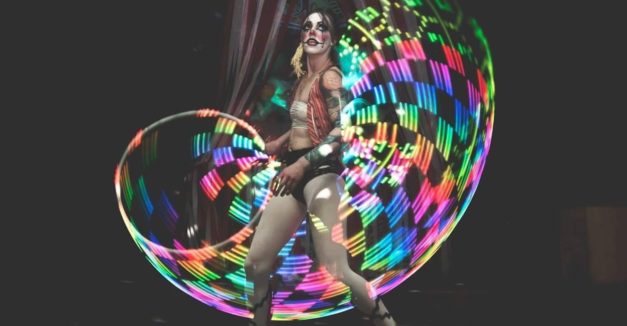 In February last year, REVEL paid homage to one of Omaha’s most tenured queer spaces by celebrating its second anniversary at now-shuttered Door 19, at 19th and Leavenworth. Before that, it had been Connections for more than 20 years. When Door 19 closed, it sat vacant. For one night, REVEL turned it into a pop-up party.

“[Connections is an] historic place for queer women,” co-founder Danielle Powell says. “We wanted to give people an opportunity to say one last goodbye.”

When REVEL, Omaha’s regular lesbian-dedicated social night, launched in early 2014, it was because its co-founders saw a need within their community for a place to socialize, dance and engage with local musicians, artists and performers. As it celebrates its third anniversary tonight at Slowdown, the event is still going strong.

“I think it’s definitely affirming,” says co-founder Danielle Powell. “It was a big leap of faith to start in the first place so it’s just affirming to observe a need and work your butt off to provide an answer and have people respond to it.”

That void came in the wake of Door 19’s closing, and since then REVEL has searched for a regular home. House of Loom hosted the inaugural REVEL in February 2014. Powell says the now-defunct venue’s zero-harassment policy aligned with their intentions to create a safe space.

“Having friends in that community, it was known as a welcoming space to all people,” Powell says.

Powell and Hahn have worked since REVEL’s inception to make it as much of a social environment as a danceable one. They have maintained a cocktail hour to start each event, Powell says, in order to invite dialogue and conversation in an friendly environment.

REVEL has also strived to connect within the Omaha community. Powell and Hahn continue to develop and rotate themes for the dance parties themselves, celebrating queer culture and featuring local artists and musicians. REVEL often donates proceeds from the events to community organizations, and in the past it has benefitted Heartland Pride and the Women’s Center for Advancement. They pitched in with a nationwide effort to support the Orlando queer community after the Pulse nightclub shooting in June last year.

In recent months, Powell says she and Hahn have worked to make REVEL more relevant to the non-party scene. They have noticed a regular demographic of attendees within their 20s, wanting to include both younger older audiences.

“We owe everything to the older lesbian and queer women in regards to the everyday rights that we now have,” Powell says. “It would be a huge oversight to not include that population.”

She continued, explaining that when she moved to Omaha, she saw no dedicated space for queer people ages 18-21.

“Being a queer individual and knowing that demo is vulnerable, we really wanna provide a positive atmosphere for that group, where they can be around their older peers and feel included.”

With Loom’s closing at the end of 2016 and that of Old Dundee — one of the few spaces Powell personally considered safe — Powell says Omaha’s queer community stands at a crossroads. She and Hahn have had a tougher time finding a regular space for REVEL because they are unwilling to compromise the safety of an already marginalized group.

Still, her confidence lies within the strength and resilience of the queer community.

“I really feel like we’re at a turning point in Omaha where we’re gonna see a big increase in pop up parties geared toward these demographics, or we’ll see some kind of space come out of this void and thrive,” Powell says.

Winter weather has reared its frigid head, but don’t let that stop you from escaping the clutches of your warm abode to find one of the many great shows going on this weekend. We’ve given a few below, but check out a fuller listing in our statewide calendar here. Leave the ones we’ve missed in the comments or email us at news@hearnebraska.org.

Tonight, Lincoln indie rock band Walk By Sea releases its debut full-length album at a show at Duffy’s Tavern [Full disclosure: guitarist/vocalist Zach Visconti is an HN intern]. The quartet has developed over the last few years, releasing two EPs and going on the road for a brief stint late last year. It joined Hear Nebraska FM live in the KZUM studio in December to play a few tracks from the new album; listen here. The new album’s title will be revealed tonight at the show. Better Friend and See Through Dresses play in support. 9 p.m. show, $5, 21-plus, RSVP here.

Tomorrow, Against Me! returns to Omaha to play Slowdown with Mobina Galore and Typesetter. The Gainesville, Fla., native band, fronted by Laura Jane Grace, released its seventh studio album Shape Shift With Me last September 16. According to Grace, it is an album about relationships from a trans perspective; where Transgender Dysphoria Blues was about her transition, this album focuses on what happens next. “Trans people should be able to fall in love and sing love songs too, and have that be just as valid,” she said in a recent EW interview. Doors at 8 p.m., main room show, $18 advance/$20 day-of, RSVP here.

And in Lincoln, rapper Scru Face Jean plays for the home crowd at Vega. It’s his first local show since returning from Nigeria, where he mingled with fellow rapper and native Vector. They planned Scru’s return, but in the meantime, he’s dropped his latest full-length, Trillenial, and embarked on his third headlining tour. Read about it in our recent Q&A here. 7 pm show, all-ages, $10 advance/$12 day-of, RSVP here.