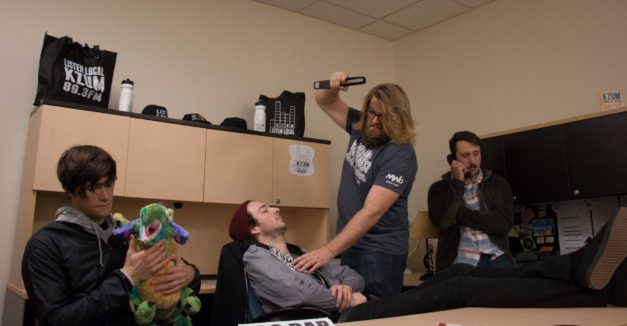 [The following was read live on the air Monday, Dec 5, 2016 before Walk By Sea’s in-studio performance at KZUM. Hear their four-song set and watch a video of “Funeral” below. The Lincoln band’s yet-untitled debut LP comes out Friday, Feb 24 at a Duffy’s Tavern show featuring See Through Dresses and Better Friend.]

From its folk-based beginnings to its more recent, edgier indie-rock streak, Walk By Sea has always maintained an air of earnestness grounded in the imagery of its midwestern origins. It’s there in one of its first tracks, the colorful “Fall” from 2014 Ep Until The End — which plays as comfortably as the Home on an early Ben Gibbard acoustic track — and it’s in newer, more muscular tracks like “Joshua” or “Drummer Boy,” which try to find the home within oneself.

And it’s important I note the EP on which those tracks live, the album that ushered in a looser, more energetic sound that’s led to Walk By Sea’s arrival, so-to-speak. Throughout 2015’s As The Night, you hear a band still trying to find its footing, but one that has at least one hand and two eyes on potential landing spots. You can feel the distinct emotional unburdening as vocalists Jacob Ignagni and Zachary Visconti shed emotional baggage like overworked bellhops. The rhythm section of Brandon Ramos and Kade Clark is busy, always keeping things both interesting and moving forward.

In the year since, Walk By Sea has drawn spots on local festival lineups and embarked on its first out-of-state tour this past October, its live shows bursting with emotion. The foursome now turns to bigger things, entering the studio this past November to begin work on its first full-length LP. We’ll get a taste of its ever-evolving dynamics tonight, and can expect more in the months to come.

So, without further ado, here’s Walk By Sea with “Moratorium”