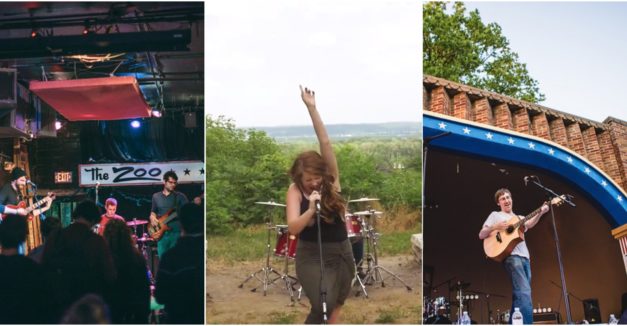 Sometimes finding a new band can feel a little like being set up on a blind date. You have your common interests, first impressions and if all things go well― the means to meet again. Part of the fun for us at Hear Nebraska is to act as the matchmaker in these situations, but sometimes we ourselves are introduced to new artists in the process. This week’s Hear Lincoln headliner, Mobius, was admittedly a new name to this writer, but the three-piece instrumental group has been performing since 2012. Its members came together through previous projects and classes together at the university’s college of music.

The band took some time to chat with HN in a brief “how do you do” before playing Hear Lincoln this Friday, Aug. 18 at the Lincoln Community Foundation Tower Square (RSVP here). Read on for more.

Hear Nebraska: How did Mobius come together as a project?

Mobius: Cam and Mitch began writing music together from an offshoot of a previous band. Soon afterwards, Mitch met Steve at UNL’s School of Music. Since then, we’ve had nothing better to do on the weekends.

HN: Who are some artists that have been a major musical influences for Möbius?

M: A lot of Jazz and Classical music (including professors from the university) as well as artists like 311, Incubus, Benny Greb’s Moving Parts, Toe, Joe Pass and Joe Dart.

HN: I see you have quite a collection of demo music on your SoundCloud. What would you say is a running theme throughout your music and are there any future plans for an EP?

M: We fill in the absence of a vocalist with extended/altered harmonies and melodic contour. Deceptive and Half Cadences are the cat’s pajamas. Dynamic contrast is the backbone of our phrasing and form. We have plans to record an EP in studio in the near future; hopefully before the end of the year.

HN: How has your music evolved since beginning in 2012?

M: Our music shifted from writing with a vocalist in mind to focusing entirely on instrumental so we’re always looking for new ways to reinvent our sound as well as our older pieces. This shift redirected our focus to include more Jazz Harmony and Classical Theory but with a more contemporary sound.

HN: What would you say is your favorite part about the Lincoln music community?

M: There is a wide array of different genres and styles of music from the groups in Lincoln. It’s great to see so many people involved in music and loving what they do.

Taking The Hourglass embraces the present in ‘Until The End’ video

True to their name, Omaha hard rock band Taking The Hourglass acknowledge their limited existence and tighten their grasp on today without regrets in the new video for “Until The End.”

The video opens with vocalist Rachel Curtin walking through a tattered field toward a rotary phone lying in the dirt. She puts the headset to her ear and hears her own voice singing through over building acoustic guitars and strings. She then discovers a rope stemming from the back of the phone, which leads her through untouched forests, up mountains and across a sprawling river.

Through her journey, Curtin blasts lyrics lamenting the life’s brevity and whether she’s been wasting her time. But by the end of the video, she seems to answer the question herself when she meets the end of the rope and is led to the rest of her band at the top of a cliff thrashing to the song.

Curtin grabs a microphone, which stands in the center of her bandmates, triumphantly raises her hand to the sky and sings the song’s hook one more time.

“Until The End” comes from the band’s debut EP Lost for Words, which dropped in 2014. Since the band formed, founding members Curtin and guitarist Ilseuk Masuda got married and weathered moves from Omaha to Columbus, Ohio, and back. Now, with a five-piece lineup, Taking The Hourglass are gearing up to record their sophomore EP.

Check out the video for “Until The End” below, and catch the band’s acoustic set opening for Spence at Slowdown on Sept. 27. RSVP here.

Twinsmith are wasting little time returning to the road after touring with LA pop-rock band Rooney in June.

The Omaha indie pop band announced today its “Never Stop Partying” tour, which kicks off at Lincoln Calling and sees the band hitting the East Coast cities like Washington, Philadelphia and New York over a two-week span. Check out the full tour dates below.

Twinsmith dropped its third studio album, Stay Cool, last month, a record that stripped back the band’s in-your-face bliss on 2015’s Alligator Years to a relaxed mood that stays true to the album’s title. Hear our On The Record podcasters’ takes on Stay Cool here.

Lincoln English teacher turned singer-songwriter Daniel Christian is back with his first new set of tunes since 2013’s Speak LP. In late July, Christian dropped Coffee, the first of a pair of new EP’s planned for release before the end of the year.

The album finds Christian and his band roaring through seven tracks of power pop that sounds like what might unfold if Tom Petty and Ben Folds were locked in the same room. Coffee specializes in big hooks, building from pop chord progressions in the verses and erupting with sparkplug guitar leads and soaring solos. And the record leaves room for a ballad, too, with the Matthew Sweet-esque “You Don’t Know Her,” where Christian harmonizes with himself over breezy acoustic guitars.

Have a listen to Coffee below, and keep an eye out for the second of Christian’s 2017 EP’s, which is set for a fall release.

Take a break from the work week’s stresses by checking out a show. Have a look at our picks below, and find a fuller list of concerts over at our events page. If there’s a show missing, add it using our contribute feature here.

City and Colour with Marlon Williams at Slowdown – Dallas Green, aka City and Colour, dropped his fifth studio album If I Should Go Before You back in 2015, and the Alexisonfire frontman is on the road again supporting the record. He stops in Omaha tonight with New Zealand alt-country singer-songwriter Marlon Williams. Look out for photos of this show in Friday’s news column. 8 p.m. All ages. RSVP to the sold-out show here.

Wabakinoset with Möbius and Pure Brown (trio) at Duffy’s Tavern – Denver’s Wabakinoset makes its way to Lincoln tonight to perform their brand of improvised dance rock at Duffy’s. The band has a sprawling Bandcamp catalog, with numerous live performances recorded and uploaded to the site. Watch them as they jam, create and record their set on the spot. Lincoln rock band Möbius and Nintendocore band Pure Brown open the show. 9:30 p.m. $5. 21+. RSVP here.