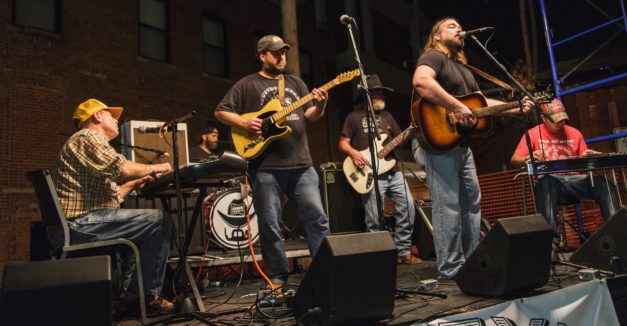 Country music is soaked with what can be called the “last call” narrative, bar close stories of heartbreak, family, and longing. Lincoln honky-tonk band The Hangin’ Cowboys channel the classic sound from predecessors Willie Nelson, Merle Haggard and Waylon Jennings to spotlight retellings of modern Nebraskan character in its 2016 release Happy Hour.

“We quickly realized we could order the songs in such a way as to tell a cohesive story”, guitarist Jeff Scnittker says. “[It’s] a journey through life as seen through several hundred happy hours,” vocalist Shaun Sparks adds.

With plans to begin their second album at the end of July and while preparing to headline Hear Grand Island this Friday, July 21 (RSVP here), the members of The Hangin’ Cowboys took some time out of their busy schedule to chat with Hear Nebraska about the storytelling methods they’ve explored.

Hear Nebraska: I find that cowboys are often paired with hero imagery, and so the picture you paint with the name The Hangin’ Cowboys is a complex but interesting one. How would you say this imagery works to identify the group?

Shaun Sparks: There is a little bit of lore to our name but I don’t want to give it away. As a fan of the band before becoming a part of it, I always associated the cowboy imagery with the foundation of the group’s sound, which is classic country western, regardless of how we like to stylistically stray from song to song.

Jeff Schnittker: The cowboy imagery really provides a nice landscape to construct our songs and provides something of a template without fencing us in as songwriters.

HN: You’ve mentioned that the band’s music is heavily influenced by musicians such as Willie Nelson and Merle Haggard. What it is about their style of country that draws you to it?

SS: Well, those guys all have a classic sound that we really love, and we like to draw on them as influences, using that influence as building blocks when we write our original songs. It keeps us grounded when we have our head in the clouds rocking out!

JS: The honest answer is because I love their music. I listen to Willie and Merle on a daily basis.  Willie is a combination of the greatest songwriter and the guitar stylings of Django Reinhardt.  I love Merle’s honesty, both lyrically and musically. Merle’s guitarist Roy Nichols has been a personal favorite of mine.

HN: Your album, Happy Hour is very honest in autobiographical detail. With it composed collaboratively, how were songs conceptualized between the five of you and how did they evolve?

SS: When I joined the group, the dudes already had been gigging for some time with a different vocalist. I was a fan! So when we started jamming together I was just enjoying learning the songs that were already there. Once I had been around for a little while we started putting a few of mine in the rotation. Nowadays when one of us writes a song we just “woodshed” it together as a band. Specifically to your question though, the songs on Happy Hour were individually conceived but conceptually arranged on the album to feel like a story, a journey through life as seen through several hundred Happy Hours.

JS: We do have three songwriters in the band.  That provides a good variety of perspectives.  While the three songwriters have a wide variety of influences, we all understand what works within the context of The Hangin’ Cowboys and we all like trying something new.  We didn’t intentionally set out to make Happy Hour a concept record but we quickly realized we could order the songs in such a way as to tell a cohesive story.  It was something of surprise to us that the songs worked so well together.  That said, we really liked the surprise and we are going to try for that cohesive feel again when we record our next album at the end of the month.

HN: “Cass County” is a song on the album that sticks out to me in terms content. How does the jail-stay-tale fit in with the rest of the compilation?

Russ Eikerman: It is vaguely based on stories of people my parents knew and talked about. There may be some domestic troubles, maybe some financial struggles. But in the end it was real life for me growing up. I think it fits with the rest of the album because we all write about real life. This album came together in such a way that it was just another part of the story.

SS: Music is universal to all of us, and here in Nebraska we are fortunate to have such a robust music community. I think that the fact that the best local artists I know create original music is why we can have nice things, such as all of the big local music events like Hear Grand Island, events that bring a lot of people together to experience different groups they might not normally seek out on the typical weekend.

JS: I am first and foremost, a rabid music fan. I need music like I need air and water. Local, original music provides a really great service to the community. Specifically, I think the “live show” is really the product we as musicians provide.  The live show provides not only music, but a chance to engage with your community in a unique way.

Broom Closet Beats is the Lincoln beatmaker’s first tape with Dreamscape and his second project as part of the collective, after last year’s collaboration EP with Sleep Sinatra, Sleep Meets The Phantom. The new mixtape couples Janitor’s sample-based, Madlib-inspired production with boom bap rhythms that sound like they could fit on a number of Stones Throw Records albums from the early-2000s.

The tape glides from moody tracks like “It’s Just Another Dream,” which samples a man as he describes his loneliness, to more cheerful cuts like the ensuing “It’s The Truth,” as the same man finds happiness in music. And the entire tape is held together with the constant “You’re listening to Phantom Janitor” sample that repeats on nearly every track and sounds like an automated message coming from the cockpit of an airplane.

Have a listen to Broom Closet Beats Vol. 1 here.

Also on the Dreamscape front, the collective is hosting its “redux” edition of its GOODGOSPEL show series on the rooftop of Black Circle Records after the first event got rained out in June. RSVP to the show here.

Whipkey wrote Driver through his experiences as an Uber and Lyft driver, supposedly meeting a variety new people with interesting stories and then and putting their stories to a melody. “Amy Knows,” the first song Whipkey wrote for the album, details the story of Amy, a woman who Whipkey picked up from Omaha’s Amtrak station. And “North of Center” follows a blind woman named Rebecca and her drive-time music discussions with Whipkey. Both tracks are built around Whipkey’s Americana-style storytelling and folk harmonies.

The two tracks are free to stream here, where you can also contribute to Whipkey’s project by pre-ordering the vinyl LP of Driver and a digital download of Best New Music.

We have to wonder how many times Conor Oberst has been asked which Saddle Creek albums are his favorite since its mid-2000s heyday.

At any rate, BrooklynVegan ran a story on Monday quizzing Oberst, Big Thief’s Adrianne Lenker and Hop Along’s Frances Quinlan about which of the Omaha indie label’s records they think are the best. The trio — all of whom, of course, have released records on Saddle Creek — go in depth describing their memories of their respective picks. They run the gamut from Ted Stevens and Mayday’s Bushido Karaoke days to Bright Eyes itself (Lenker’s pick, about which she says it was “one of my first encounters with music that made space and gave permission to feel and honor my own chaotic, guttural yearning”).

Saddle Creek has struck it relatively big in last couple years, adding to its lore with critically acclaimed albums from Big Thief in 2016 and 2017 and Hop Along’s Painted Shut in 2015. The label has also seen the seven-year return of Land Of Talk in 2017 and perhaps Omaha indei rock band Twinsmith’s most mature record to date.

Check out the trio of picks and Oberst’s upcoming tour dates with The Felice Brothers in the article here.

Get over that mid-week hump with a show or two, and check out our show picks below. Head over to hearnebraska.org/events for a more comprehensive list, and add your own with the contribute feature here.

Follow us on Twitter and Instagram for the latest updates, concert stories and more. Email us with your questions, criticisms, news tips and story ideas as news@hearnebraska.org.