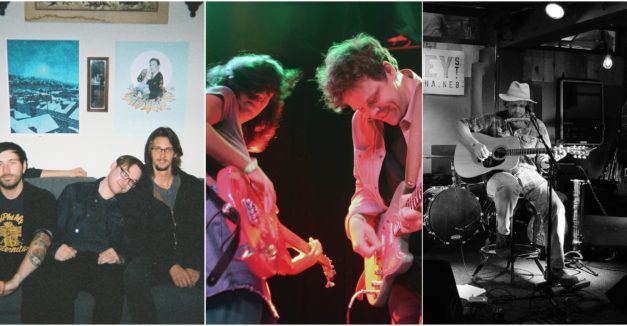 In the midst of a personal slump, there’s a directionless feeling. The next steps are shrouded in darkness. Words don’t come out right or don’t come at all. For Centerpiece’s Will Conner, there’s still a chance for light.

The five-piece Omaha indie rock band explores this in new track “Shadow and Shade,” which premieres today via HN. It is the second single from the band’s forthcoming self-titled EP, out May 5.

With his new project, Conner (formerly of No Tide) brings the same poppy vigor with a new cast of players. Paul Knapp’s (Bed Rest) guitar work sparkles and is complemented by keyboard player Jay Nesmith. Drummer David McInnis (Timecat, Idlefox) and bassist Jon Ochsner (All Young Girls Are Machine Guns, Those Far Out Arrows) round out the crew, which will play a pair of release shows in Illinois and at Omaha’s Reverb Lounge June 2 & 3.

Listen to “Shadow and Shade” below and pre-order Centerpiece here.

In new music, a pair of Nebraska bands have seen national single premieres over the last couple days.

First up, Umm, the new project by Nebraska natives Stefani Drootin and Chris Senseney, debut “Black Summer” via Interview magazine. The song carries over the fuzzy guitars and enchanting harmonies prevalent in their other band, Big Harp. Its dark subject matter, echoed in the eerie keys that build toward the song’s end, focuses on mortality and “death as a destination” of life, as Senseney put it to Interview.

We heard this track and B-side “Oh Yes No” when the duo returned to Omaha last week, playing a set at Reverb Lounge with BareBear and Oquoa. See photos and read the review here. Listen to both new Umm tracks below.

And just today, See Through Dresses shared the first single, “Violet,” from its forthcoming album Horse of the Other World, with Stereogum. Shimmering and jagged, the track signals a sonic change for the band toward a bigger, more orchestrated sound. Synths are prominent, played here by Sara Bertuldo, and even Matthew Carroll’s voice, set back in the mix, is dripping with reverb.

Listen here. Horse of the Other World is out June 30 on Tiny Engines. Catch See Through Dresses on tour with Charly Bliss (and a handful of other spare dates; see them below).

Speaking of touring, Omaha Americana singer/songwriter Matt Cox will head out on an east coast/midwest trip next week, starting April 23 at Des Moines Social Club. He’ll head through eight states before returning for in-state shows May 13 and 19. See full dates below.

Cox released his fifth studio album The Cost of Everything And The Value of Nothing last summer, when we spoke with him about navigating a turbulent time in his life and finding creativity in serenity. Read the interview here.

Nebraska musicians: heading out on tour? We’d love to share. Email us at news@hearnebraska.org.

Downtown Boys takes the place of Surfer Blood, which Maha announced was forced to drop due to a conflict.

The ninth-annual festival happens Saturday, Aug 19 at its Stinson Park home. Headliners include Run The Jewels, The Faint and Belle & Sebastian. Check the full lineup and buy tickets here.

HN contributor Dean Birkheimer went to Lookout Lounge last night for Chicago-native Celtic punks Flatfoot 56. The band has been at it for nearly two decades now, propelled to national notoriety with its first to LPs Knuckles Up and Jungle of the Midwest Sea in 2006 and 2007 respectively. Lincoln celtic punk band The Flasks joined Omaha street punks The Bricks and punk rock band Tiananmen Squares to open the show.

Here are a few picks for the next couple of days. Find a fuller listing on our statewide calendar here and email what we missed to news@hearnebraska.org. Let’s get to it.

Tribute to Mike Kronschnabel at The Waiting Room – The Nebraska music community lost one of its foremost historians this past January when Mike “Kronch” Kronschnabel passed away. Kronch founded Trout Tunes, a weekly television show that featured interviews and live performances with Nebraska bands and ones who toured through. A few of his friends were kind enough to share memories in a feature we published Jan 24; read them here. Performers include Anonymous American, Brad Hoshaw, Janglepop, Wakanda One, Bill Arab and Michael Campbell (doing the songs of Kronch), Pat Gehrman, Jason Birnstihl and Korey Anderson. 7:30 p.m. show, $8, RSVP here.

Sundara Karma, Twinsmith at Slowdown – UK indie rock band Sundara Karma comes to Omaha on the heels of its debut album Youth Is Only Ever Fun In Retrospect, out January 6. Their magnetic live performance and lush sound have drawn praise; DIY named them “Breakthrough Band of the Year” of 2016, NME declared them a “Best New Band of 2017,” and they are currently on the cover of Dork Magazine. Omaha’s Twinsmith opens the show, the first of its impending tour. 8 p.m., $12, RSVP here.

Stormfest 2017 at Lookout Lounge – Three nights of hard rocking music starts tomorrow night. It promises to get progressively harder thoughtout the weekend: Thursday night features a punk and rock ‘n’ roll style lineup; Friday will consist of more death and heavier metal bands; Saturday’s lineup is full of a mix of everything from sludge to hardcore to metal. 6 p.m. shows, all-ages, RSVP here.