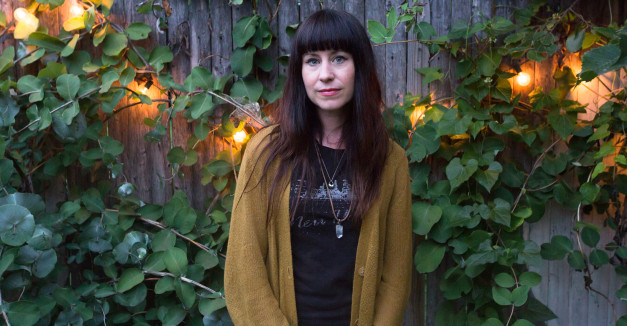 The four-minute segment is a broad primer on the process around Fink’s August release, Blue Dream, on Saddle Creek Records. She discusses the dreams she had been having for a year that ultimately led to the album’s penning as well as the tight interweaving of love and death on the record.

The video is intercut with selections from Blue Dream like “Ace of Cups” and “Holy, Holy” and music video footage, including a shot from Love Drunk Studio’s ambient backyard session with Fink.

Omaha’s urban art scene clearly made an impression on one high-profile artist who worked there this past summer.

Tonight, The New BLK Gallery opens a Cey Adams exhibit of work inspired by visual artist’s time as a resident at Bemis Center for Contemporary Art.

During his time in Omaha, Adams teamed up with local artists Dereck Higgins, Ben Jones, Aaryon Williams and Olivia Groth to create a mural at North Omaha’s Carver Bank, which was unveiled in October.

“Brand New,” Adams’ show, opens tonight from 7-11 p.m. with gratis beer and spirits from local distillery Brickway. Mean Street performs at 10 p.m. The show is available by appointment from Dec. 15 to Jan. 15.

Kim Reid Kuhn of The Sweatshop Gallery curated the show.

Check out this preview video by The New BLK for an aesthetic taste of what’s in store:

Objectif 49 is giving any male Omaha musicians who want to pursue acting a chance.

The Omaha-based production company has begun work on its second feature film, Amplifier, an independent movie set and shot in Omaha. They’re looking to cast a 20-something male who can proficiently sing and play guitar.

The film, pitched as a comedy-drama directed by Jim Fields, will follow a young woman’s efforts to find success in the Omaha music scene. And because narrative-based works all rely on some sort of conflict, the main character, Kayla, will inevitably face challenges to her goals.

Hard to say exactly what the auditioning role will entail, but maybe it’s the main antagonist whose gate-keeper status and small-minded view of women’s abilities will be one of Kayla’s biggest obstacles. Or maybe you’ll be the out-of-focus fledgling musician at an open-mic night.

Find all the info for the audition here.

Lincoln Exposed dates were announced yesterday for Feb. 4 through 7 at The Bourbon, Zoo Bar and Duffy’s.

Lincoln Exposed acts as the smaller, hyper-local mirror to October’s sprawling Lincoln Calling. The lineup appears to be still in-progress, so if you’re a Lincoln act and you want to play, e-mail promo@bourbontheatre.com with any scheduling requests limitations.

On to shows this weekend:

The Doneofits play The Sydney tonight with The Baberaham Lincolns and Thoughts. We featured The Doneofits track “Alien Invasion” on HN Radio this week, and the group is currently working on its third record. RSVP to the show here.

Tomorrow night, John Klemmensen and the Party play Reverb Lounge with DANA T and Wild Kingdom. Klemmensen and company are on the cusp of their next record, Party All Night, to be released in the first half of next year. RSVP here.

See a full list of shows this weekend on our events page.