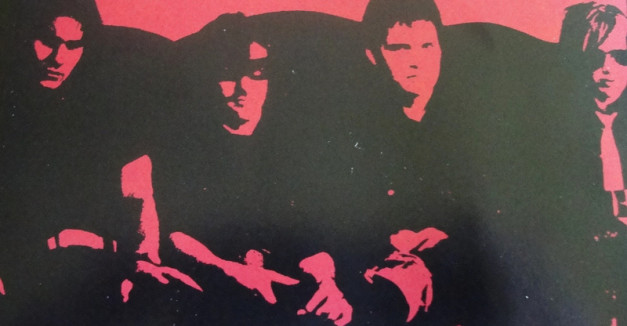 It was the early aughts — a small heyday of pop punk — the last time Omaha quartet Cuterthans was filling clubs with its synth-driven sound.

Not only will the Cuterthans reunite tonight at Lookout Lounge, but they’ll do so with a new batch of material on the way. The band plays with Masked Intruder, The Shidiots and DSM-5 (RSVP here).

The Cuterthans — comprising Jason Steady, Thad Steady and Handsome Marc — originally split in 2002, and have been largely dormant since. After one off Sokol Underground show in 2006 with Straight Outta Junior High, Treaty of Paris and VKS, the band fizzled again.

“We meant to keep playing shows after that last one, but then no one asked us to play and we didn’t feel like being proactive,” Jason says. “Nine years later, someone finally asked us.”

Jason, who also plays in Calm Fur (and, editor’s note, asked to be referred to by stage name only) says that he never stopped writing for the Cuterthans. The band will try to ramp things back up again with 7-inch release Too Many Chiefs, Not Enough Cuterthans, planned for early next year.

“90s nostalgia has been surprisingly kind, and we found a label right away to pay for everything,” Jason says.

That label is a new outfit called Gōner Rēcords, and that it exists is about all that Jason would say. But he tells HN that the Cuterthans plan to follow that record up with a full-length. We anticipate more news to follow.

Kit Lambert and Chris Stamp hold an amazing place in rock-and-roll history. However, the names are far from the household variety. Sharing space in the same stories as Pete Townshend, Roger Daltrey, and Keith Moon, Lambert and Stamp put their entire careers on hold to manage a brand new band from England in the late 1960’s. That band ended up being legendary rockers The Who.

Film Streams continues its Sights On Sounds series Sunday, Aug. 30 at 7 pm with a new documentary feature entitled Lambert and Stamp. The documentary details the relationship formed when two underground filmmakers stumble upon The Who while looking for subjects for a new movie. It includes interviews with surviving Who members Daltrey and Townshend as well as Stamp himself.

What begins as an interest in filming the band of “misfits” — as Stamp calls them — leads to the band hiring Lambert and Stamp as their new managers. The film details the meteoric rise of the band after the relationship was established in the late 1960’s. Seeing a period where the band released musical staples such as Tommy and Who’s Next, the documentary also focuses on the strong bond of friendship formed between the band and the two men who were sorely mismatched. But that mismatch created something electric.

“I think what sets Lambert & Stamp apart from other documentaries on The Who — and there are a number of them out there — is that it finds such an interesting angle: Two filmmakers with no music-business connections almost con their way into managing this young band, and it just gets bigger than anyone could imagine,” says Film Streams communications director Patrick Kinney.

“The more preposterous, the better,” a voice says, describing Lambert and Stamp’s ideas for the band, “the more adventurous, the more dangerous.” While members of the band admit the fact that the two had no inside knowledge or connections with anyone in the music industry, it is impossible to deny the fact that something Lambert and Stamp did for the band certainly worked. The Who surged creatively and musically, selling out arenas and turning into a historical event, working through significant money troubles and a laundry list of other problems to define a generation.

“I think with a group as big as The Who, it’s hard to find something new to say, but that’s exactly what director James D. Cooper has pulled off,” Kinney says. “Plus, the soundtrack is naturally going to be great.”

“A boisterous crowd packed into O’Leaver’s on Thursday night for a high energy show. The venue played host to three guitar-driven indie rock bands, with locals Eric In Outerspace and See Through Dresses kicking off show before headliner Beach Slang.

Omaha locals Eric In Outerspace led off the night, turning in a set of dreamy pop mixed with driving garage rock. Lead singer Sean Paul’s gritty, stream-of-consciousness vocals were reminiscent of Max Bemis of Say Anything.

Omaha shoegazers See Through Dresses ripped it up during their pummeling set. The group played through a hazy set of feedback-laden tracks off their self titled LP and Johnny, their self-released EP. Vocalists/guitarists Sara Bertuldo and Mathew Carroll gave dramatic performances: at times understated, at other times bombastic. Midway through the show, Bertuldo bopped out into the crowd, thrashing about, and jumped up on an empty chair, saluting with her guitar. The crowd roared its approval.

Headliners Beach Slang closed out the show to a crowd of about 100, many of whom were pushed right up front, face to face with the band. Formed in 2014 and based out of Philadelphia, the group plays a mix alternative and punk that sounds something like Japandroids crossed with early Goo Goo Dolls. Their debut LP “The Things We Do To Find People Who Feel Linebrke Us” is due out this fall, following up on two EPs released last year.

Lead vocalist and guitarist James Snyder has a gritty yet melodic vocal delivery, while lead guitarist Ruben Gallego provided unique ornamentation. The rhythm section of Ed McNulty on bass and JP Flexner on drums was dynamic and forceful, setting a blistering pace underneath the hazy guitar work. The band was relaxed in the intimate atmosphere in O’Leaver’s, which was exemplified by this particular non-sequitur from Snyder: “Somebody told me the other day that I look like Angus Young and Harry Potter had a baby, so I’m flying pretty high on that.” They dug into their melodic approach to guitar rock on songs like All Fuzzed Out and Dirty Cigarettes. The juxtaposition of melancholy lyrics and uplifting guitar lines was engaging, and not something that you hear often. It made for a refreshing, feel-good sort of show.”

Tomorrow night, Lookout Lounge will host the sixth Nebraska Hardcore Showcase. The lineup is a feast of mainstay hardcore bands and up-and-coming acts. In a unique format, each band will perform for 15 minutes, quickly shuffling from one set to the next.

Says Purgatory frontman and event co-organizer Matt Andersen: “The Nebraska Hardcore Showcase is a DIY fest put on by members of the local punk andhardcore community. There are no corporate sponsors and no production name needed. This fest is for the kids and by the kids. All are welcome and encouraged to bring people who have never been to an “extreme” music show before.”

Entry to the all-ages show is $5. DCYC kicks off the festivities at 3 p.m. RSVP here.

There’s plenty of shows for all tastes this weekend, so let’s get to the roundup.

Tomorrow night, Lincoln-bred jam-rock band the Yardapes play a reunion show at Vega. Since leaving the capital city in the early 2000’s, its members – vocalist Andy Brown, guitarist Glen Smith, bassist Mark Lee, drummer Casey Kinnan and rap/vocalist James Bleed — have spread across the globe. Kinnan lives in Nashville, playing in other bands as a session drummer. Bleed lives in Melbourne, Australia. Brown and Smith are the only two Nebraska residents, with Smith living in Omaha and playing bass for Manheim Steamroller.

In celebration of the reunion, Yardapes will release a new, yet-to-be-titled EP with music recorded in Lincoln with Chris Stefen at StudioPH, as well as recordings from sessions in Omaha, Nashville and Phoenix. Tremulant Records will re-release their Sonic EP and full-length Get Bent.

Tie These hands will open the 7 p.m. show. RSVP here.

Also tomorrow, Universe Contest returns from their brief midwest jaunt, and will play Duffy’s Tavern with DEERPEOPLE and Calm Fur. Earlier in the week, we published a Sonata Session with guitarist/vocalist Tim Carr, performing work from solo project WindpantS. See that video here. RSVP to the 9 p.m. show here.

For the rest of the massive weekend slate, head to our statewide calendar at hearnebraska.org/event. If you do not see your show or one you plan to attend, email us at news@hearnebraska.org, or add it yourself.
Going to a show this weekend? Hit us up on Twitter and Instagram via @hearnebraska. And keep those song submissions, story ideas and news tips coming.