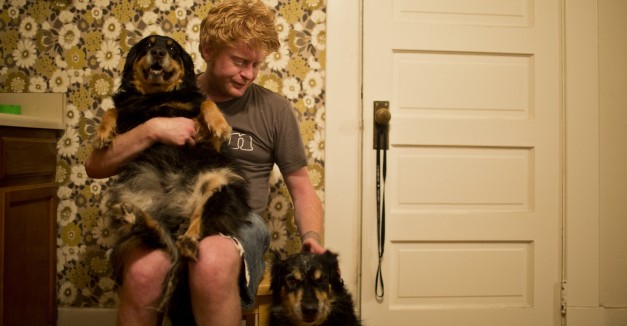 Tim Carr stands alone on his near-South front porch, toeing the line between carefree and forlorn.

It’s his last stop of the night, and it’s not only the suffocating humidity that presses down on him. “Jacksonville” is weighty and deliberate — not exactly cheery campfire material.

Most know Carr, of course, as the eccentric guitarist/vocalist in the ever-evolving Lincoln prog-rock band Universe Contest. WindpantS is the largely dormant basement-rock singer/songwriter project for which this song was written.

Carr unearths it here on his porch during a recent hazy mid-summer night. His jangly guitar work and crackly, spout-shouted voice recall early Universe Contest days when it might have been compared to Modest Mouse. Layers of looped guitars and muted-string percussion add sonic depth to an emotionally charged, Long Drive-esque epic.

Here is the latest Sonata Session, with a vocal appearances from canines Downtown Barb and Eda.