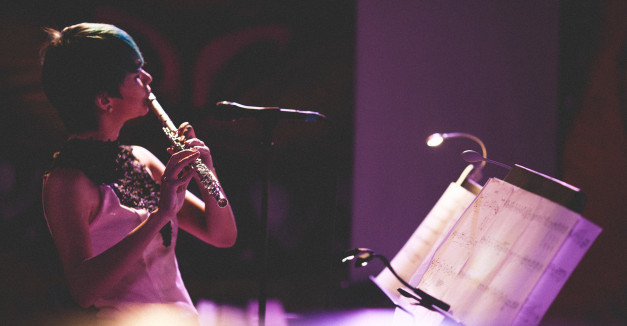 The experimental music and arts scene continues to grow in Nebraska, and the festival that aims to showcase it all is back this week for its second year.

Omaha Under The Radar returns Wednesday for a four-day slate of experimental performances in dance, music and theater. Acts hail from Omaha, New York, Chicago, San Francisco and more, and will be featured in six Omaha venues throughout the weekend.

The festival came together for the first time last year to showcase adventurous and alternative performers from the Midwest, and to connect the scene in Omaha with those from other cities.

“It would be an ultimate dream come true if OUTR and Omaha became an incubator and central hub for the development of new experimental performance work,” says director Amanda DeBoer Bartlett.

Not only does that mean mixing local and national acts to foster diversity and collaboration, but logistically, UTR organizers have spread the schedule out so that an enterprising patron can attend all 12 performances. Participating venues include Joslyn Art Museum, KANEKO, Sokol Auditorium, House of Loom, Bancroft Street Market, Barley Street Tavern and W. Dale Clark Library.

“An active contemporary performance scene needs venues, performers, and an engaged audience,” DeBoer Bartlett says. “If we can be a small part in strengthening that community, we’d feel successful.”

Festival organizers are encouraged by the fact that OUTR received more applicants this year than slots in the festival. While that means some are left out, DeBoer Bartlett sees it as evidence of a need for more experimental performance opportunities. Expanding their operations to accommodate that remains a consistent goal.

“We would love to have the means to present more concerts throughout the year, and we’re building our resources to be able to do that,” DeBoer Bartlett says.

OUTR opens Wednesday at KANEKO creative space with a showcase from this year’s Soundry Camp, a first-year workshop where students are currently building unconventional instruments and developing listening and improvisational skills. Throughout the weekend, House of Loom will host late-night electronic performances. The Joslyn, Sokol, Bancroft, Barley Street and the library will host a variety of different classical performances, open forums and theatrical numbers.

See the full schedule at Omaha Under the Radar’s website here, along with a complete artist roster and list of venues. Full festival passes are $30, and can be purchased here.

Omaha hip-hop duo Both has announced a new EP, on which a couple of special guests perform.

Bothsucks is scheduled for release Aug. 7 on Make Believe Recordings. It is the duo’s debut release on the label, and includes guest performances by Rothsteen and by Rhymesayers emcee Psalm One. The latter, dubbed “The First Lady of Rhymesayers,” is one of Chicago’s most promising independent hip-hop artists, and also works under the moniker Hologram Kizzie.

This follows up Both’s 2014 debut release, which you can still download here. Listen to our podcast review of it here.

There are a number of upcoming opportunities to see Both statewide, most notably at Maha Music Festival on Aug. 15. The duo will also perform the Scottsbluff/Gering stop of our Good Living tour July 19 at Five Rocks Amphitheater with blét and McCarthy Trenching (RSVP here).

Tonight on HNFM, we’re double-booked in a great way. CJ Mills and Xion will join us on the program. Mills is fresh off releasing her debut EP (listen here), and Xion will sing on stage with Josh Hoyer at ZooFest this Friday. As always, our show is 8 to 10 p.m. on KZUM. Turn the radio dial to 89.3 FM in Lincoln or visit www.kzum.org worldwide.

Also, Monday means it’s add-day for HN Radio. That’s our weekly streaming playlist, accessible at the top of every HearNebraska.org page. This week we’re spinning Lucas Kellison, Digital Leather, North of Neptune and a dozen others.

Tonight, Zoo Bar begins its week-long anniversary march to Zoo Fest with a performance from Sarah Potenza. The former frontwoman of Sarah and The Tall Boys recently finished a stint on NBC’s The Voice. She has been a staple at Nashville’s Bluebird Café and the globally broadcast Music City Roots program. The show starts at 5 p.m. with Emily Bass, and also includes the Zoo Bar House Band at 10 p.m. Entry to the entire evening is $10. RSVP here.

By the way, Zoo Bar will host an event each night this week leading up to Friday’s Zoo Fest, mixing national blues and roots acts with notable local ones. Here’s the schedule:

Lookout Lounge hosts a pair of San Pedro, Calif., punk bands in Toys That Kill and The Underground Railroad to Candyland. Notably, three of the four members of Toys That Kill also play in the Underground Railroad. Aside from their kinship in bouncy, surfy punk sound, sharing members would seem to make touring together practical, and should make for an interesting on-stage look. They’ll be joined by Omaha acts No Thanks and The Ridgeways. The all ages show starts at 8 p.m., and entry is $8. RSVP here.

Over at The Waiting Room, Omaha rock trio Ledicious and rapper J Crum play a free show with Iowa band The Young Funk. RSVP here. The Young Funk just released new record Holla At The Moon in June, and are currently touring in support. Hear “Beautiful World” below, the album’s first single.

For a full listing of this week’s shows, check out our statewide calendar at hearnebraska.org/events. As always, feel free to email us at news@hearnebraska.org with show updates, news tips and story ideas.