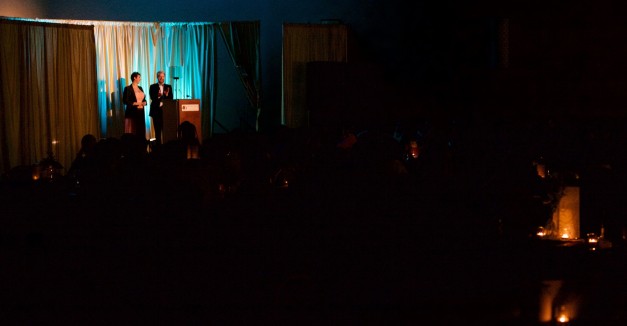 Omaha Entertainment and Arts Awards stretches into its 10th year

Over the course of a decade, the grooves of a tired routine are easy to lock into. That’s especially true for an awards show, which sees the same built-in ebb and flow year after year.

For its 10th anniversary, the Omaha Entertainment and Arts (OEA) Awards looks to buck that trend, revamping its festivities into a more streamlined, enjoyable celebration.

Since its inaugural season in 2006, the OEA board has strived to make its show as all-inclusive and representative as such a naturally exclusive event can be. More than 280 artists are recognized each year, selected by public, crowd-sourced nominees. With more than 50 artists winning awards in comprehensive categories in art, music and theater, it’s reach is widespread.

To that end, it’s board has swelled from five people in its nascency to 18. Those people, representatives from all over the scene, are responsible for parsing public nominations into categories that make sense across each arts community. The voting academy — comprising bartenders, sound engineers, journalists and others with scene knowledge — have the final vote.

“We’re not going to please everyone, but we do listen to feedback,” Cox says.”If anything, over the past 10 years, we’ve gotten [a lot ] right.”

By Cox’s admission, the day-of hasn’t always been as smooth. Last year, the OEAs employed a new sound vendor, new stage manager, two stages and more awards presenters than they knew what to do with. The results weren’t catastrophic, but it made for an unexpectedly rough evening. Cox chalks it up to its growth outpacing their ability to reign it all in.

“We have some making up to do from last year,” Cox says. “Last year’s show was disappointing … definitely our hardest [with] our most lessons learned.”

She expects this Sunday’s show to be head and shoulders above the last. They brought on a director, Rita Heaston Clark, who along with a production and stage manager will aim to ensure everything runs efficiently. Clark was an original board member for the show’s first five years, and the former event coordinator for the Aksarben Rodeo. She currently serves as Events Coordinator with Catholic Charities and Douglas County Fair.

Among other changes, the OEAs have whittle the number of presenters down to 10, with five separate segments to organize the night. Each artist will have representation of their product in some way through four videos, divided into the four seasons throughout the nomination year. Coupled with an eclectic lineup of performances that includes the Hector Anchondo Band, Both, Mariachi Zapata and more, it’s a new look that Cox hopes will reset the mold.

“We have such a great talent pool to choose from,” Cox says. “We’re lucky to have a diverse group.”

With all of the logistics sewn up, the OEA board will be ready to simply enjoy the evening. And with a few surprises on tap, Cox hopes attendees and nominees alike will too.

“It’s nerve racking,” Cox says. “If it all comes together it’ll be pretty cool.”

The 10th annual Omaha Entertainment and Arts Awards are Sunday, Jan 17 at DoubleTree Omaha. The red-carpet cocktail hour starts at 6 p.m., with the awards show at 7 p.m. Tickets are still on sale here. Don’t forget the free after party at Slowdown with Kait Berreckman and SharkWeek (RSVP here).

Raise the Roots aims to connect community with sustainability initiatives

A group of sustainability-minded Omaha residents are taking an artistic approach to community engagement.

Raise the Roots is a quarterly event designed to to nurture conversation and build community around sustainability initiatives. It combines local art, music, food vendors and community organizations in order to do advocacy through direct engagement.

“The first thing that comes to mind is putting people directly in touch with nonprofits and organizations that are making a difference towards sustainable living in our area,” says committee member Madeline Wahl.

The next Raise the Roots event is Sunday, Jan. 17 at the Waiting Room, with musical performances by Jocelyn, David Corbin, Topher Booth, Carl Miller & The Thrillers (RSVP here). Wahl says that people are more likely to respond positively and participate in community events, rather than stuffy committee meetings.

“By having the event at The Waiting Room — with good music, food and more of a networking approach — we hope that the community will have more an engagement in sustainability initiatives, local food initiatives and the cool things that are happening in our community,” Wahl says.

Raise the Roots rose out of a one-woman project called the Hootenanny, started by Lonetree Foods founder Lori Tatreau. The current nine-member committee banded together to assist Tatreau with myriad sustainability projects.

It’ll be another cold weekend. Warm up with a packed slate of shows:

Mezcal Brothers, Halfwit, Mesonjixx and O Street Brass Band at Vega – a mixed bag of a local lineup should have you moving about in all kinds of ways. It’s just $8 at the door, and the show starts at 8 p.m. RSVP here.

Mick’s Reunion with Sarah Benck, Korey Anderson and Michael Campbell at Reverb Lounge – this free singer/songwriter showcase is a reunion of sorts, remembering the closing Mick’s Music & Bar seven years ago. There will be candlelit tables and maybe lavender martinis? RSVP here and see for yourself.

For the rest in a packed weekend of shows, head to our statewide calendar at hearnebraska.org/events. Tell us where you plan to go in the comments, or hit us up on Twitter and Instagram using our @hearnebraska handle. And remember to keep those story ideas, song submissions and new tips coming.
Bundle up, and have a safe weekend.