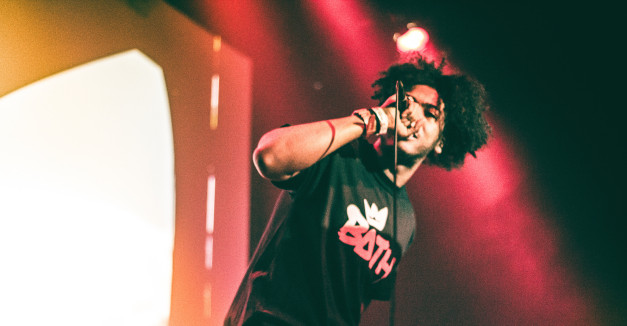 It’s been a busy year so far for Omaha hip-hop duo Both.

The pair, made of producer INFNTLP and emcee Scky Rei, played at Bottleneck in Lawrence earlier this week. Next month, they’ll head to South by Southwest after playing in Tulsa with Twinsmith on March 16.

Ahead of that, the Make Believe Recordings outfit released its first new music since its self-titled debut last May.

“Assassin” finds Scky Rei comfortable in his technique: ramping up intensity until each stanza nearly bursts, then backing off. The production comes closer to matching Scky’s delivery more than anything from Both’s album, where subdued lounge keyboards provided a foil to Scky’s growl. Listen below.

Both is one of 10 acts to be featured on volume three of our compilation album. We’re currently running a pre-order Kickstarter campaign for the vinyl. Find it here. You can also catch Both at the album’s Omaha release show with Jake Bellows and Ladyfinger at The Waiting Room on Apr. 18 (RSVP).

Keep an eye out for Comp’d, an in-the-works live music subscription service.

As reported by Omaha World Herald today, Dustin Trauernicht created the service as part of Startup Weekend Nebraska. Users would pay a monthly fee and gain access to shows at participating venues.

Still in its infancy, Trauernicht says his next step is to solidify partnerships with venues and promoters. But in the meantime, local music fans can sign up for the service here. You won’t be charged until the service launches later on.

Ideally, it could be a great way to save some money on show-going. If you attend four shows with $7 covers in one month, the $25 subscription has paid for itself.

As Trauernicht says, the service is in its nascent days. We imagine there will be some important specifics to iron out. We’d speculate Comp’d may be courting smaller shows, since promoters will not likely want to lose out on ticket sales from shows in the $15-$25 ticket range.

In that case, what would Comp’d mean for local and touring bands who rely on money from the door for payment each night? Who would swallow the potentially lost revenue: Comp’d, the venues and promoters, or bands? We’re interested to see how it works out.

Tim McMahan published episode two of his Lazy-i podcast this week. Listen below and visit it at its Reader home here.

Like the first episode, this one is a wrap-up of recent subjects touched on by Lazy-i, including talking with Mike Fratt Homer’s Records general manager in Omaha and live reviews of Matt Whipkey, Fire Retarded and Dumb Beach

Nebraska metal blog Badass Concerts published an interview with Sean Joyce this week, who you may recognize regardless of your involvement with metal music.

Joyce has been doing live audio in Lincoln since 2011 and now works at The Bourbon in Lincoln. Joyce also runs DreamPro studio, where he’s recorded Skummer, Wet Radio, The Sub-Vectors and more.

The all-cello octet has made its name on reinterpreting famous pop songs for the cello. The group is touring after its release of to e.s., a tribute album to Elliott Smith. The album includes six covers of Smith songs and six original compositions inspired by Smith songs.