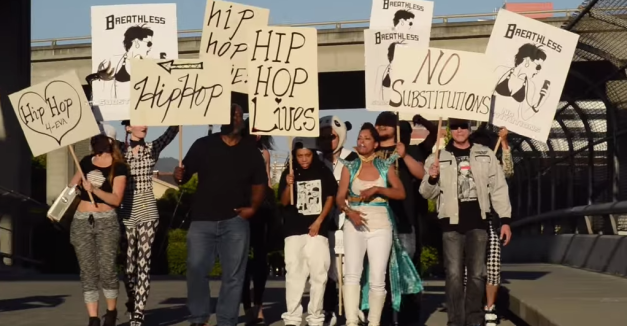 According to an email from Bold Nebraska yesterday, the show sold 6,500 tickets in the first 24 hours of being on sale. They then released a further 500, which subsequently sold out within six hours.

If you’re still looking for tickets to the Harvest the Hope show, don’t panic. You’ve still got time to find a spare ticket here or there, but the time has probably come to be diligent about it. Ask around, check Craigslist, you know.

Breathless aka Honey B released a music video for her track “Go Crazy” this week.

It’s a party banger and the video reflects that, featuring fire dancers and seaside dancing. Yet, the video takes on a socially conscious tone about two-thirds in when the Omaha artist leads a group of marchers carrying protest signs, like “Hip Hop or Die.”

Intentional or serendipitous, it visually draws allusions to the events in Ferguson, and more generally, to the social engagement and commentary at the heart of hip-hop.

In one of their first pieces for the fall semester, the University of Nebraska-Lincoln’s Daily Nebraskan published “10 local bands you don’t want to miss” to help initiate the unfamiliar (read: freshmen) with the music scene they’ve now made their neighbor.

The list spreads the love with pop-punk (Once A Pawn), R&B (TJ Saddler), electro-pop (Talking Mountain), and, of course, Universe Contest. Check out the list in full here.

Plenty of shows to check out this weekend.

The Colonel Mustard Amateur Attic Theatre Company’s production of Spiderman: The Musical…the Musical begins its two-night run this evening at Cooper Park in Lincoln. The musical comedy, Colonel Mustard’s fifth annual outdoor musical of the kind, will be one of their biggest yet, with food trucks catering to audiences. The event is free. RSVP here.

Matt Cox plays his Lincoln album release show for Nishnabotna  tonight at the Zoo Bar with local friends Jack Hotel, The Bottle Tops and Gerardo Meza. Cox and his band were on Hear Nebraska FM Monday night to play a few songs off the album and talk about the record. Check it out here and RSVP here.

Tomorrow night, Red Cities releases its debut full-length record at the Zoo Bar with Bogusman, Dirty Talker and Domestica. It’s sure to be just about as loud of a garage rock show you can find in Lincoln. RSVP here.

Kottonmouth Kings also plays in Lincoln tomorrow night at The Bourbon. The rap group has 19 records under its belt and another slated for release next year. They’re perhaps best known for 2002’s Rollin Stoned featuring “Rest of My Life.” RSVP here.